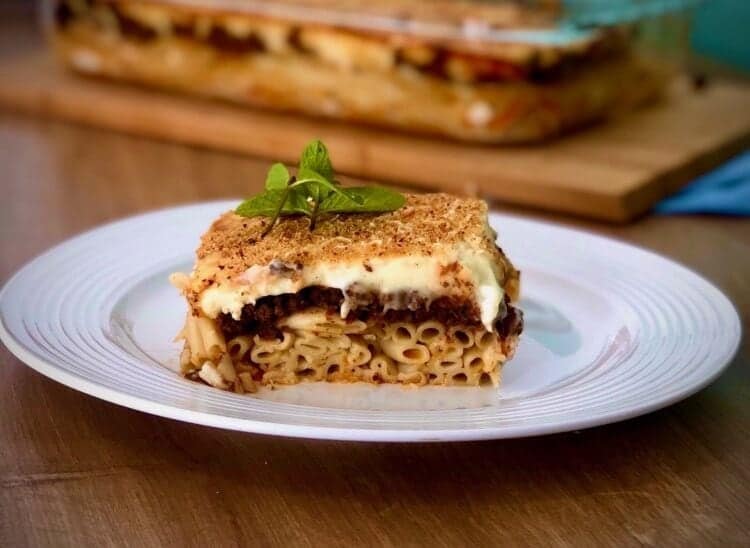 The Best Greek Pastitsio recipe (Pastichio)! An authentic Greek Lasagna dish to recreate this traditional delight just like my grandma used to make it! So go ahead, indulge yourself to this little sin.

What is Greek Pastitsio / Pastichio?

For the traditional pastitsio / Pasticcio recipe, layers of pasta, juicy minced beef and velvety béchamel sauce are baked together to create the ultimate Greek comfort food! Along with the legendary dish moussaka of course.

The beef is cooked in a tomato sauce along with aromatic spices. The traditional Greek pastitsio / pastichio recipe is what most people call “Greek lasagna”. And the beef sauce is similar to Italian Bolognese.

How to make traditional Greek Pastitsio?

Although it can be a challenging dish to prepare we summed up all the steps in three core steps so that you can easily make the very best pastitsio on your first try!

This easy to follow Greek pastitsio recipe can be summarised in three stages: cooking the pasta mixture, preparing the meat filling and preparing the béchamel. Truth is that the whole process will require dirtying some pans, but the end result is well worth it.

The authentic Greek Pastitsio recipe is made with bucatini pasta, a thick pasta like spaghetti with a hole running through the center. This is how you will eat the dish in almost every Greek household or restaurant. You could also substitude with ziti pasta or penne if you prefer.

The pasta base for this pastitsio recipe is mixed with Greek feta cheese and enriched with its sharp and distinctive taste. Just be careful to cook the pasta for the pastitsio 2-3 minutes less than the package instructions, so that they don’t get mushy after turning out of the oven later.

Greek pastitsio (pastichio/pasticcio/Pastizio) owes its distinctive and rich flavour to the two aromatic spices used in the meat sauce of the traditional pastitsio recipe, which are cinnamon and clove. Once put in the oven, the intense aromas of those spices bring back childhood memories.

To prepare the meat sauce for this pastitsio recipe, the ground beef is sautéed in olive oil, flavoured with onions and garlic and then simmered in red wine and tomato sauce. Let your sauce simmer for a while to allow the flavours to mingle.

The perfect béchamel sauce for your pastitsio should be smooth and creamy. To achieve the perfect texture the key is to add the milk (lukewarm) a little bit at a time whilst constantly stirring with a hand whisk. Whisk the sauce constantly and allow each time the flour to absorb the milk, so that it doesn’t get lumpy.

Cook the béchamel sauce over medium to low heat, so that it doesn’t burn and doesn’t stick on the bottom of the pan. Cook enough time, until you can’t taste the flour and is thick enough.

Once the béchamel sauce cools a bit and the grated cheese goes in, it will thicken a little bit. So keep that in mind to achieve the right texture. Even though it will be really hard, wait for a while until the pastitsio cools down, before cutting into pieces! 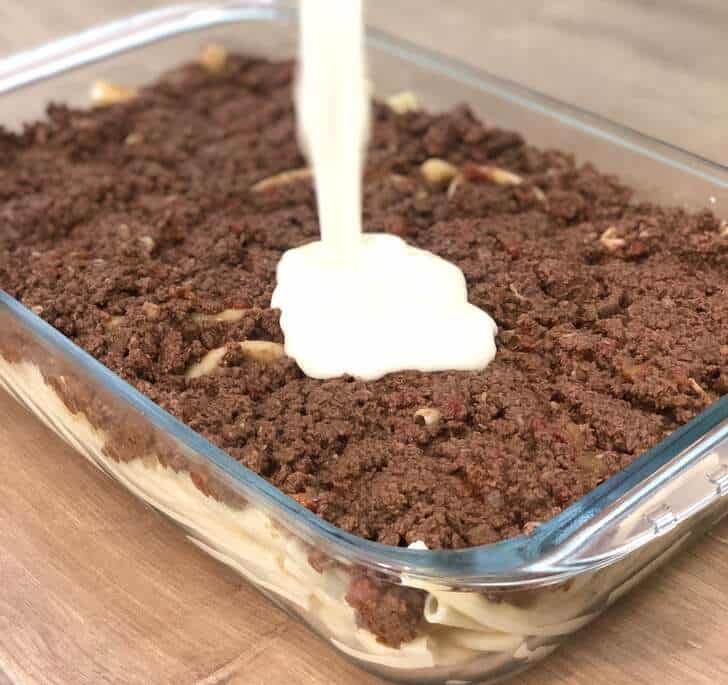 Can this Greek Pastitsio recipe Be made in Advance?

Making Greek Pastitsio can be a bit time consuming, so sometimes you will need to prepare it in advance. If you like to prepare pastitsio in advance, you can prepare the different components the previous night. All the components can be stored in the fridge. Assemble the pastitisio the next day, when it’s time to bake it.

Another option is to assemble the pastitsio, but not to bake it immediately. Instead, cover the casserole dish with plastic wrap and put it in the fridge. Next day put it straight in the oven and bake, according to the recipe instructions (step 5.)

Can you freeze baked Pastitsio / Pasticcio?

This pastitsio recipe can also be cooked in advance and freeze individual portions. Truth is that sometimes you will end up with leftovers, as it is a recipe for a big crowd. If you are cooking for less, you could either cut the recipe in half, or even better have some extra pieces in the freezer. Freeze cooked pastitsio, after it has cooled. When ready to serve, thaw in the freeze the previous night. Next day heat the pastitsio in the oven at 180C, until is warmed up.

So go ahead, give this traditional Pastitsio recipe a try and amaze your friends and family with this extra tasty hearty dish!

The Best Greek Pastitsio recipe (Pastichio)! An authentic Greek Lasagna recipe to recreate this traditional delight just like my grandma used to make it.

For the meat sauce