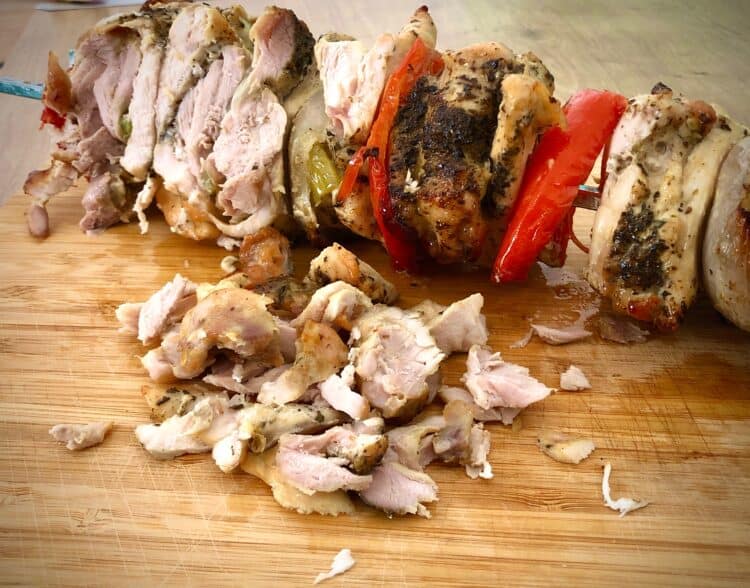 Souvlaki with gyro is one of the most popular street foods in Greece ( skewers / suvlaki / suflaki ), that is known and loved around the world. The traditional souvlaki with chicken gyro (yiros) recipe is actually a pita bread sandwich, filled with lots of spicy chicken, fresh juicy tomatoes, crunchy slices of onion and cooling tzatziki sauce. Simply irresistible!

Souvlaki stands for “meat-on-a-skewer”, however the majority of Greeks and especially those from Athens call any type of pita wrapped meat a souvlaki, specifying the type of meat and method of roasting separately. For example Souvlaki with pork Gyros or Souvlaki with Chicken Skewers etc.

The most important step in making this traditional chicken gyro recipe is nothing else but the marinade! For this chicken gyro recipe, the chicken is first marinated with onions and peppers along with Greek herbs and spices, to soak up all the wonderful Mediterranean flavours and then baked on a spit at high temperature, to get all crunchy and nicely coloured.

Tip: Marinading your chicken gyro in the fridge for at least 2-3 hours will allow the aromas to infuse the gyro meat and give it the desired flavours.

How to Serve Chicken gyro the traditional Greek way

The best way to serve chicken gyro is nothing other than wrapped in a delicious traditional Greek pita. Finding the original Greek pita can be quite challenging as most supermarkets stock only the arabian style ones but you can most likely find them at your local Greek deli or amazon (here and here).

However as we all know, nothing compares to home-made, so you can also make your own homemade pita bread with this super easy recipe.

Of course tzatziki is the preferred sauce to garnish your chicken gyro and we have included one in the recipe below as well as in our video! Don’t forget to season with some salt and paprika, sweet or spicy if you like an extra kick. Most Greeks enjoy their traditional Greek chicken gyro souvlaki with some potato chips so feel free to try adding some as well.

Also if I’m making a proper BBQ platter I always love pairing them with some traditional Greek BBQ dishes like:

So go ahead, prepare this super easy Greek chicken gyro recipe for your friends and enjoy over some cold beer!

The best homemade Greek chicken gyro recipe with fluffy pita breads and creamy tzatziki sauce for you to recreate this authentic Greek delight from scratch!

For the chicken gyro marinade

For the chicken gyro