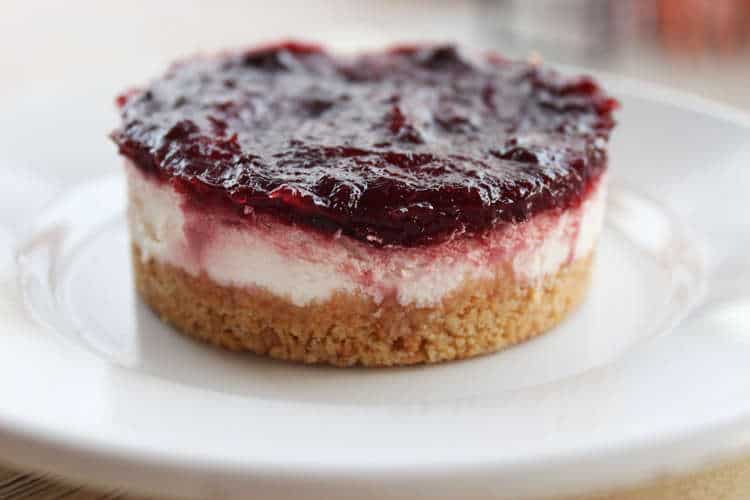 A lot of speculation abounds for the origin of the authentic cheesecake recipe, which in some cases it is claimed to be Greek. Being Greek myself and a cheesecake addict I would love to claim that too, but the truth is that even though cheesecake is a staple in every Greek household, I couldn’t be sure about its origin.

The fact is, that because cheesecake has been around for so long, and in so many different variations, the exact origin may be difficult to track.

Cheesecake is believed to have originated in ancient Greece. Historians say cheesecake was served to the athletes during the first Olympic Games held in 776 B.C. Greek brides and grooms were also known to use cheesecake as a wedding cake. The ingredients and recipe was pretty simple: flour, wheat, honey and cheese were formed into a cake and baked.

That being said, the one fact that is indisputable is that cheesecake is delicious and the rest is history. So instead of fighting over its origin, lets get started preparing your own homemade no bake Greek style cheesecake with this super easy cheesecake recipe!

Cheesecakes can be find in many variations. It may be baked or unbaked (usually refrigerated). The bottom layer (if there is one) often consists of a crust or base made from crushed biscuits or cookies, crackers, pastry, or sponge cake.

In most cheesecakes recipes sugar is added along with other ingredients for the cream and is topped with whipped cream, fruits or fruit sauce, chocolate syrup, nuts etc.

For this Greek cheesecake recipe we tried to keep it simple and to search for the most popular version served in Greece. So, for the base of this no bake Greek style cheesecake recipe we used crushed digestive biscuits and melted butter and for the cream we used cream cheese and whipped cream, Greek yogurt and honey. For the topping we used jam (choose your favorite). Enjoy!

A delicious and easy Greek style no bake cheesecake recipe! Creamy, rich and refreshing with a crunchy biscuit base and a delicious jam topping.