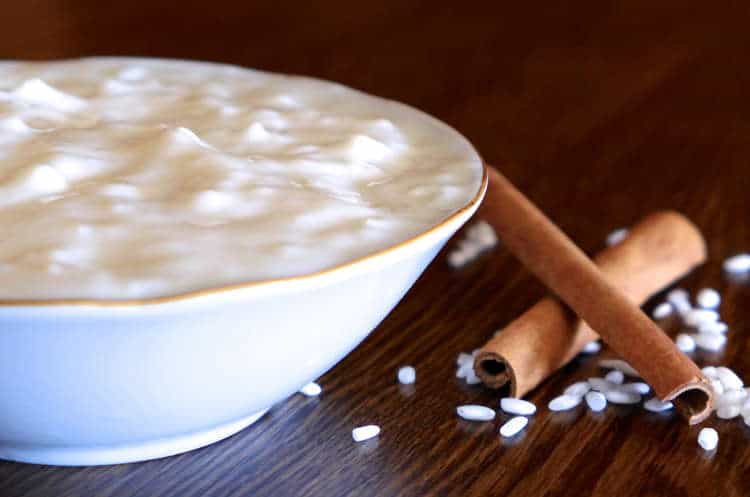 Homely, comforting and extra creamy! Greek rice pudding (rizogalo) is a no butter, egg-free traditional Greek recipe, which looks more like a thick custard than a pudding and is flavored with vanilla, lemon peel or orange zest. Perfectly served warm, at room temperature or straight out from the fridge, this extra creamy Greek rice pudding recipe (rizogalo) is a definite must-try treat for you and your family!

Rizogalo (Greek rice pudding) takes it’s name from the two basic ingredients used in its preparation (rizi=rice and gala=milk), which are combined and simmered until thick and velvety.

If you haven’t tried a Greek rice pudding before you will be surprised by the deliciousness of such humble ingredients when cooked together. A word of warning: it takes quite a bit of stirring for the pudding to thicken but the result will definitely reward you!

Some Greek rice pudding recipes use cornstarch to thicken the cream, but actually it is not necessary as the rice releases its starch giving rizogalo its creamy consistency and acting as a thickening agent. The traditional recipe for Greek rice pudding calls for a kind of rice called ‘glase’, which is usually used in soups; the next best thing is to use Arborio rice.

Serve this traditional Greek rice pudding as a delicious dessert, breakfast or mid-day snack with a sprinkle of cinnamon. Enjoy!

Homely, comforting and extra creamy! Find out how to make the perfect Greek rice pudding with this traditional, egg and butter free recipe, flavored with with vanilla, lemon peel or orange zest and garnished with fragrant cinnamon!