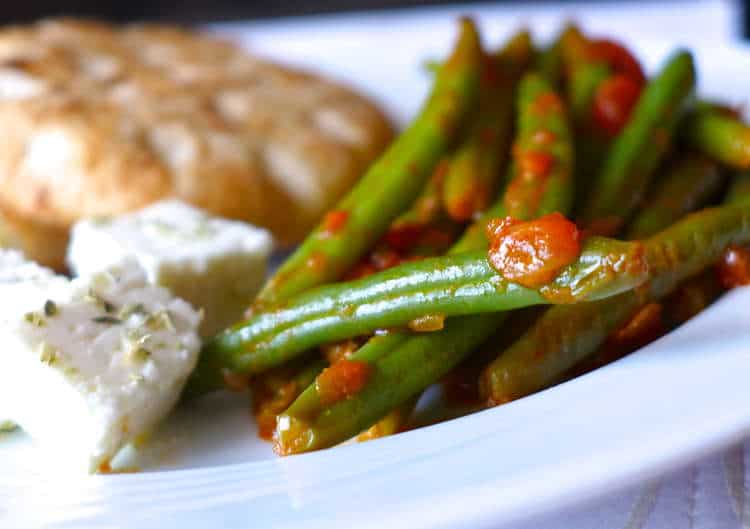 Hearty, healthy, and bursting with fresh and vibrant colors and flavors. This traditional Greek green beans recipe (Fasolakia giaxni) will certainly amaze you!

One can find many variations of this traditional Greek dish, with the most popular being this classic version and the Greek green beans with potatoes that I am also including in this recipe below!

So go ahead, read along to discover my tips and tricks to help you make it to perfection, how to make Greek Green beans with potatoes, how to prepare it in a slow cooker or instapot if you’re low on time of course, my delicious recipe! 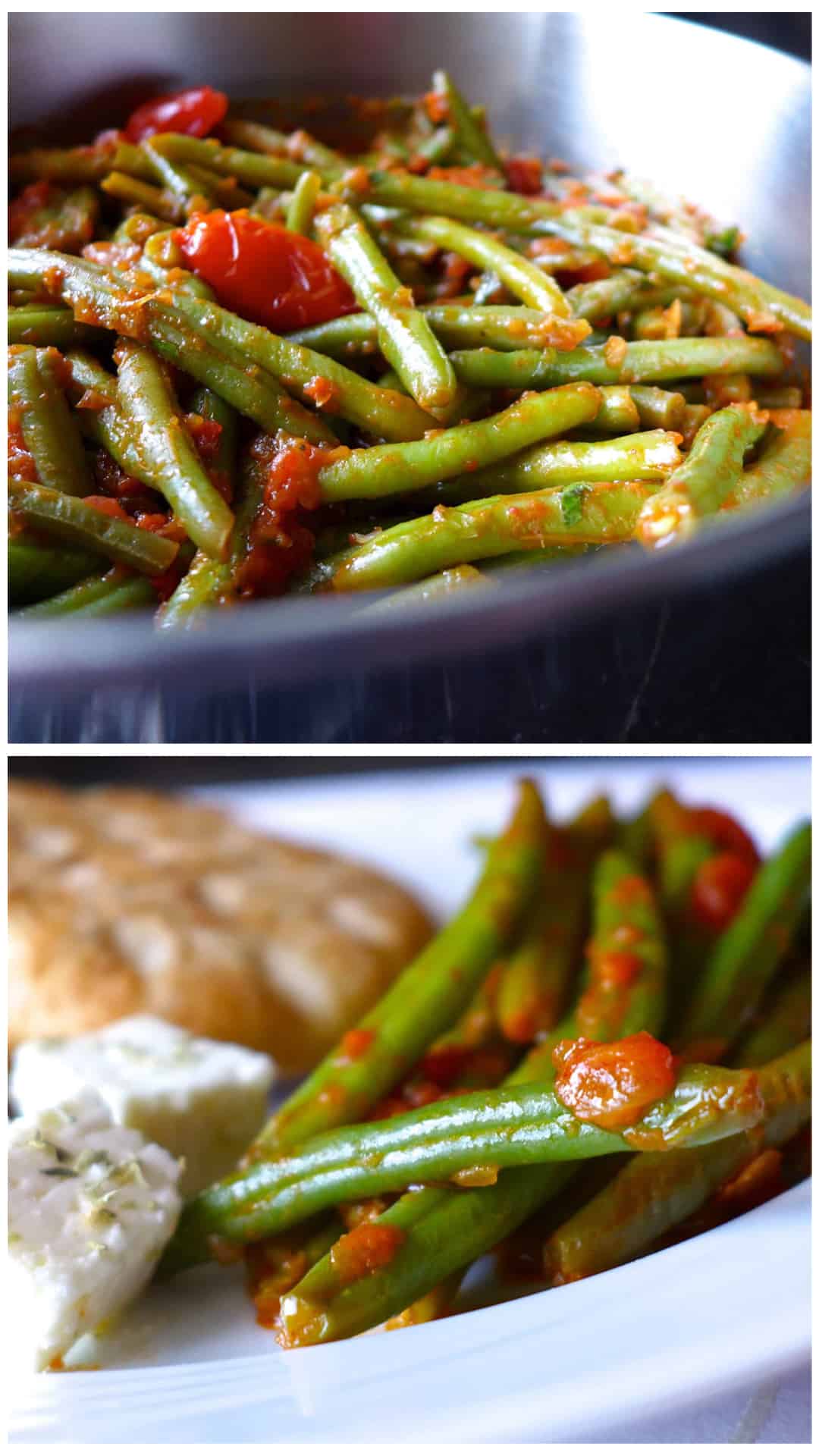 What are Greek Green Beans in tomato sauce?

This is a traditional Greek Green beans in tomato sauce recipe, which in Greek are called Fasolia or Fasolakia.

They are commonly known in English as braised green beans, but, when prepared, you might know also them by their Greek name: Fasolakia Lathera – the latter part meaning “ones with oil”.

These all dishes where vegetables are meant to be prepared only with olive oil, with no addition of other fat. So make sure to use some good quality extra virgin olive oil, which will give its own, unique taste to this dish!

What makes these Greek Green beans unique is that they are cooked in a delicious, thick tomato based sauce, soaked in plenty of olive oil, until they become soft yet still have some firmness to them. No mushy beans here!

Giaxni cooking, is a very popular technique used in different kinds of traditional Greek recipes, which may include meat, fish or vegetables, such as my country style greek potato stew (Patates giaxni) and Greek Okra stew with tomatoes recipes!

With Giaxni cooking you don’t stew the beans, but rather cook them in the juices already present in the tomato sauce, which turn to steam and get trapped inside when the lid is on! 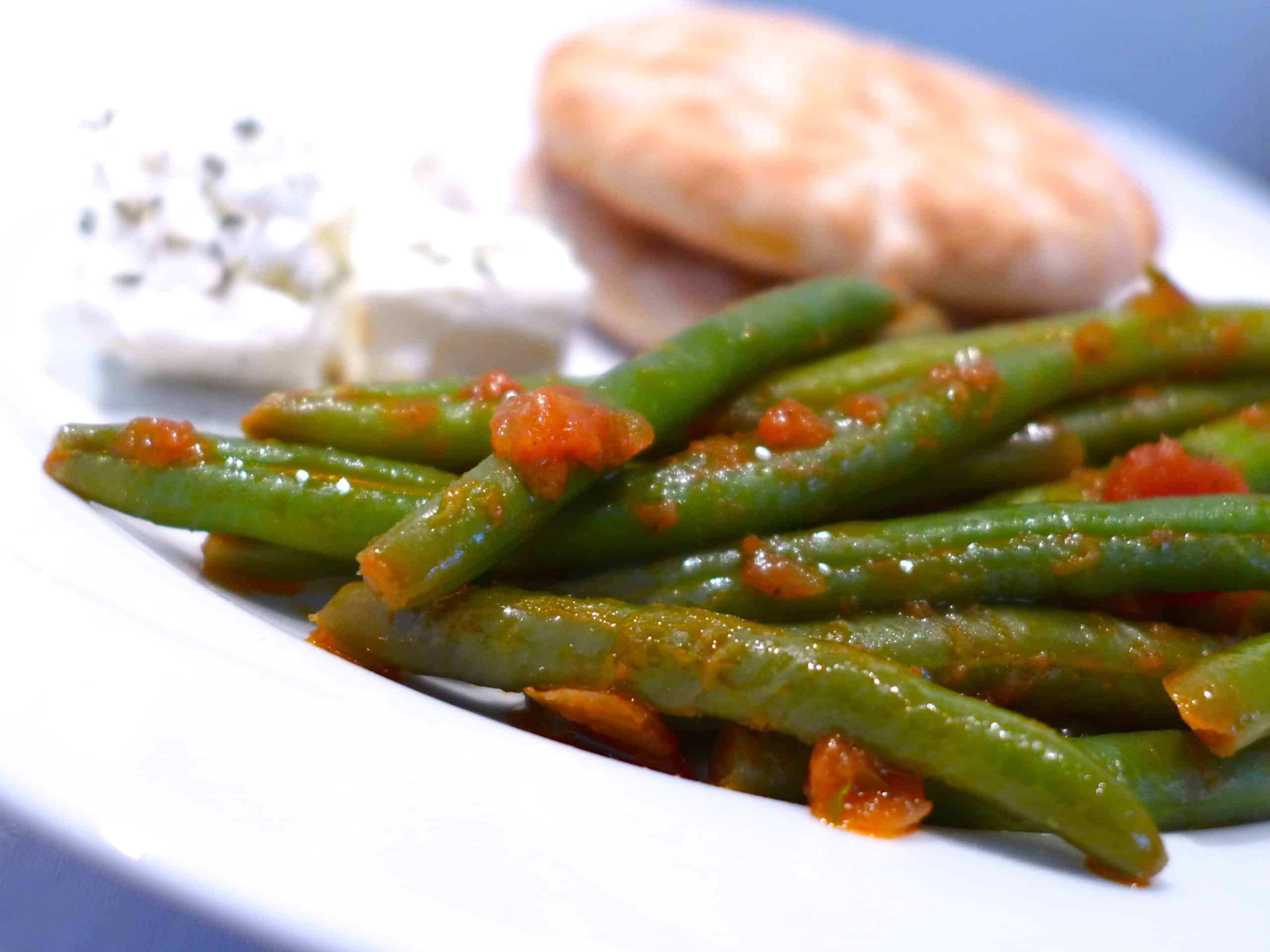 To prepare this Greek green beans recipe (fasolakia giaxni), firstly sauté the onions in half the oil, until tender and sweet. Then mix in the garlic, tomatoes and the rest of the olive oil to create the sauce.

I often add a pinch of sugar to offset the tanginess of the tomatoes, particularly if they are out of season. Traditionally, you would use fresh tomatoes here but canned chopped tomatoes or even Passatta would work.

Then add your prepared green beans. Make sure your string beans are coated in the sauce and simmer for about 30 minutes until cooked throughout. You might need to top with a little bit of hot water if the sauce dries out some during cooking.

Just before serving, add salt and pepper and chopped parsley. Or for something a little different, top with Greek Feta cheese and some Kalamata olives.

Do you need to peel (de-string) your green beans?

I fondly remember my grandmother spending her mornings peeling green beans when she was making this recipe for the family. However, in recent times, you would have noticed that, thankfully, green string beans don’t need to be peeled any more!

Due to selective breeding, the green string bean varieties that you get at your local store don’t have that string running down their side any more.

So, these days, the only thing you need to do to prepare your beans is to simply trim off their edges. Also, if you’re using frozen beans, they are already fully prepared for you.

You can also add some potatoes to your Green beans to make this dish even more hearty and filling. To make your Greek Green beans with potatoes, prepare the sauce but don’t add the beans just yet.

Cut your potatoes into medium sized cubes and add them in the sauce together with a glass of water. Boil them on low heat for 15 minutes, until the potatoes are just beginning to soften up.

Finally, add the green beans and cook for a further 30 minutes till the beans and potatoes are cooked and most of the sauce has evaporated. 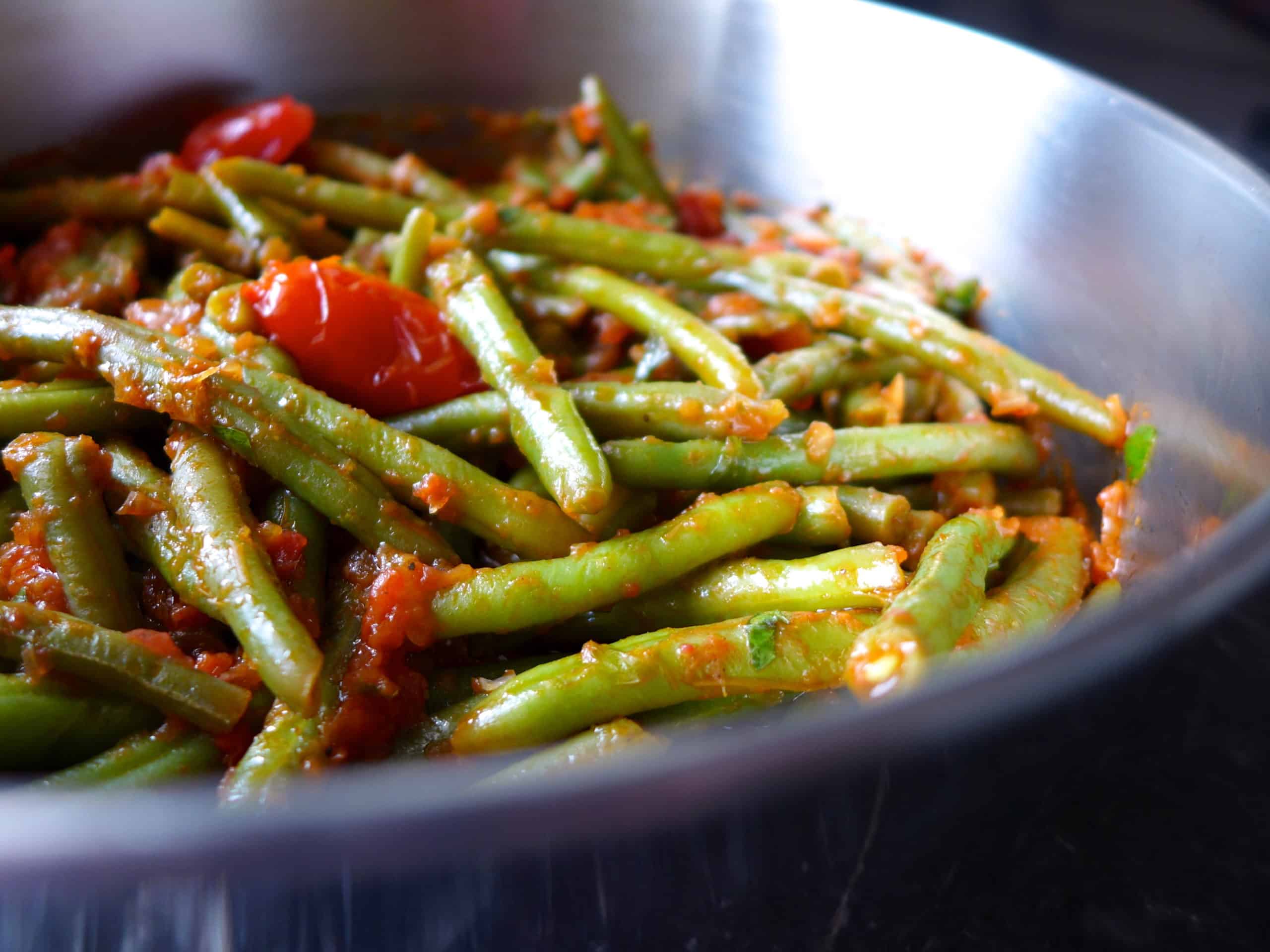 Preparing your Greek Green Beans in a slow cooker

If you want to make your Greek Green beans using your slow cooker, the best way to do it is to cook it is at the highest temperature. Sauté all the vegetables in a pan, add your beans, the tomato and seasoning then transfer over to your slow cooker.

Depending on the model, it could take 3-6 hours so I would check it regularly. You want to catch the beans where they still have some texture and aren’t too mushy. Also, as less water is evaporated when using your slow cooker, you most likely won’t need to add any during cooking.

Preparing your Greek Green Beans with an Instant Pot

To make the recipe with an Instant Pot, start by setting it to sauté to warm up. Add the oil and the chopped onions and sauté till translucent. Then stir in the garlic, tomatoes and a pinch of sugar and stir well. Finally add the prepared green beans. Stir well, till the beans are coated with the sauce.

Cover and secure the lid, set the valve to seal and set the manual or pressure cook timer to 15 minutes. Once the time is up, do a quick release and taste your dish. The beans should be soft but not mushy. Add any additional salt and pepper to taste. 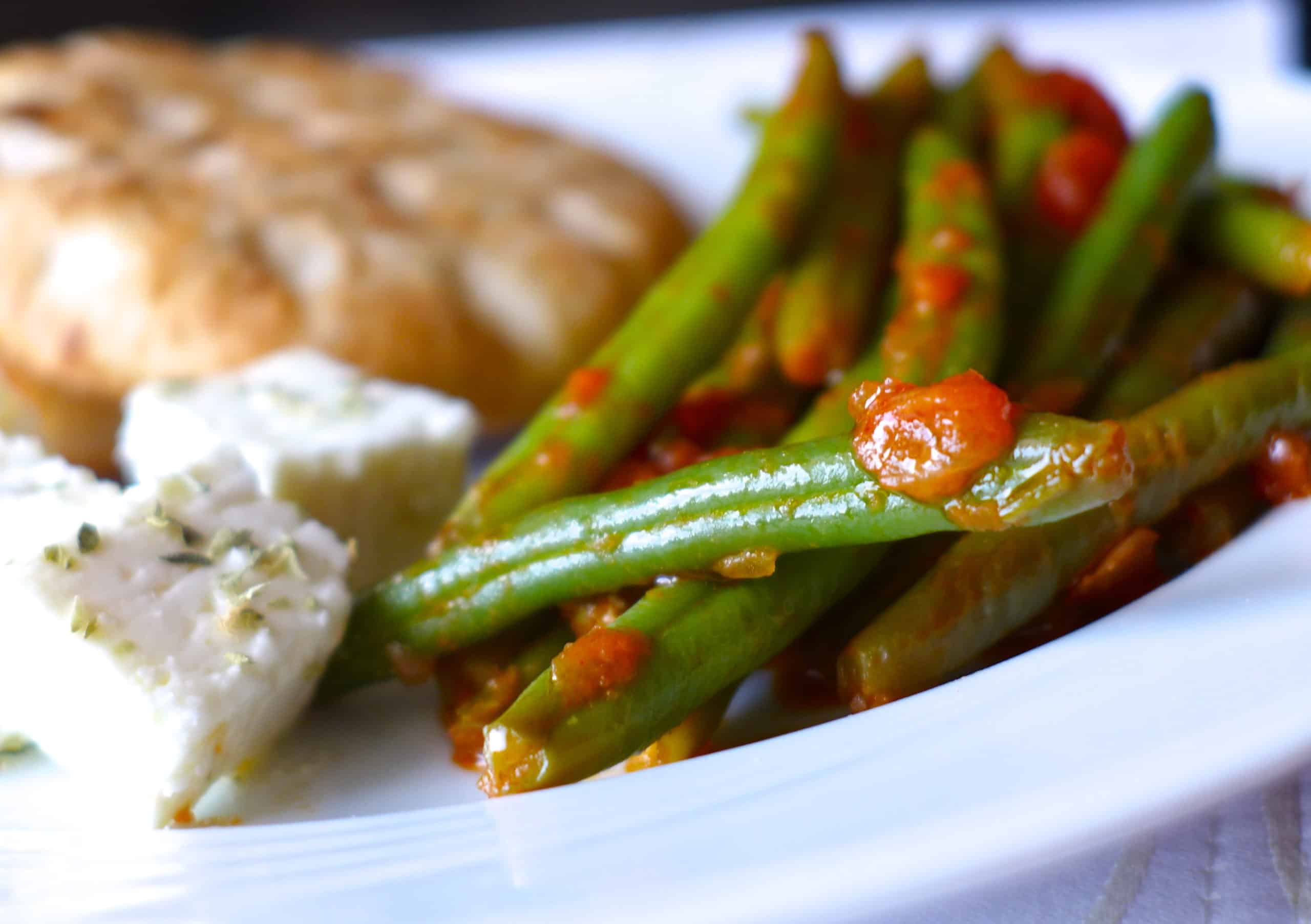 You can store the beans in the refrigerator in an airtight container for up to 3 days. Allow them to cool completely before putting them in the fridge. To reheat, simply toss them in a hot pan and warm them up till hot throughout.

Whether you are serving these green beans as an appetizer or side dish, they are always delicious! If I am cooking for myself and want something light, yet filling, then all it takes is some pita bread dipped into the flavorful sauce.

Crusty bread also works exceptionally well to mop up the delicious tomato sauce, with my favourites being my no knead bread, village bread and sourdough bread together with some delicious tzatziki or vegan tzatziki sauce as a delicious refreshing side!

If I’m looking to make it into the main course, then I serve them together with some grilled chicken or lamb which will make sure everyone gets their fill at mealtime!

If you love vegetable stews as much as I do these recipes are made for you!