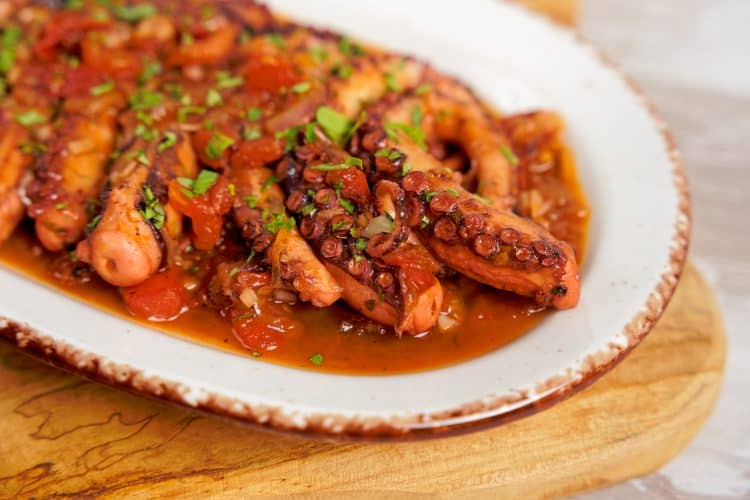 If you want to try something a classic Greek dish, then octopus is a must! This simple Greek-style octopus recipe means you can cook those tentacles perfectly with a simple process that also enhances their natural flavour!

This is an authentic Greek dish to serve at home any time you can get fresh octopus and bring back memories of your favourite summer holidays!

So read along to discover my delicious recipe, step by step photos and my tips and tricks to make it to a mouthwatering perfection! 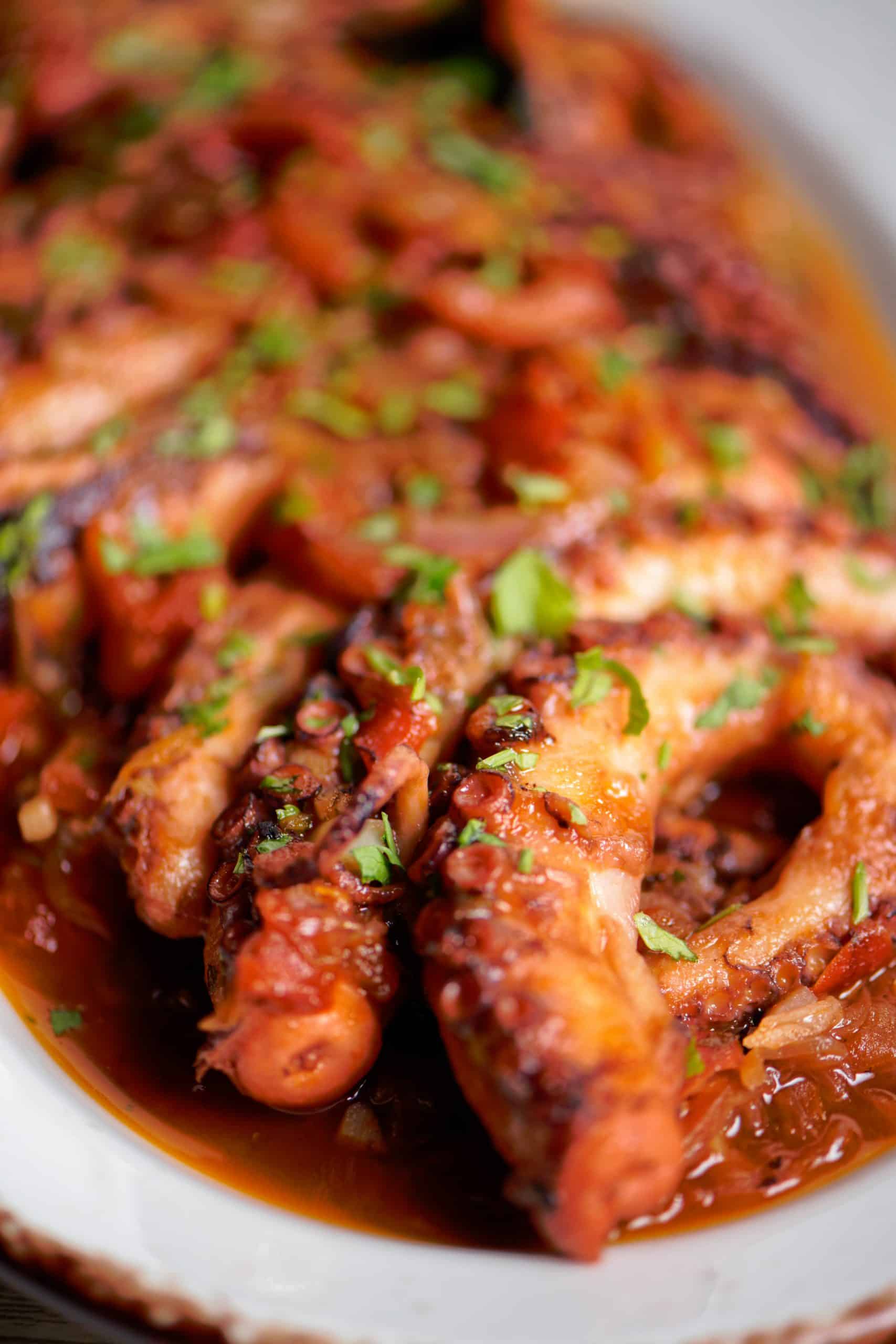 What is Xtapodi (Greek style octopus)?

Fresh octopus might not be a common sighting outside Greece but nonetheless, it’s one of those dishes that is worthwhile going out of your way to find (i.e. your local fishmonger…)!

For many years I have been wary of cooking this little delight at home, even though I was a huge fan when visiting a local tavern, especially during my summer island hopping! That is until one day I just decided to get over my fears and give them a try.

So I went to my local taverna and asked them for their recipe. And in typical Greek fashion, I was given a mini-master class in Octopus cooking by the head chef himself!

I was surprised to discover that there is really not that much into it. Boil it till done but still “crunchy”, fry it for that extra crispiness and deglaze with some fresh Mediterranean spices and ouzo! And oh my what a delight it turned out to be! 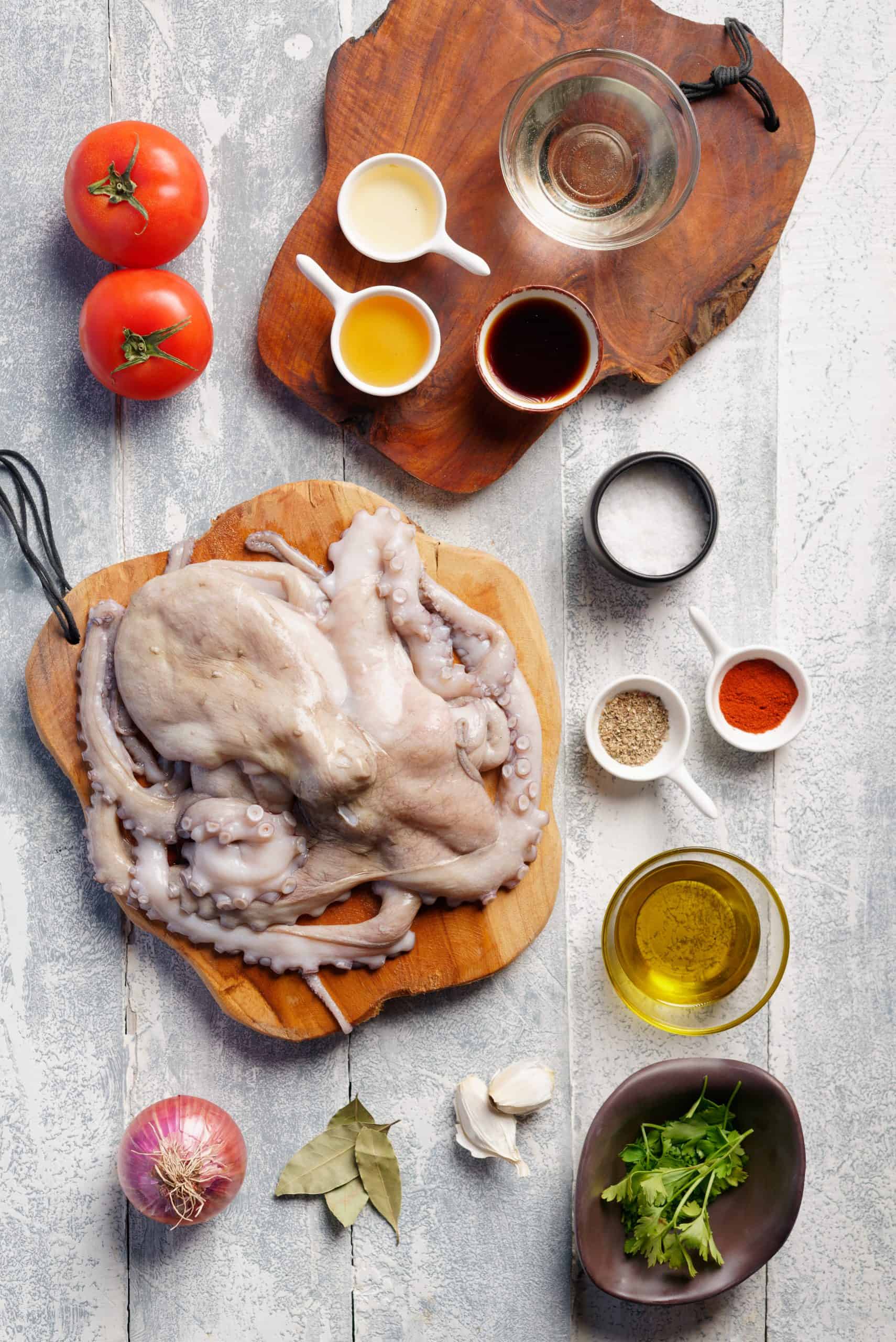 There are a few key ingredients needed to make you delicious Greek Octopus. 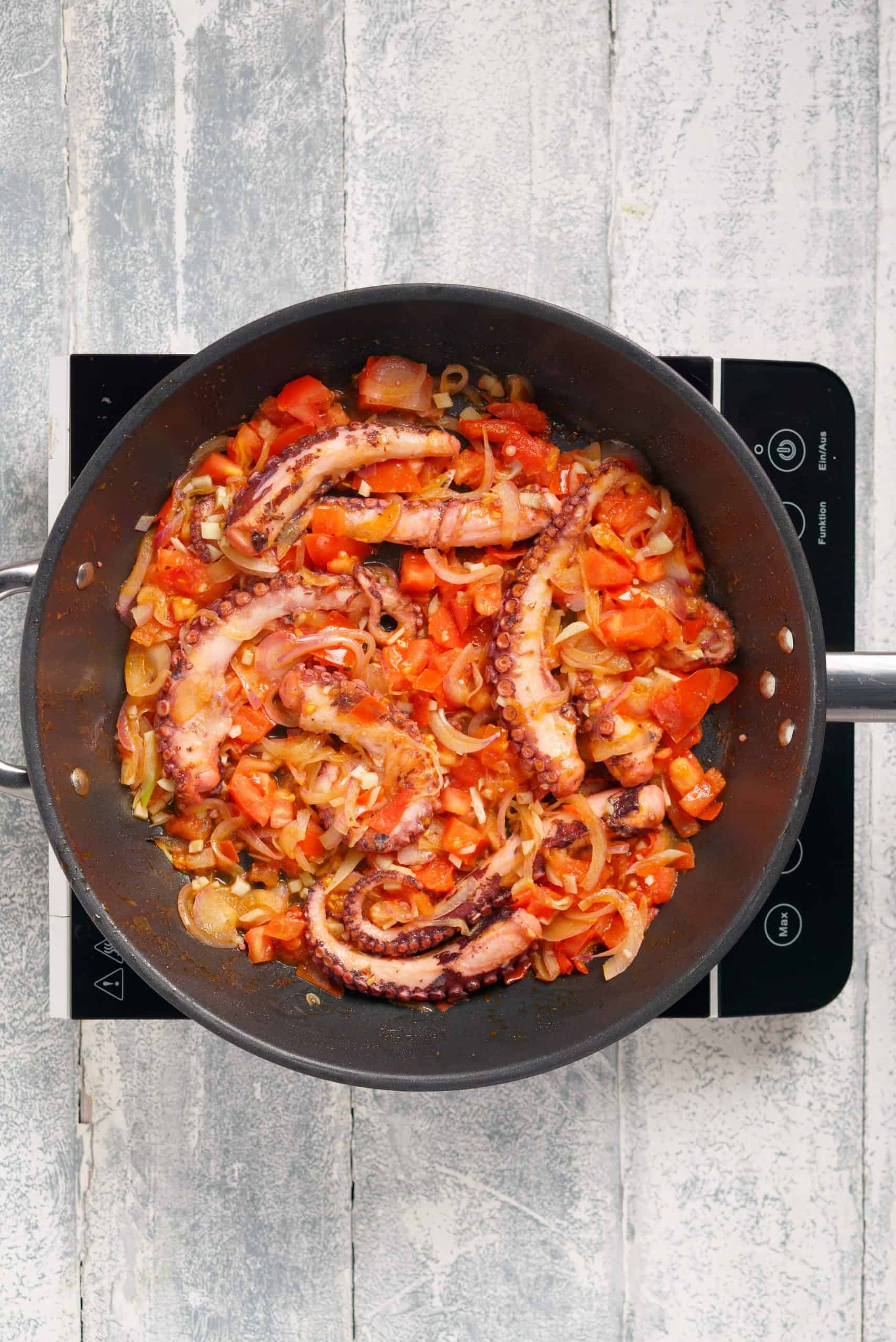 You can create the dish in just a few easy steps:

In a large saucepan, combine the octopus tentacles, red wine vinegar, wine and bay leaves and bring to the boil. On medium-low heat with the lid on, simmer for 40-60 minutes.

Make sure you don’t add any water to the octopus, as it will release enough water on its own. Also don’t add any salt since the octopus is already salty enough and be careful not to overcook it because it will get mushy.

The octopus should be slightly crunchy when cooked. Finally, remove the octopus from the pan and set it aside in a bowl with the juices in another one. 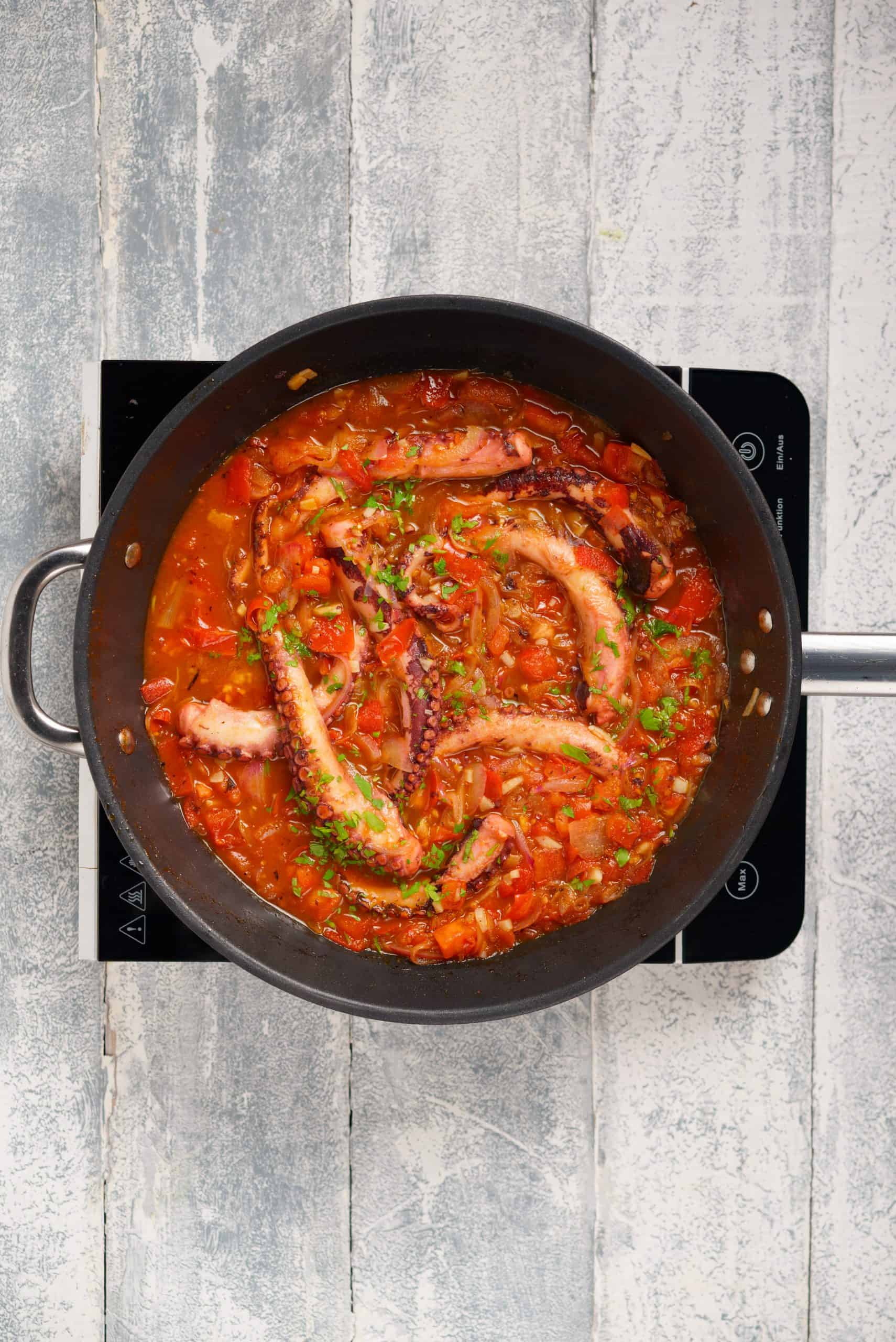 Sear it in a hot pan to make it crispy

Add the sliced onions and chopped tomatoes to the pan, along with 1-2 tablespoons of olive oil and a garlic clove or two, and stir. Let it cook for 5 minutes, stirring every so often, until the onions caramelize.

Deglaze the pan with balsamic vinegar, allowing it to evaporate before pouring the juices from boiling the octopus into the pan. Add 2 tbsps of honey, season with ground pepper and add some chopped parsley before cooking for 3-5 minutes. Its now ready to serve! 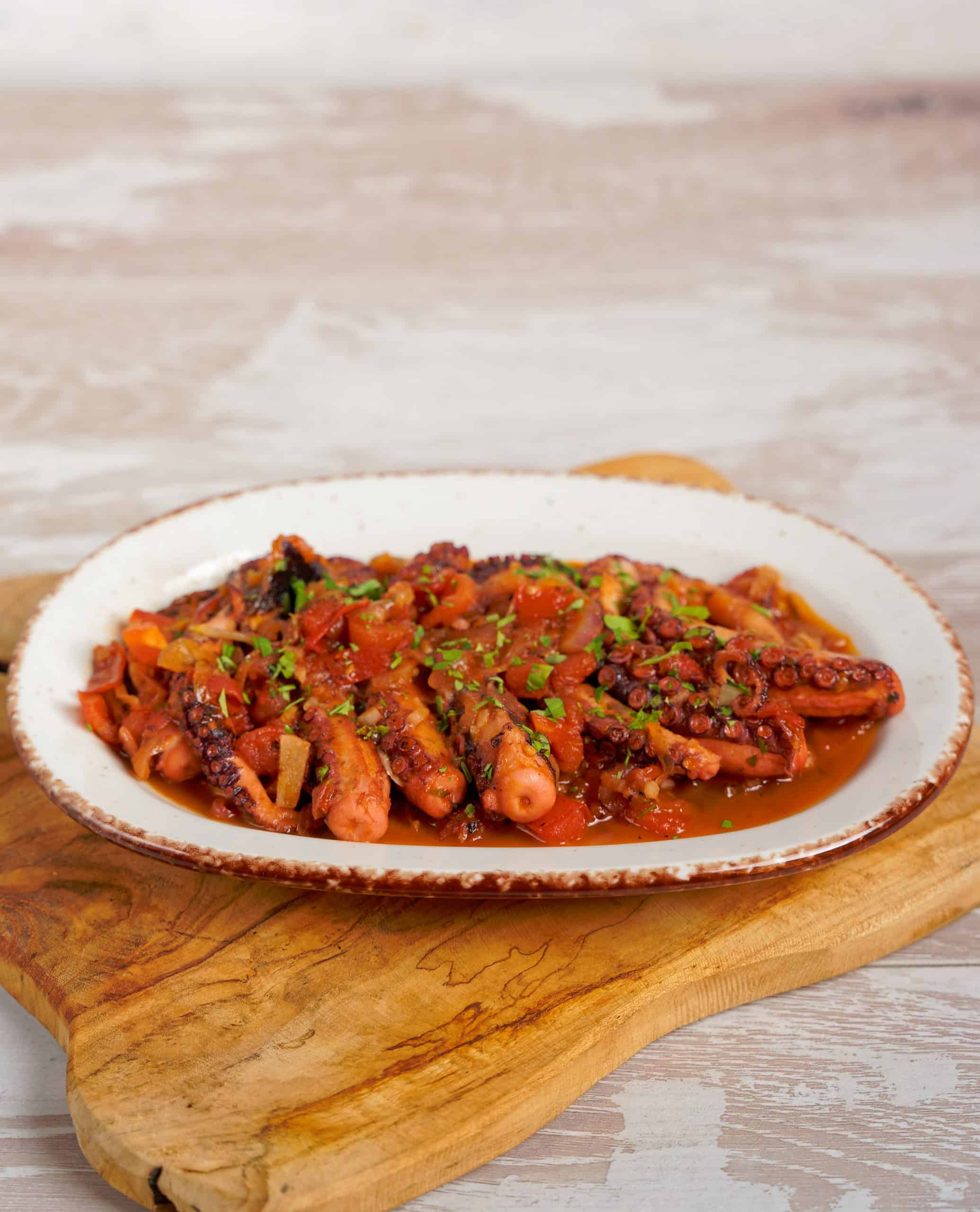 How do you prepare fresh octopus?

You can sometimes get the tentacles ready prepared to make this recipe but if you can’t and find yourself with a whole fresh octopus on your hands, here’s the basics of preparing it.

Under running water, remove the ink sac, stomach and eyes from the head cavity and dispose of them. You might want to wear rubber gloves for this bit! Then remove the beak at the bottom of the head with a sharp knife at the point where it joins the tentacles. 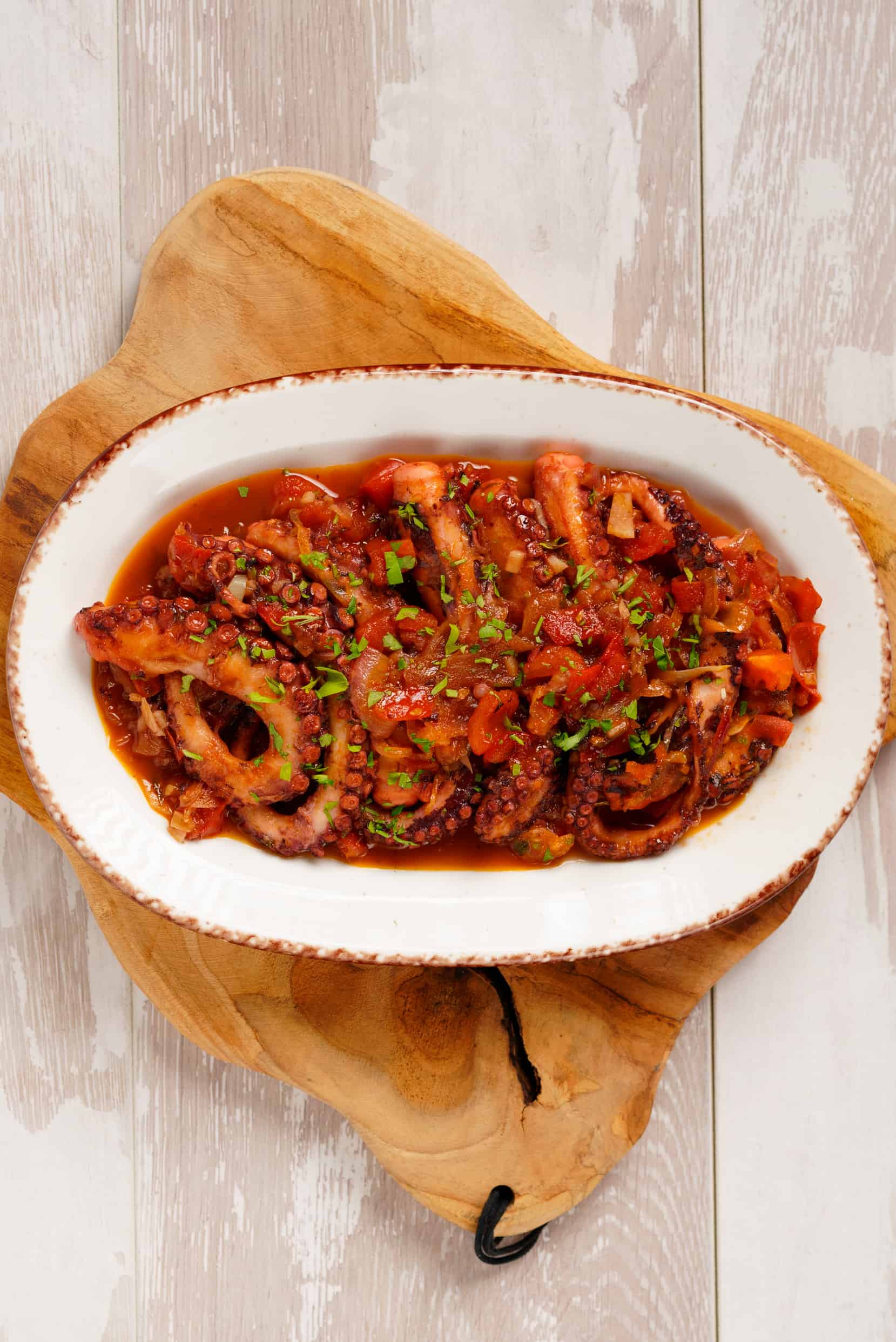 Fresh octopus will keep for approximately 72 hours in the refrigerator. It can be prepared within a day or frozen for up to two months. Cooked octopus, on the other hand, may stay in the fridge for up to three days.

Octopus can be frozen by being flash-frozen at a temperature of -18 degrees Celsius.

Octopus can last for up to a year in the freezer, but frozen cooked octopus should be consumed within two months after freezing. This is because the longer an octopus is kept in the freezer, the more likely it is to deteriorate in quality and texture.

Frozen cooked octopus may be stored in containers or plastic bags. Separate each piece of octopus before freezing it as a meal to ensure that the freezing process occurs more quickly and evenly. 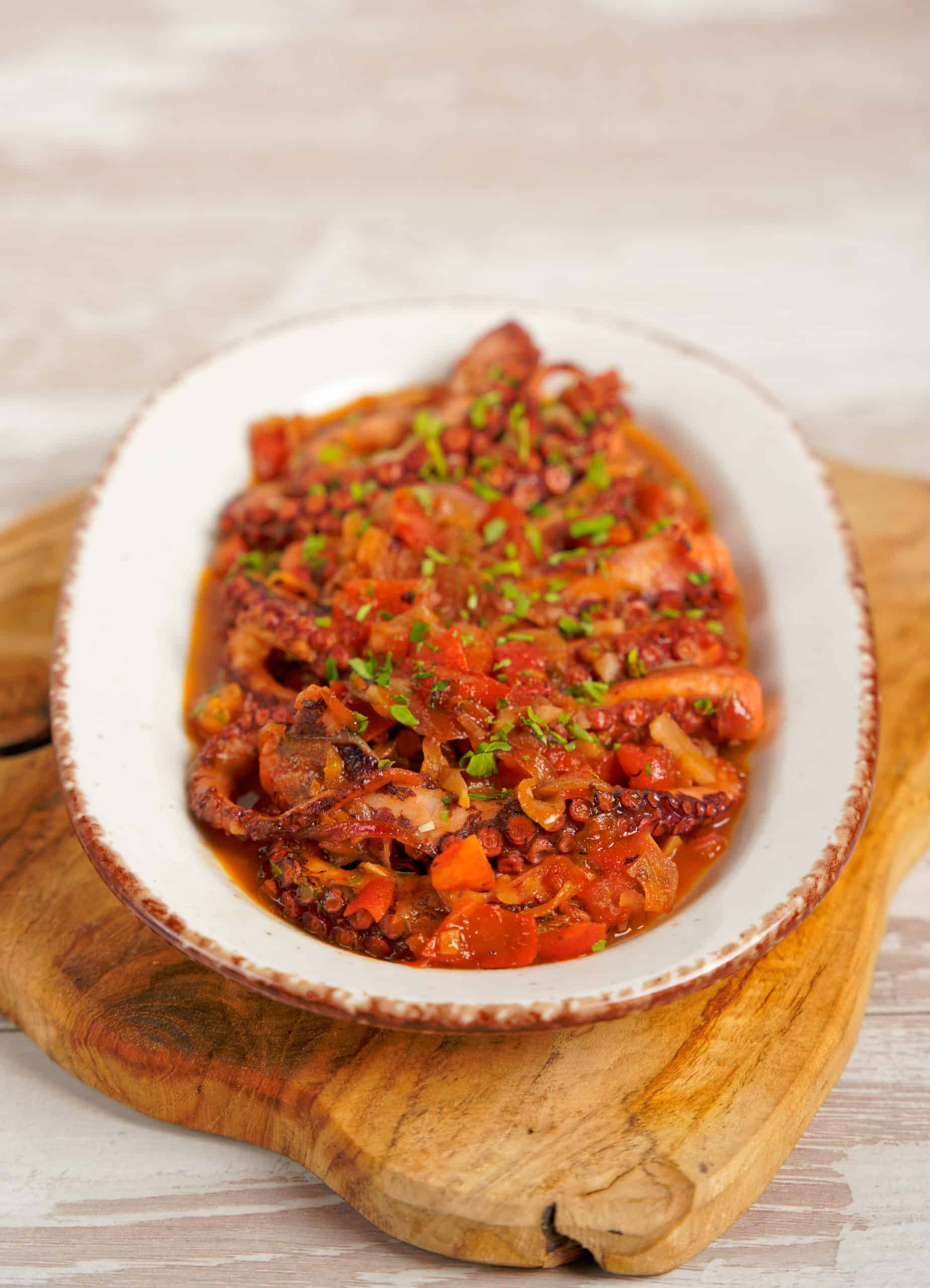 Potatoes are a versatile food that can be used as a side dish with octopus dishes. You can mash, cube, or slice them to create different textures that will pair well with the octopus.

You can serve it with a range of different breads including my rustic greek village bread, my no knead bread as well as a delicious sourdough bread and of course my home made greek pita breads to mop up that delicious sauce!

Also don’t forget to pair it with some mixed vegetables such as my delicious greek mixed roast vegetables (briam) and of course a delicious Greek Salad!

So go ahead, if you miss your summer holidays, this extra special Greek style octopus recipe will transport you straight to your favorite island! Enjoy!

This traditional Greek Octopus recipe will transfer you back to your favorite Greek island! Find out all the secrets to cook the perfect Greek style Octopus