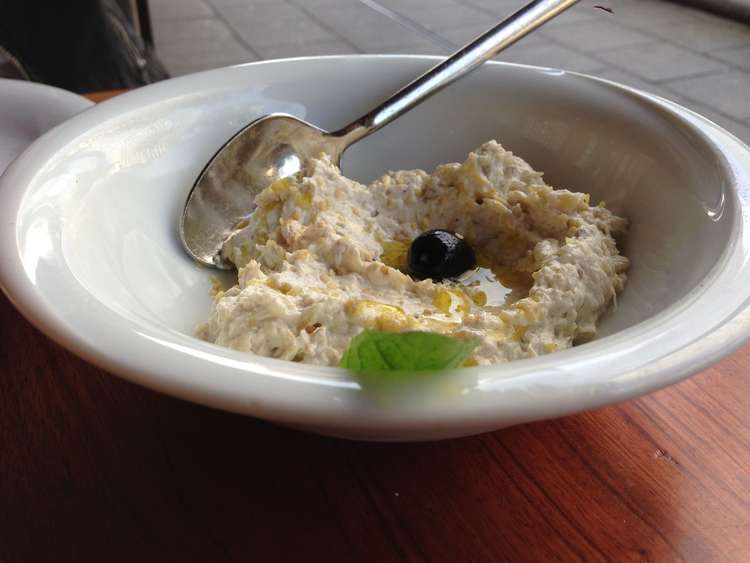 Encapsulate the essence of Greek cooking with this traditional Greek melitzanosalata recipe! A flavourful Greek eggplant dip, which is the perfect addition to your meze platter, a delicious side for a meaty dish or just on its own! This is the simplest, no fuss version of the traditional Greek melitzanosalata recipe with only three very simple, straightforward steps to follow.

In Greece, melitzanosalata is served as part of a meze platter together with some tzatziki, hummus, taramasalata, talatouri, tirokafteri (spicy feta cheese dip), fava (Yellow Split Peas Puree) and some delicious beef meatballs and lamb meatballs. Of course also by itself, with warm crusted bread or pita bread.

When preparing this traditional Greek melitzanosalata recipe, make sure you use some fresh aubergines and give them enough time to bake until soft and cooked throughout. If rushed, the aubergines can be quite bitter and the aubergine skin will not have had a chance to infuse the flesh with its light, smoky flavor.

Baking the eggplants will take about 50-60 minutes, depending on the size of the eggplants, so if you are in a rush you can bake them sliced (as explained in the recipe below).

For a different twist to this traditional Greek melitzanosalata recipe, try adding some crumbled feta (50-60g/2oz), which will give it a creamier look and a more intense, salty, Mediterranean flavour.

For the traditional Greek melitzanosalata recipe, the eggplants are added either diced, which gives more homely touch or all the ingredients are pulsed together, until smooth and creamy. Both alternatives are delicious, so it’s up to you to decide!

This traditional Greek eggplant dip (melitzanosalata) is best served with some crusty bread or homemade pitas and also as part of a meze platter with some spicy feta cheese dip. Enjoy!