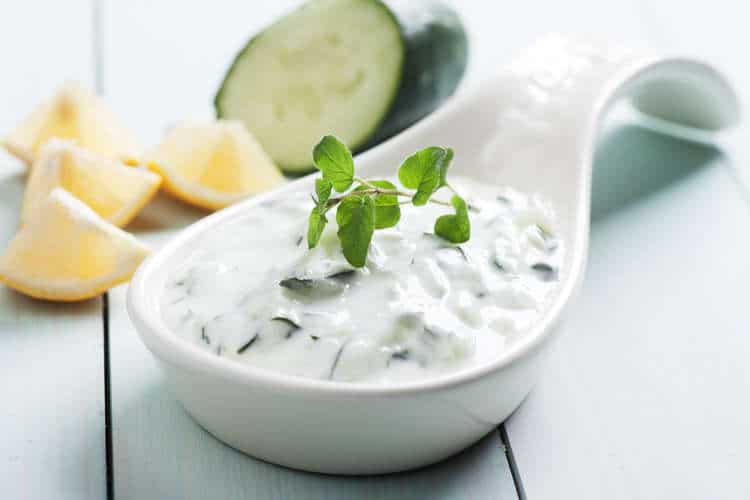 It is commonly served as part of a meze platter together with some tzatziki, hummus, taramasalata, Skordalia, melitzanosalata (aubergine dip), tirokafteri (spicy feta cheese dip), fava (Yellow Split Peas Puree) and some delicious beef meatballs and lamb meatballs. Of course also by itself, with warm crusted bread or pita bread.

Everyday we receive messages from our readers, asking if the traditional Tzatziki recipe is using mint or not, and if lemon juice or vinegar. So we decided to write about this traditional Cypriot dip, that is called Talatouri, which is also a yogurt based sauce very similar to Greek tzatziki.

The traditional Cypriot Talatouri recipe is made with fresh or dry mint and lemon juice instead of vinegar. These are the main differences from the Greek version of Tzatziki sauce, but we love them both! Hope you enjoy it!

Talatouri is a classic yogurt, garlic and cucumber sauce. It is a very simple and easy recipe, but in order to achieve the perfect texture you have to pay attention to the details.

The main ingredients for this traditional Cypriot Talatouri sauce recipe are plenty of garlic and creamy thick Greek yogurt. If you like garlic then this is definitely a recipe made for you and if you are not afraid of the smell use a little extra… Your tastebuds will thank you!

Probably the most important part when making a Cypriot Talatouri sauce recipe is the preparation of the cucumber. You need to use seedless cucumber or if you are using a seeded one, make sure to remove the seeds. Cucumber seeds bring along a little too much moisture in the Talatouri sauce, so their texture is not what we are looking for.

Grate the cucumber, using the large holes of the grater and dry it really well. We want to remove as much of the moisture of the pulp as possible, so that the Talatouri remains creamy.

When preparing this traditional Cypriot Talatouri recipe, it is very important to use the garlic minced or grated (not chopped) in order to avoid lumps and a mouthful of garlic..

Enjoy this authentic Cypriot Talatouri sauce recipe with a juicy souvlaki or with some warm pita breads! And if you are a vegan, take a look at my vegan tzatziki sauce recipe, where I take you through the best yogurts to use as well as how to make it so it tastes just like the original!

Mint or no mint? Everyday we receive messages from our readers, asking if the traditional Tzatziki recipe is using mint or not, and if lemon juice or vinegar. So we decided to write about this traditional Cypriot dip, that is called Talatouri, which is also a yogurt based sauce very similar to Greek tzatziki.