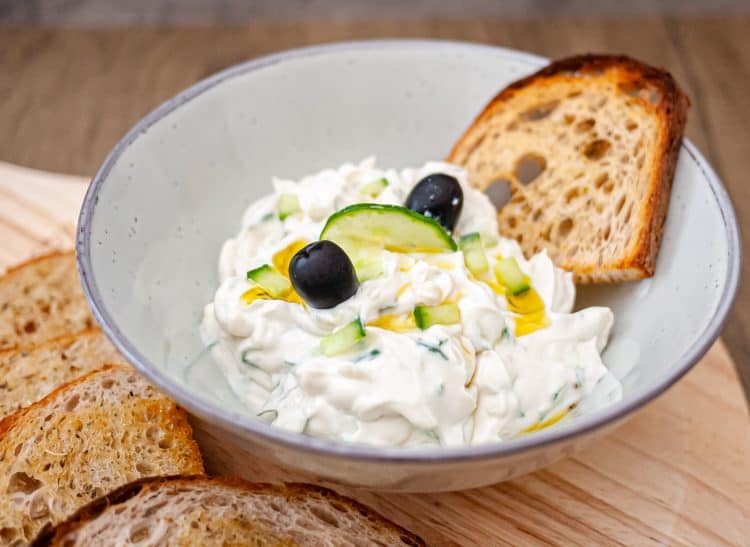 This is my ultimate Vegan Tzatziki recipe! Deliciously creamy, refreshing and, best of all, even though its dairy-free, it tastes just like the original! Perfect if you are following a vegan diet, are lactose intolerant or if you are fasting for the Easter and Christmas lent!

So read along to discover my vegan yogurt shoot-out to find the best vegan yogurt for your tzatziki, my step by step preparation photos and of course my delicious recipe and vegan dish pairing suggestions for you to make the best dairy-free tzatziki you have every had! 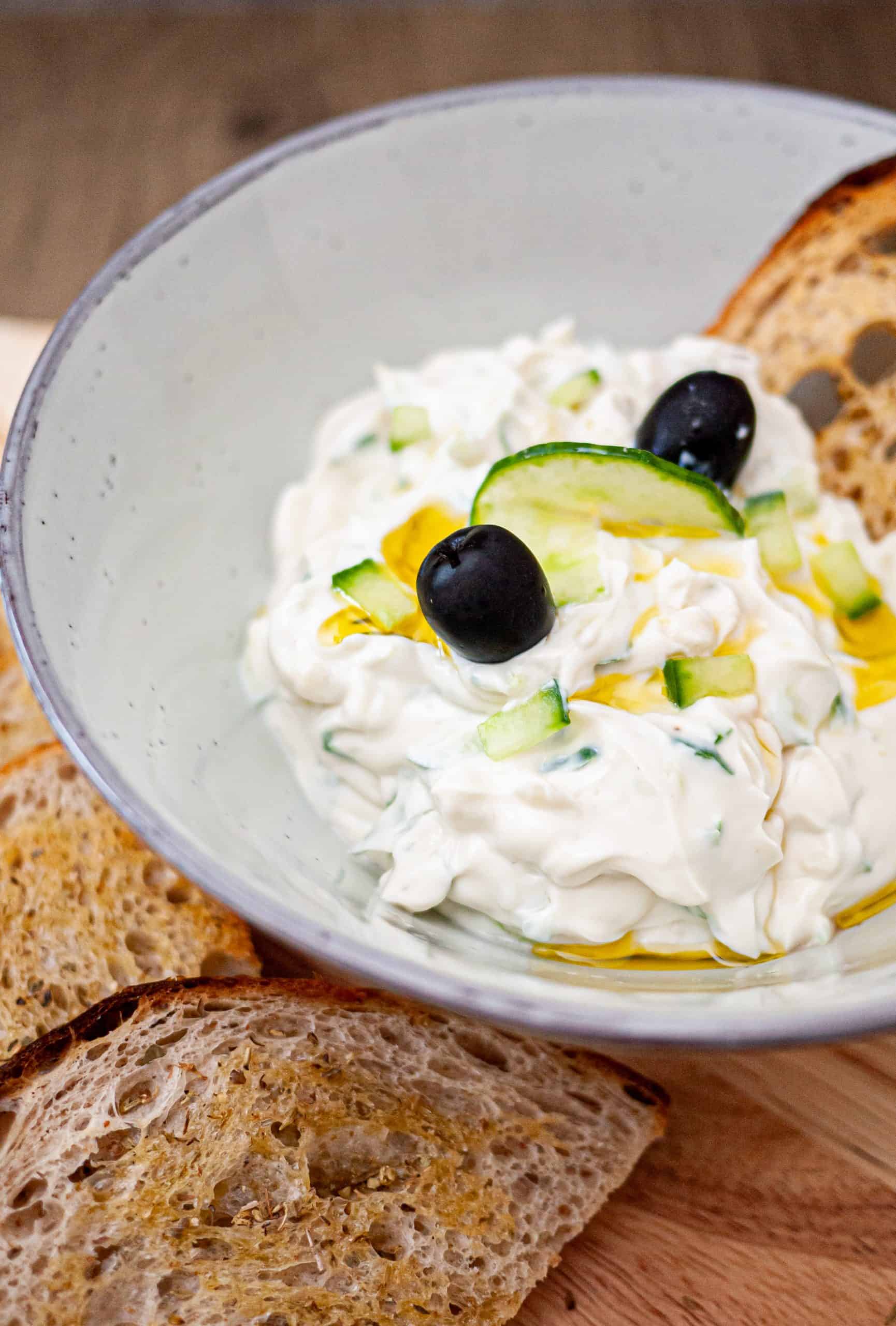 Tzatziki is a creamy, yoghurt based sauce, flavoured with minced garlic, grated cucumber, olive oil and vinegar. Tzatziki is commonly served as a dip, paired with sticks of cucumber and carrots or as part of a maze platter, together with some crusty bread and toasted pita breads!

The secret behind the traditional Greek tzatziki is its yoghurt. Traditionally, tzatziki is made with Greek yoghurt, which is different from your usual yogurts because it is strained and the excess milk whey is removed.

This straining process results in a much thicker yogurt that is also tangier and much creamier than plain yogurt. However, if you have ever tried a Vegan Tzatziki sauce before, you may have noticed that it just didn’t taste the same as the original. Why? It’s all because of the yogurt…

So, to make my Vegan Tzatziki taste just like the original I knew I had to find the best vegan yoghurt, one that tastes just like a strained Greek Yogurt. But how?

I tried all of the Greek style vegan yogurts available at your local supermarket – both branded and own brand, as well as their variations – soy, oat and coconut based.

I also tried the popular home-made “yogurts” which are made with ground up cashew nuts and soy. And I finally found one that is virtually indistinguishable from the original!

So let’s get started!

To make your dairy-free Vegan Tzatziki sauce to perfection you’ll need a handful of ingredients: 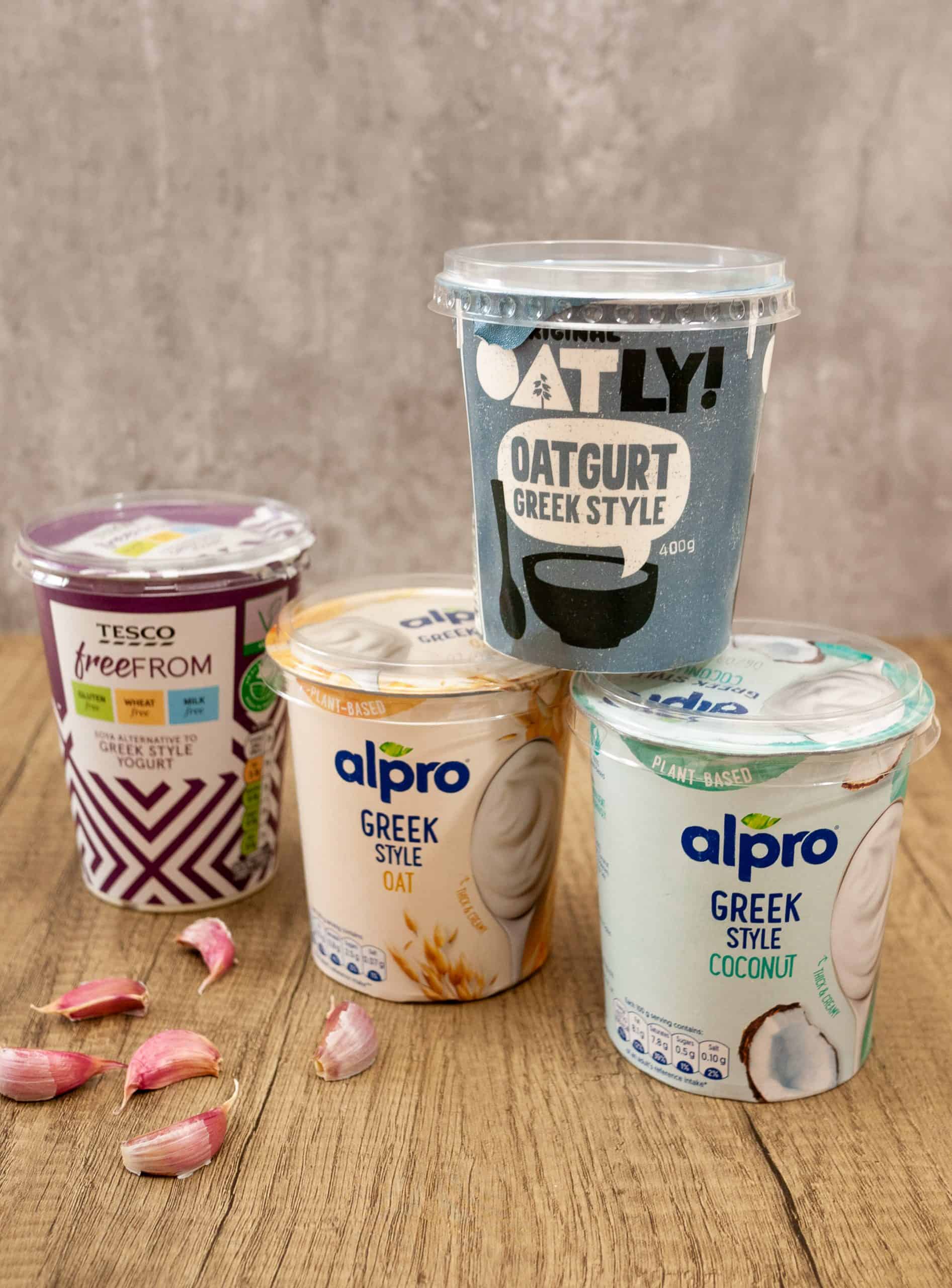 Picking the right yogurt for your vegan tzatziki

Since the basis for your vegan tzatziki is the dairy-free yogurt, we need one that closely resembles the taste, consistency, and color of the traditional strained Greek yoghurt. What we are looking for is:

With that in mind, I bought all the vegan yogurts I could find at my local supermarket and taste tested them to see how they compare against the original.

I tried both brand named ones as well as a store own brand as well as their three major variations – soy, oat and coconut based. And there was one clear winner! 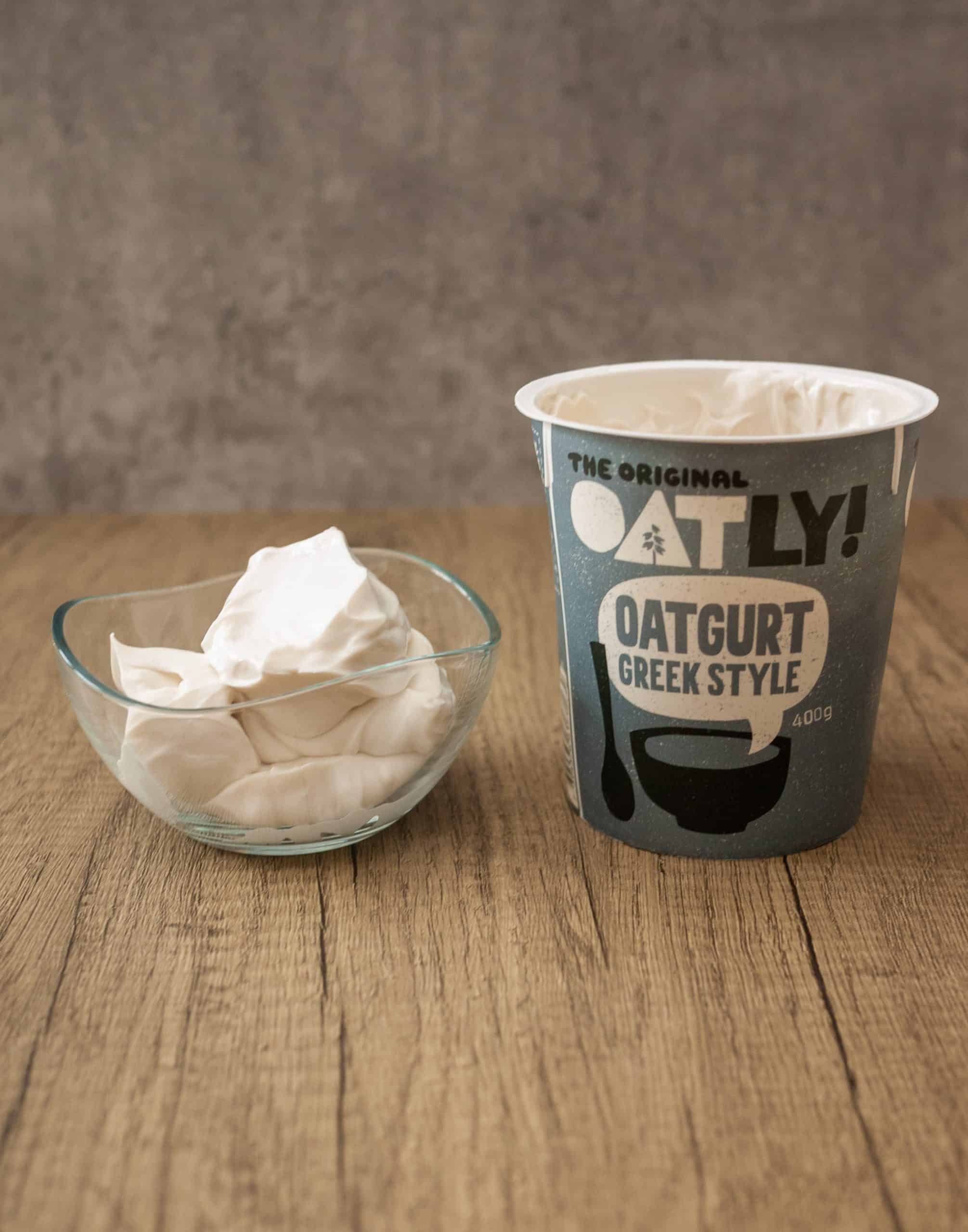 Without a doubt, the Oatly Oatgurt Greek style dairy free yogurt is the best for making your vegan Tzatziki. I was admittedly surprised when I tasted it for the first time. It tasted exactly the same as a strained Greek Yoghurt. So much so that I decided to do a blind test between it and my regular, usual strained Greek Yogurt. I could not distinguish the two!

Its consistency is thick and creamy, just as you would expect from a Greek yogurt. Its color is a beautiful slightly off-white shade.

When tasting the Oatly Oatgurt Greek Style yogurt, you initially get that sharp tangy flavor, together with a velvety, smooth taste in the mouth. Thankfully, it also did not leave any artificial aftertaste. This is a beautiful vegan Greek Yoghurt, ideally suited for savoury dips, like our dairy-free, vegan tzatziki!

How did the remaining vegan yogurts in my round up taste like? Read on to find out! 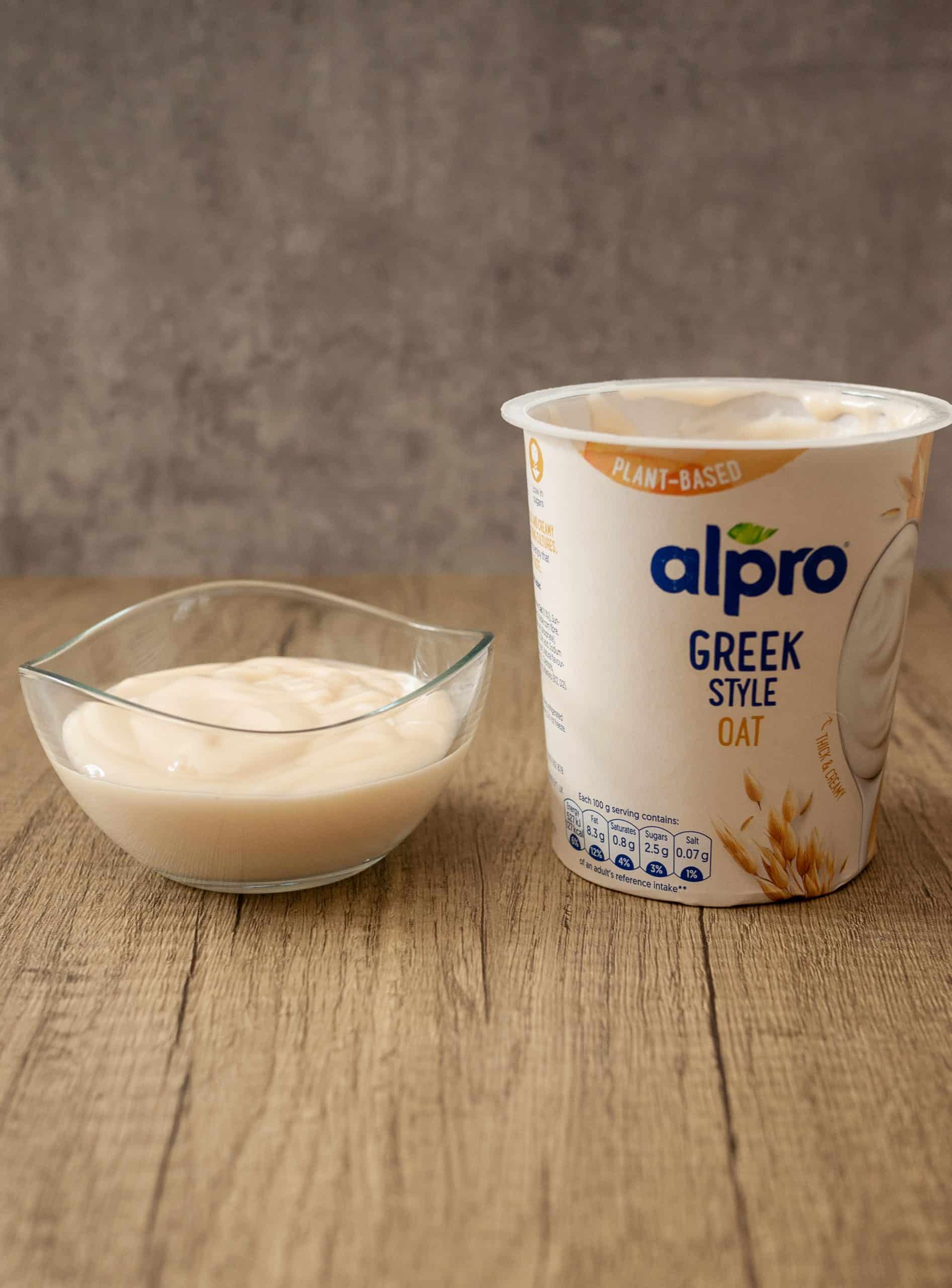 I had high hopes for this one. After all, it is also an oat based yogurt, just like my favorite, the Oatly. However, when I opened it I was surprised by its color and texture.

The Alpro Greek Style Oat yogurt was a lot more jelly like, feeling almost like a creme brûlée in texture. Its color was also slightly more off-white than the Oatly.

When tasting it, it was obvious that this yogurt is much sweeter than the Oatly and the traditional Greek yogurt. The tangy, sharp “bite” I was expecting was not there. You definitely don’t want to be making a savoury dip with this one!

Thankfully, it also did not leave an artificial aftertaste but rather one that had a hint of oats. All in all, it tasted like a delicious desert and it would go great with some chopped up fruit or biscuits, like my delicious quick and easy Greek yogurt desert! 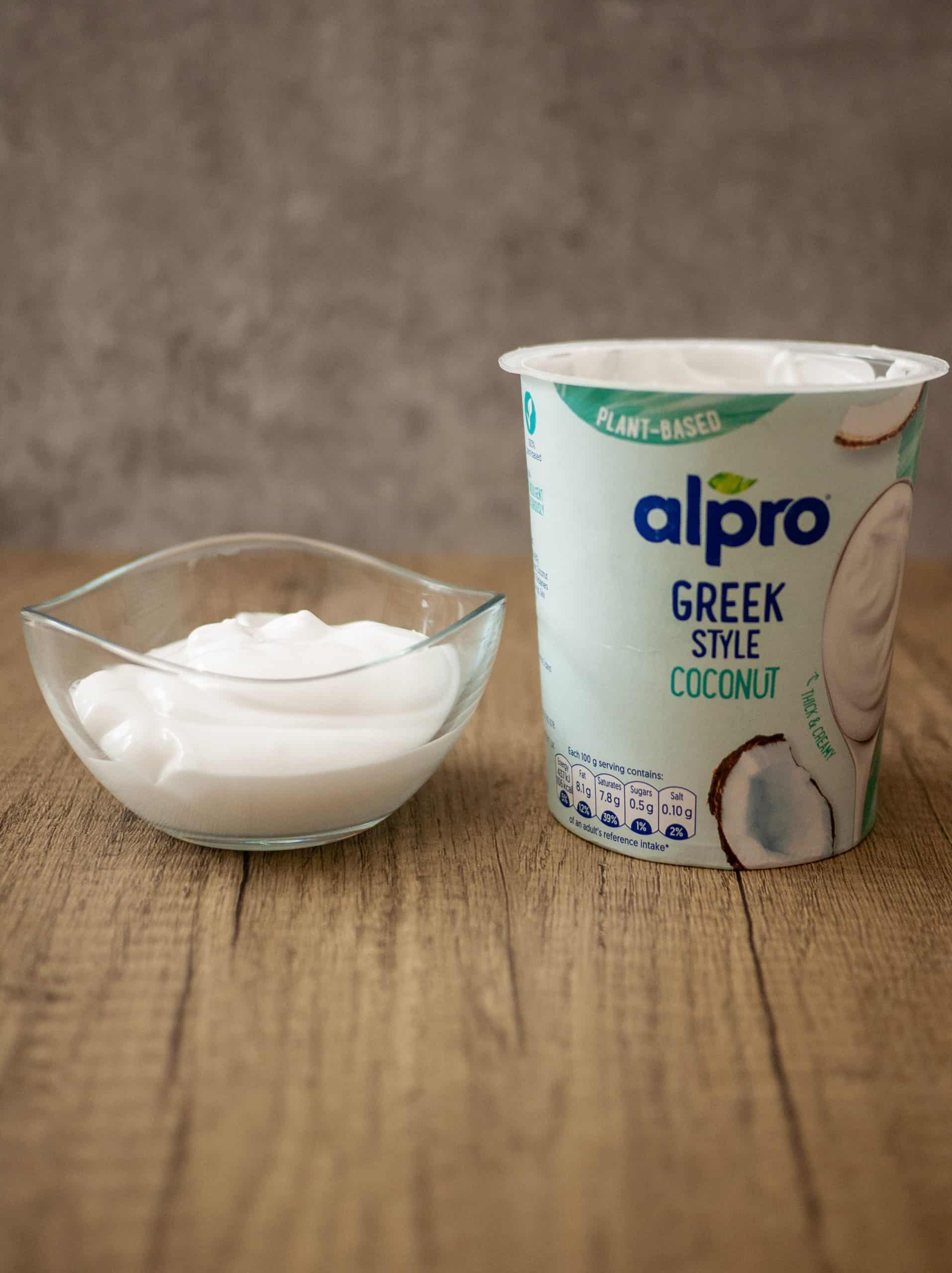 With the Alpro Greek Style Coconut vegan yogurt being coconut based I expected it to be sweet and, of course, taste like coconut milk!

And indeed that is exactly how it tasted! It was fairly sweet, velvety in texture with a hint of sharpness and tanginess. Its consistency was thick and very, very creamy. As expected, it left a slight coconut aftertaste, like the you’ve drunk coconut milk.

What really impressed me with the Alpro Greek Style coconut yogurt was its color. It was bright white, much whiter than all the rest, including the original Greek Yogurt!

Finally, while I loved its taste, it would not be suitable for a savoury dip, like my vegan tzatziki sauce. However, its deliciously creamy texture and sweetness would work amazingly well with some chopped up fruit as a light dessert! 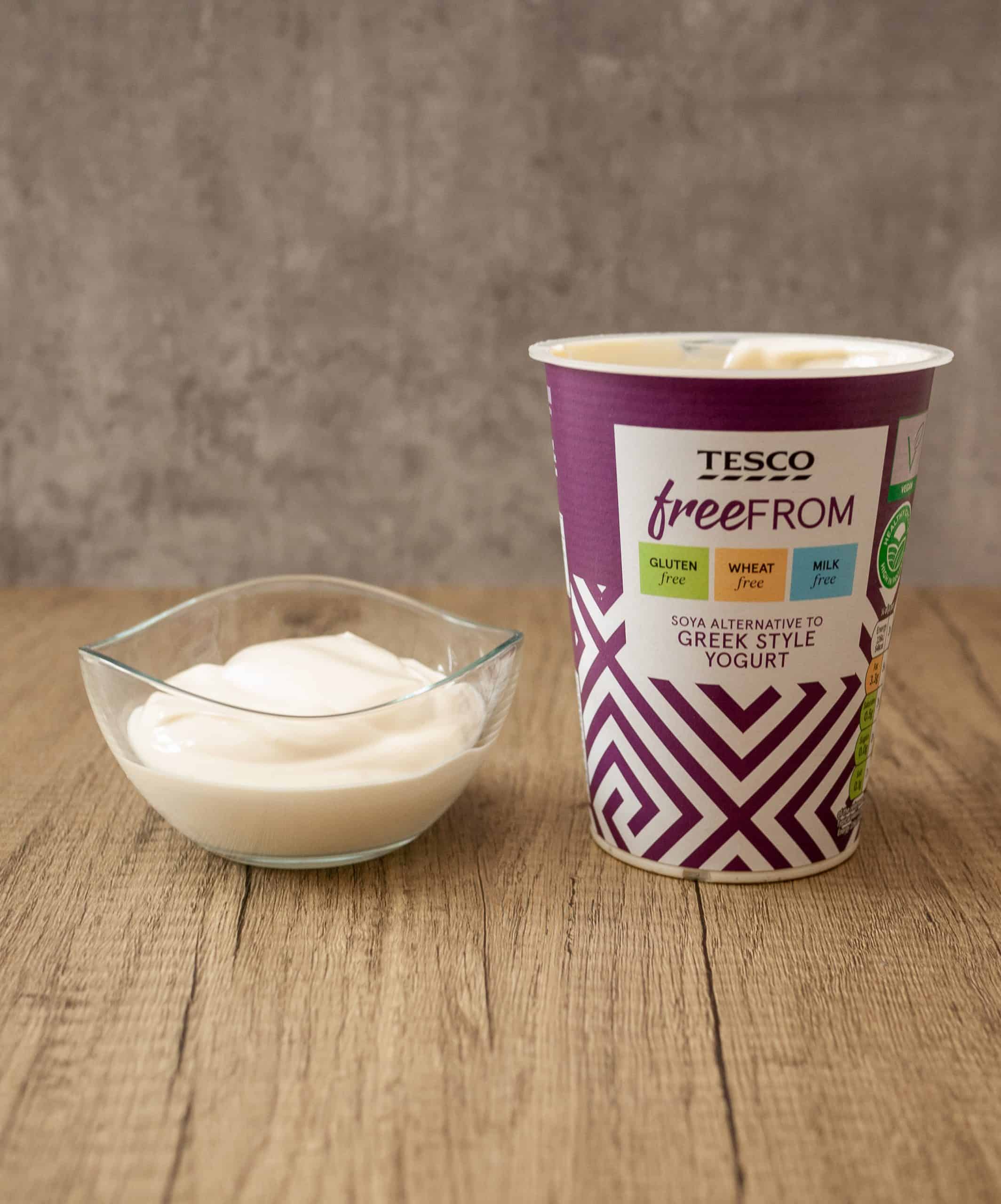 I must admit, I was disappointed when tasting Tesco’s Free From Soy vegan yogurt. Being soy based, I was expecting a neutral flavor that could be a good alternative to the Oatly and similar to the original Greek yogurt.

However, I was disappointed. Firstly, its consistency was very watery and not creamy at all. Texture wise, from the ones I’ve tested, it resembled the original strained Greek yogurt the least.

Looking at the nutritional label, that shouldn’t come as a surprise. It has the least amount of fat among all of the vegan yogurts I tested.

Secondly, its taste had a strong hint of soy coming through with a very little sharpness and tanginess. While it had no hint of sweetness, it also left a weird aftertaste that felt very artificial.

Unfortunately this yogurt would not be suitable for a vegan tzatziki. Also due to its odd aftertaste I could not imagine myself using it for a fruit or biscuit based dessert either. 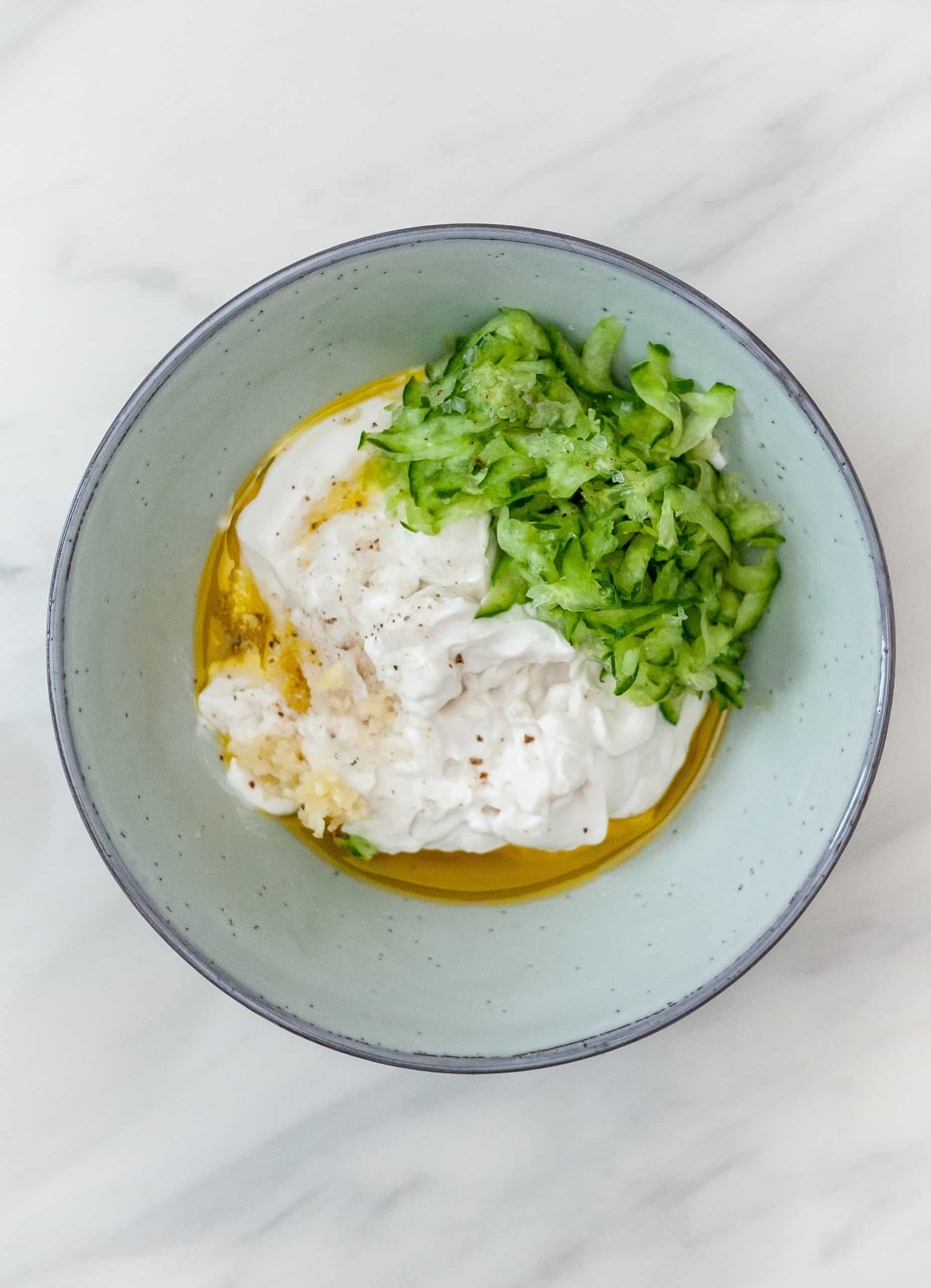 How to make a vegan, dairy-free, Tzatziki sauce

Making your vegan tzatziki sauce is super simple. Start by pouring the yoghurt in a large bowl. Then, grate your cucumber using a box grater. You don’t need to peel the cucumber – just cut it in half and grate it!

Tip: The cucumber is quite watery. After you’ve grated it you’ll need to squeeze it with your hands over your sink to remove any excess moisture. When it’s dry, place it in your bowl.

Now let’s peel and press the garlic. Grab a couple of garlic cloves, gently press down on them using your hands and peel them. Then, use your garlic press to squeeze them on your bowl.

Finally, add your olive oil, vinegar, a pinch of salt and some freshly ground pepper and mix it all together. Give your vegan tzatziki a taste and add some more salt if it tastes bland.

If you’d like your dairy-free tzatziki sauce a bit more creamy, add a little bit more olive oil and mix. This is also the time to add any chopped up herbs, if you’re using them. Finally top it off with some olives and chopped up cucumber for some extra crunch!

To store your vegan tzatziki, wrap your bowl with some cling film (plastic wrap) and pop it in the fridge. It will keep for approximately 4 days. When you want to use it, take it out of the fridge, mix it so any liquids that may have come out are incorporated and serve.

What to serve your Vegan Tzatziki sauce with?

This vegan yogurt sauce is super versatile and goes well with pretty much any savoury dish you can imagine!

I love serving it with some sliced up cucumber and carrots as a simple dip to start our dinner as well as as part of a vegan meze platter and as a side to some delicious Greek vegan dishes.

Below are my top recommendations and serving suggestions!

As part of a Vegan Meze Platter:

As a side dish to a vegan dish:

This is my ultimate Vegan Tzatziki recipe! Deliciously creamy, refreshing and, best of all, even though its dairy-free, it tastes just like the original!