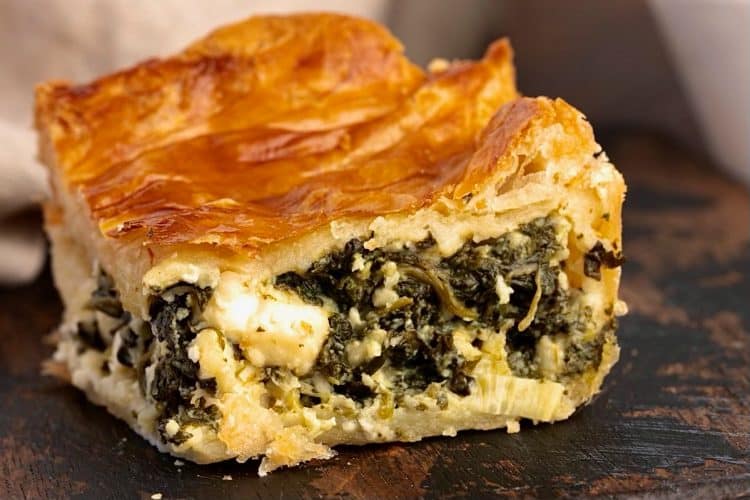 Spanakopita (Greek spinach pie) is one of those delicious Greek dishes that you might think is a bit complicated to make. But the good news? It isn’t that hard to make at all! You can easily learn to make this super tasty Greek spanakopita with puff pastry and enjoy it with the whole family!

What is Spanakopita (Greek spinach pie)?

Sometimes you see the spanakopita made into small pies (spanakopitakia) as well as in larger casserole dishes like this one. In Northern Greece, it is known as spanakotiropita (spinach feta pie) while the term spanakopita tends to be used in Southern Greece but both are referring to a tasty spinach and cheese pie.

Tip: During religious fasts, a version of the recipe is often made without using cheese and eggs. 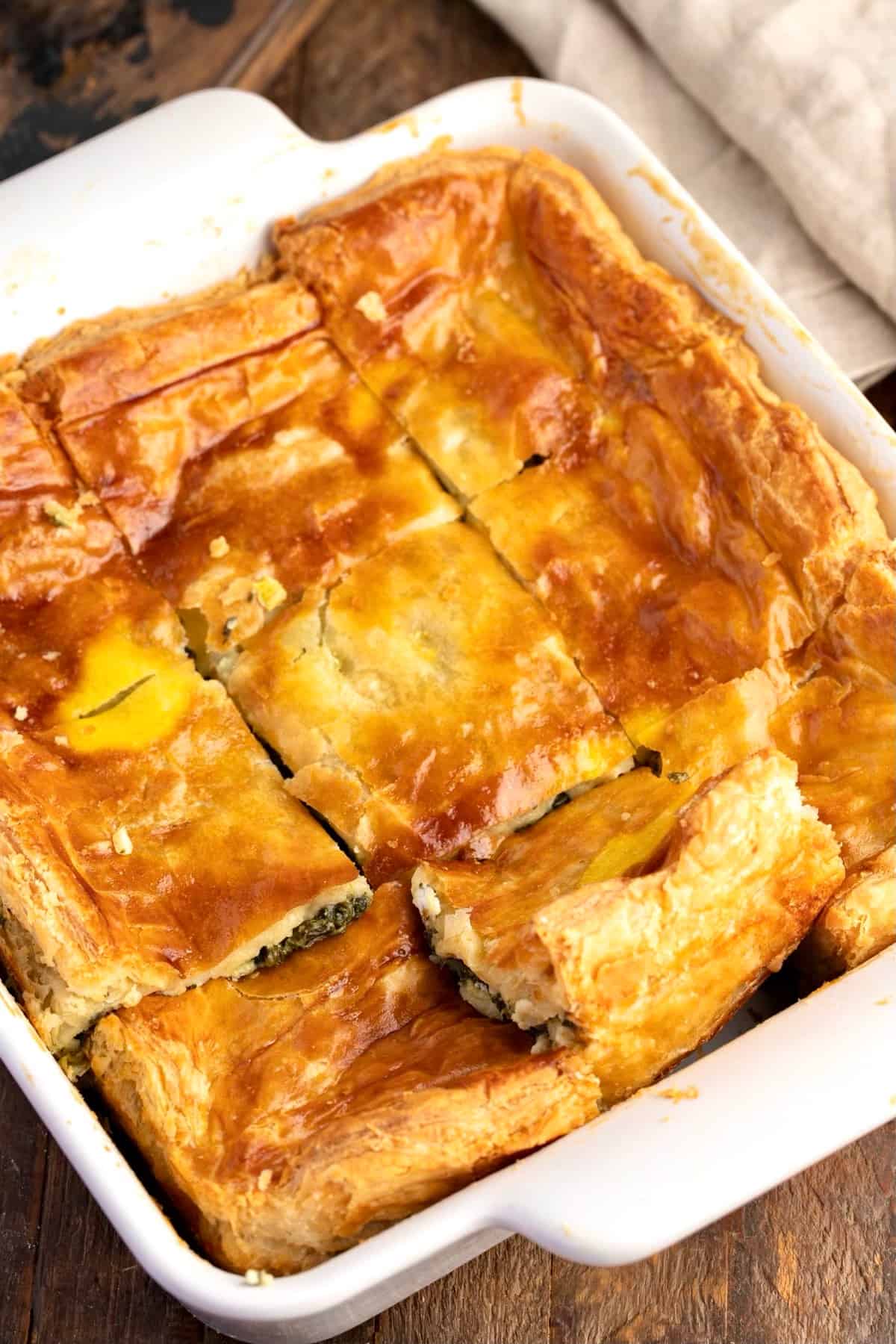 What you’ll need to make Spanakopita with Puff Pastry

You will want good quality feta cheese for this recipe to bring out the best of the flavors. Don’t be tempted to go for something lesser quality or even try a different cheese as it won’t produce the same results as feta does.

Filling: For the spanakopita pie filling, you need leeks, garlic cloves, fresh spinach and then some spring onions, mint, lemon zest and nutmeg. Feta cheese is added for the classic Greek flavor.

Pastry: You’ll need eggs, puff pastry and some flour for rolling to prepare the pastry for the dish. 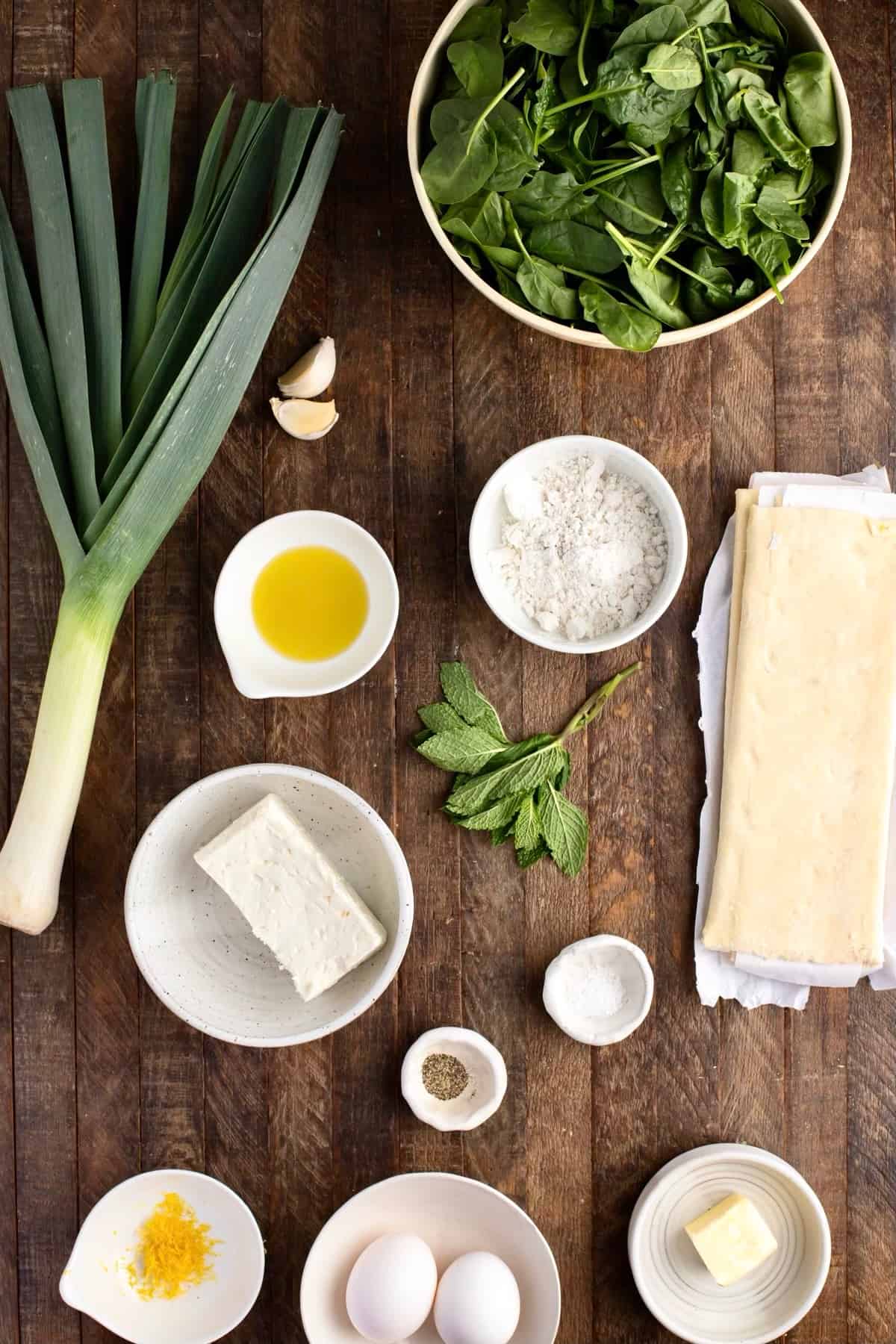 There are three main steps involved with making spanakopita with puff pastry:

Heat some olive oil in a large frying pan or skillet over medium heat. Trim the leeks into 1cm or ⅓ inch pieces then fry in the pan with some salt until soft and starting to color, usually around 10 minutes. 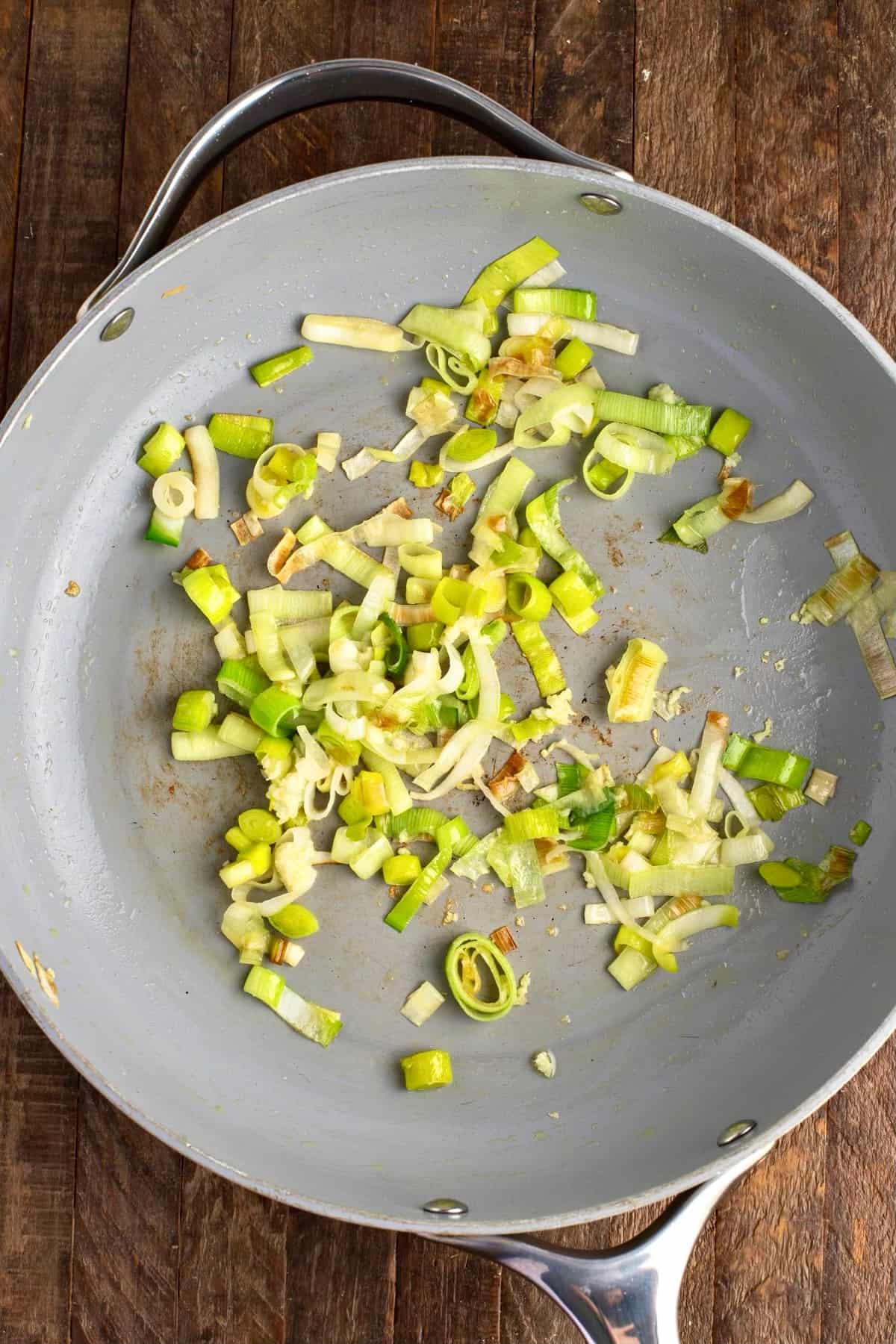 Peel and crush the garlic clove then add to the pan, cooking for another minute until soft.

Chop the spinach roughly and add to the pan, a handful at a time. Stir it frequently and let it wilt then add more. Cook the spinach until almost all of the liquid has evaporated from it, around 15-20 minutes then remove from the heat. 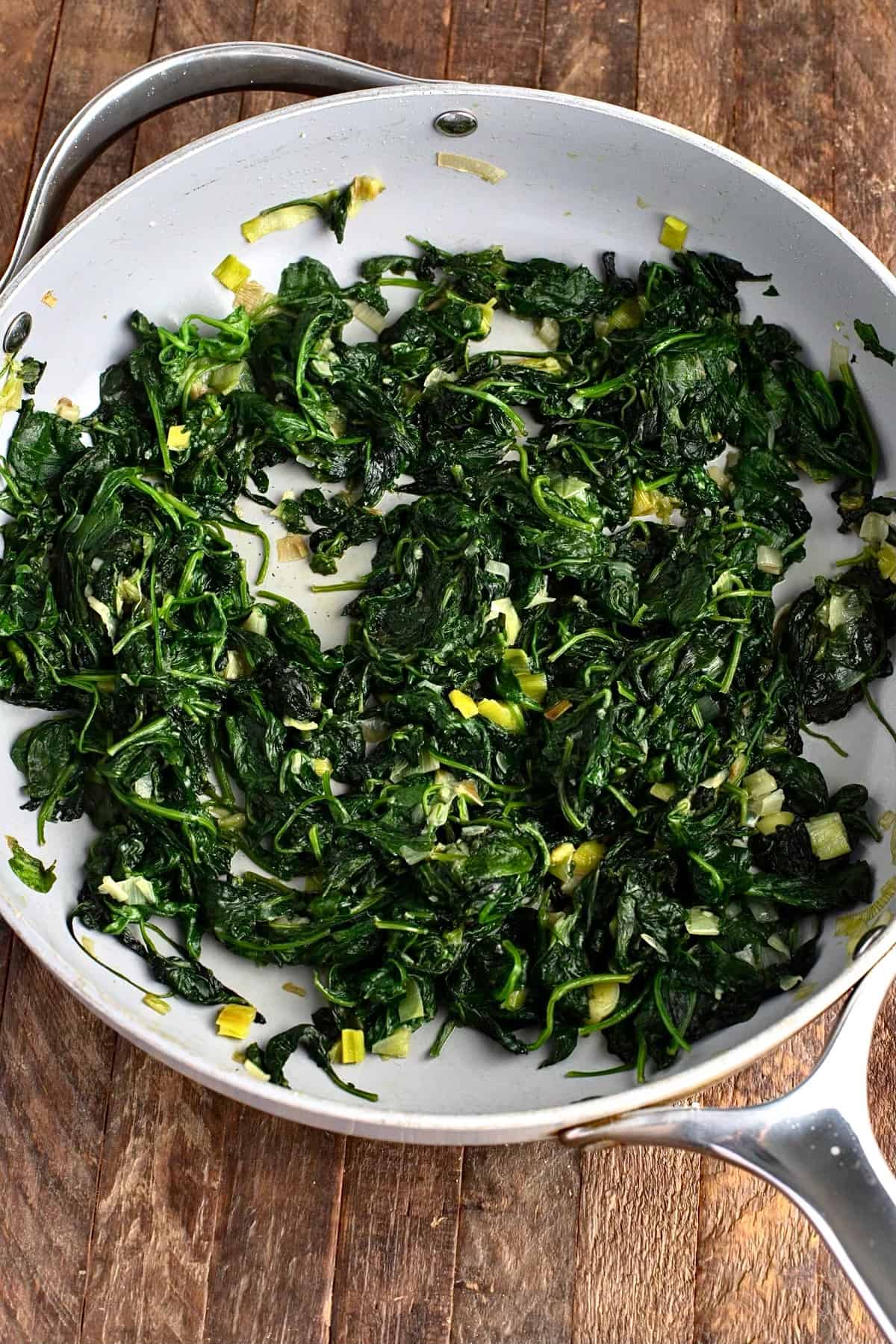 Prepare the spring onions and add them to the mixture with roughly chopped fresh mint, lemon zest and nutmeg. Crumble in the feta cheese, season with salt and black pepper then leave to cool. 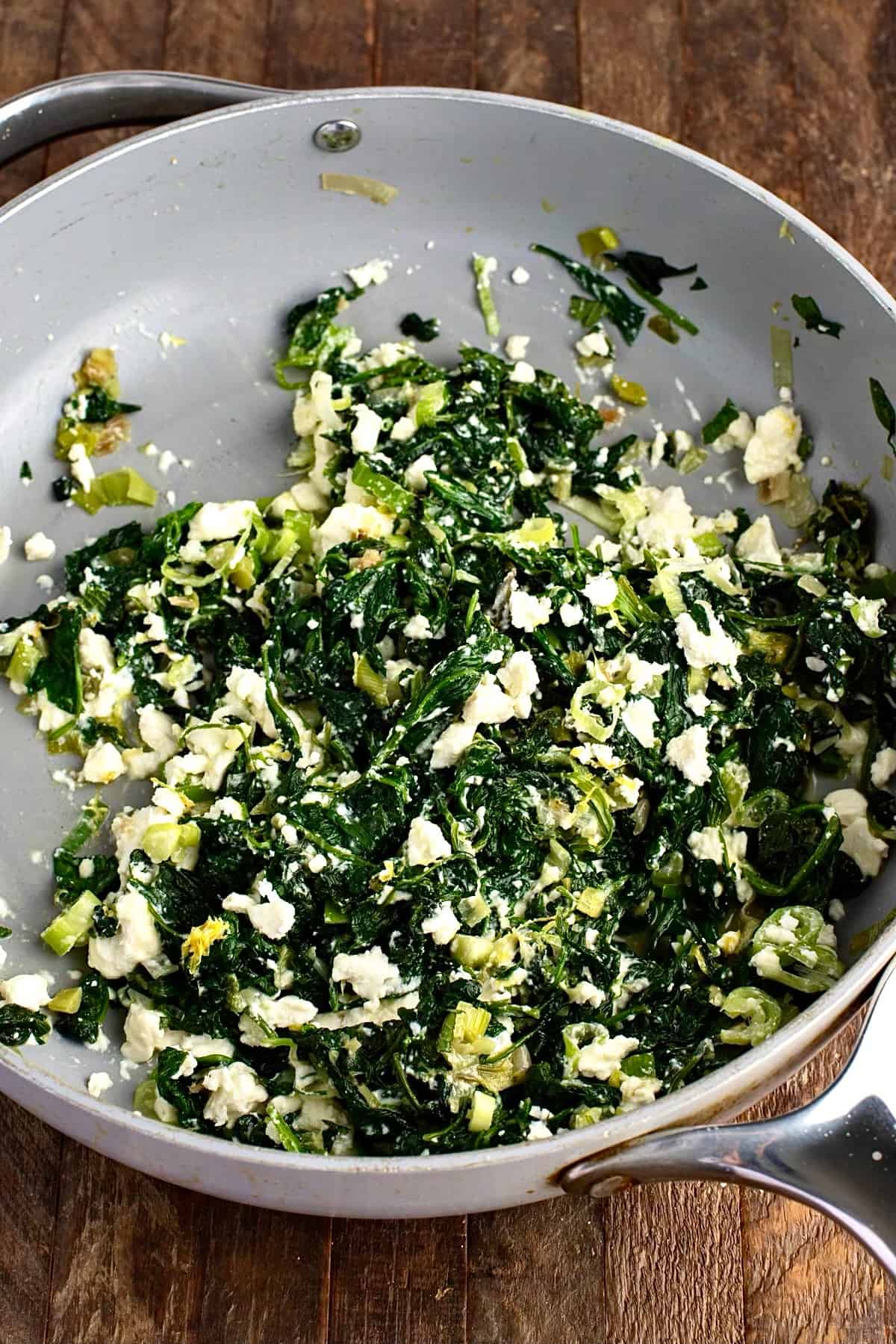 Preheat the oven to 200 degrees (390 F). Lightly flour a surface or board and divide the pastry block into two.

Generously grease a 20 x 20cm baking tray that can hold at least 4 inches of filling with butter then roll out one piece of pastry making sure it can line the dish. Press into the corners with your fingertips for complete coverage.

Beat an egg and stir into the spinach mixture before spreading it across the pastry, pushing into corners and using a spoon to have a smooth surface. 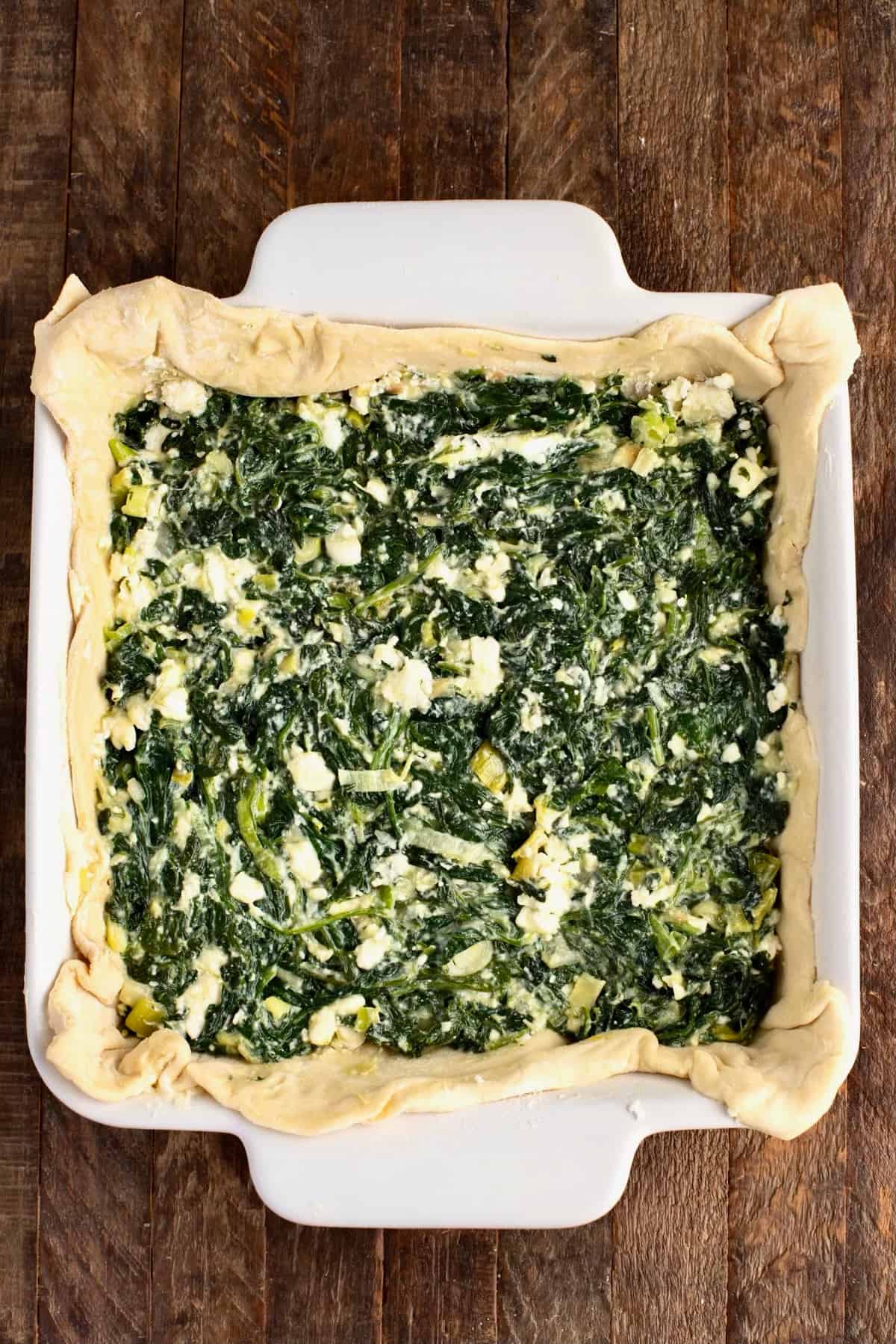 Beat the other egg and brush it across any exposed pastry above the filling.

Roll out the second sheet and add it to the top, using fingers to pinch the two sheets together. Trim off any excess and brush with the rest of the egg. 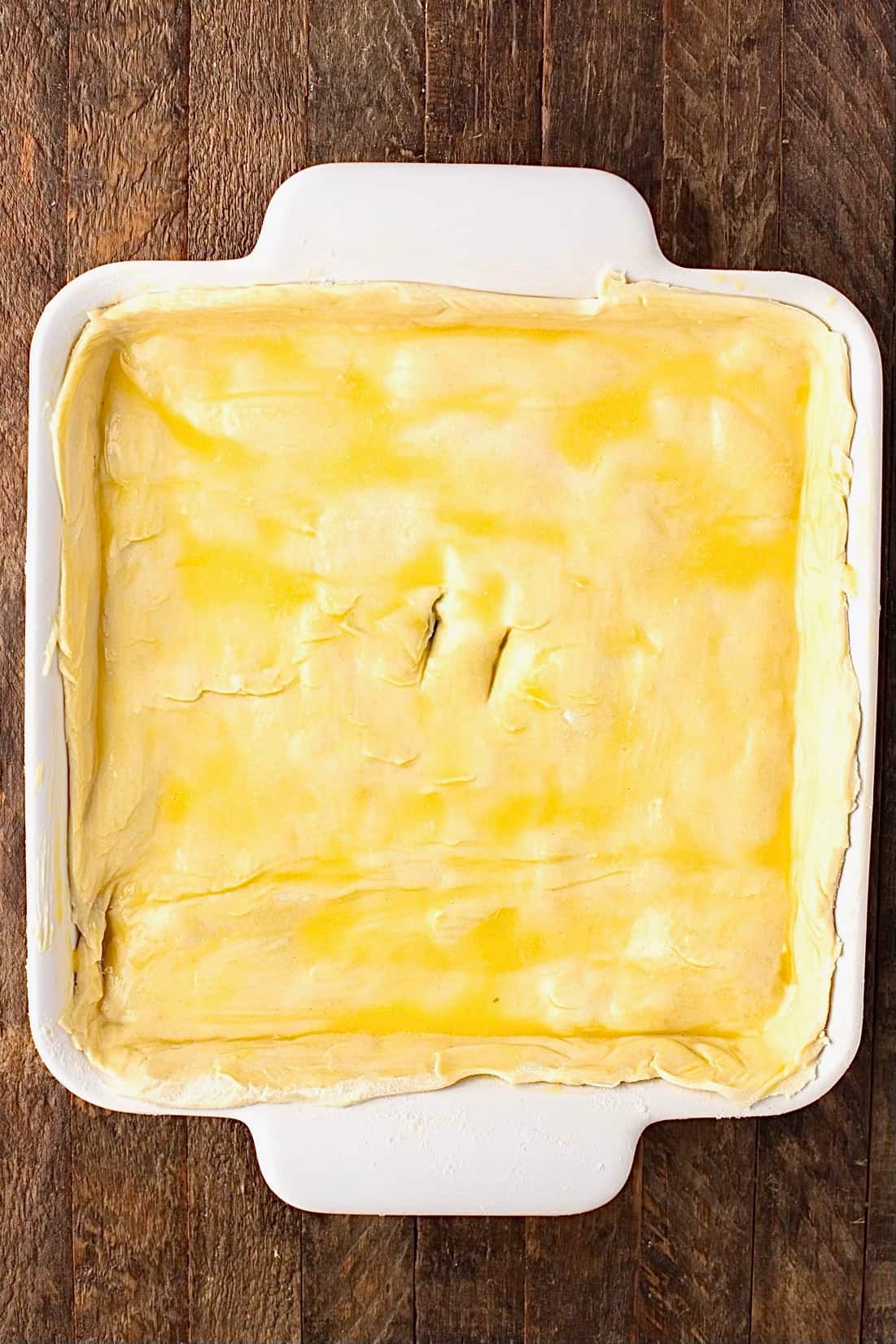 Cook for 30 minutes until the pastry is crisp and golden. Remove from the oven and leave for another 30 minutes before slicing and serving. Warm or room temperature is perfect for this recipe.

Can you Use Frozen Spinach?

I prefer to use fresh spinach when making this Spanakopita with puff pastry recipe but you can use frozen spinach too.

Spinach is a great leafy green to keep in your freezer for when you need it. It can work for this recipe too because you don’t need to cook it in advance, just as part of creating the filling.

Just make sure to fully thaw the spinach and squeeze out all the liquid before adding it to the rest of the filling ingredients. This will help to prevent the spanakopita from becoming too waterlogged. 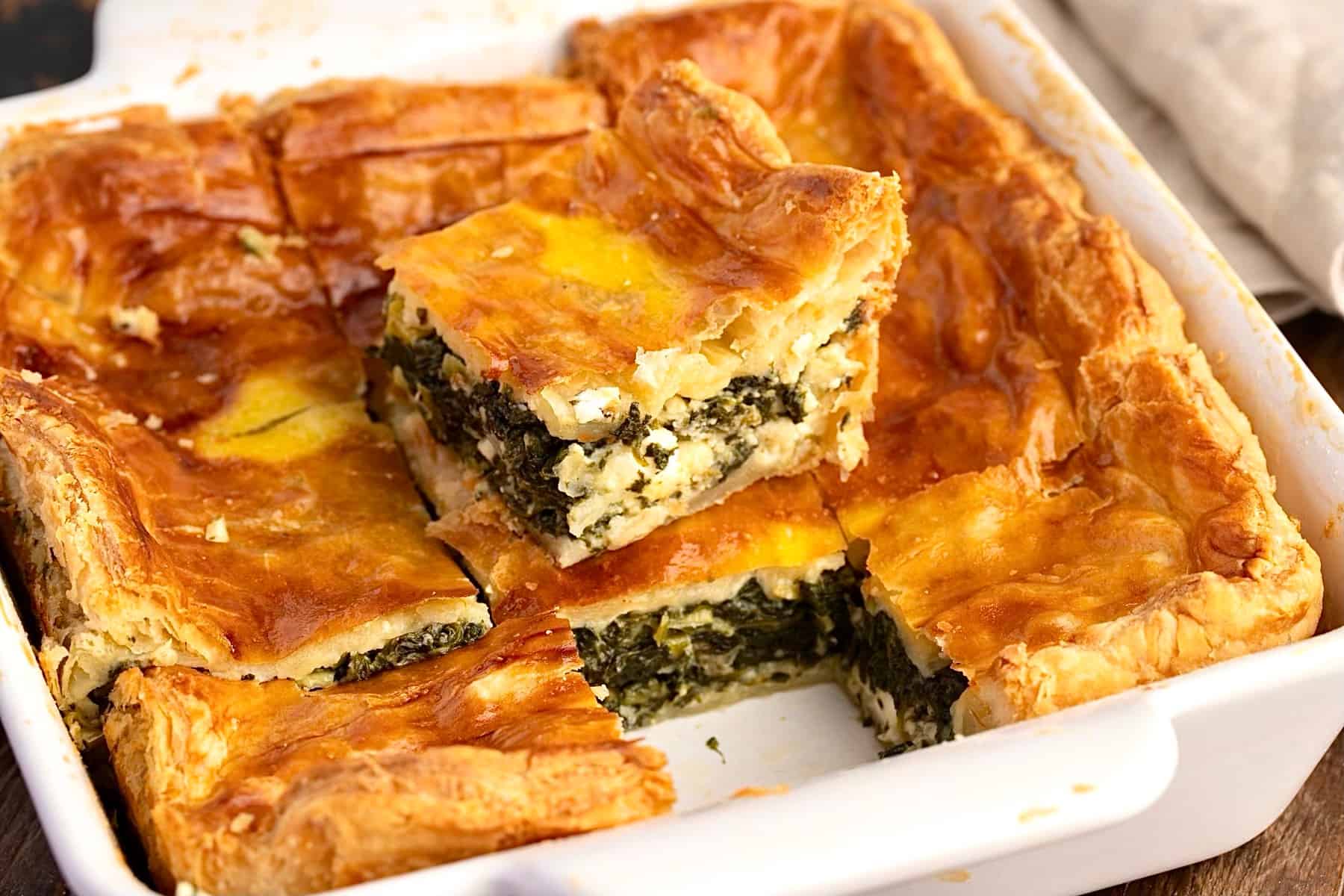 It will also store in the refrigerator for 2-3 days after cooking. You can heat it back up in the oven.

To freeze it, take the cooked recipe and cut it into portions then freeze it like this. Once cooled pop into an airtight container. Defrost overnight then heat up in the oven. 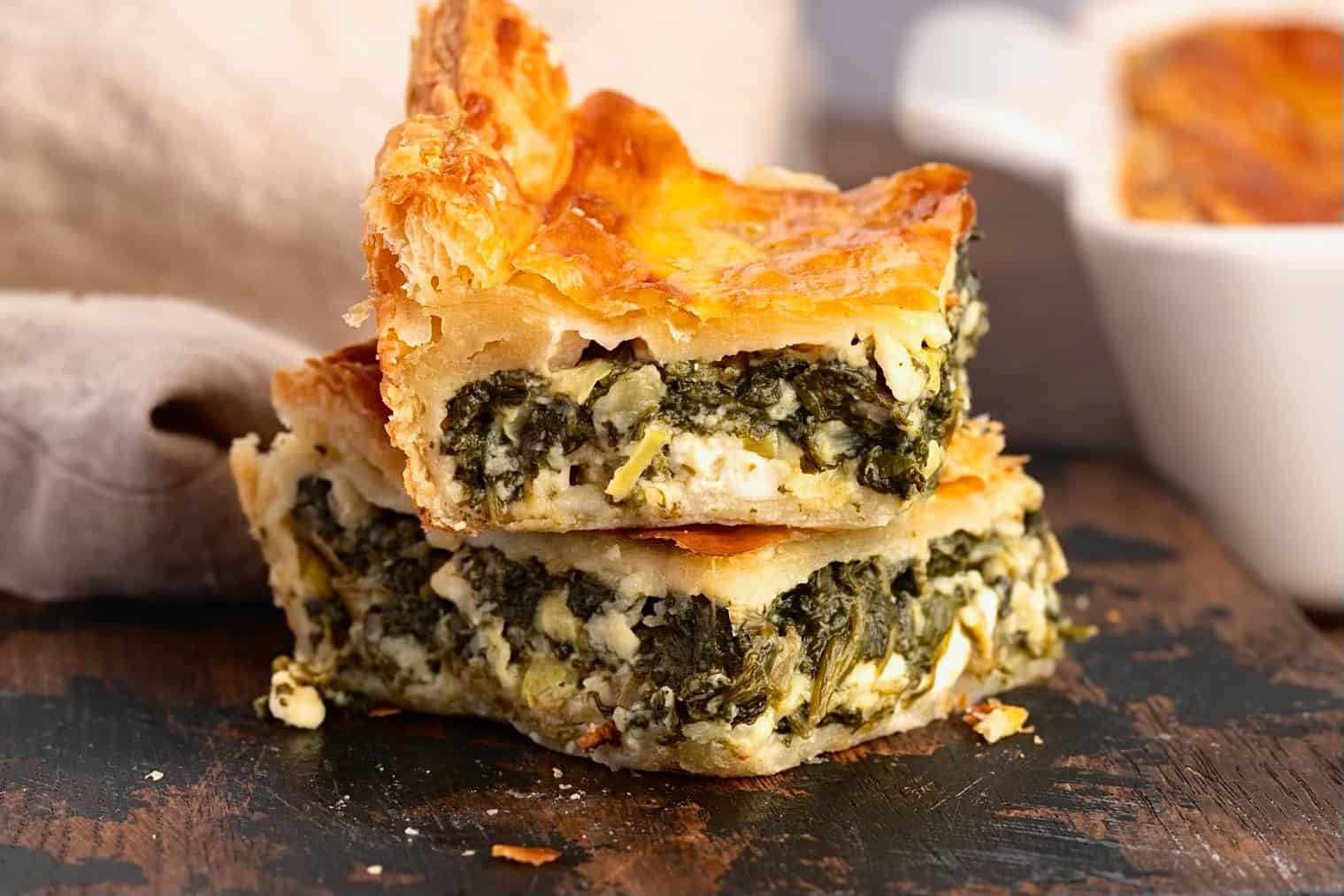 This delicious Spanakopita with puff pastry works well on its own as a standalone dish, but is also great if you have a few people to feed alongside dishes such as Greek lemon chicken or a lamb recipe. You can serve it with Greek salad and some dips such as Tzatziki or garlic hummus. 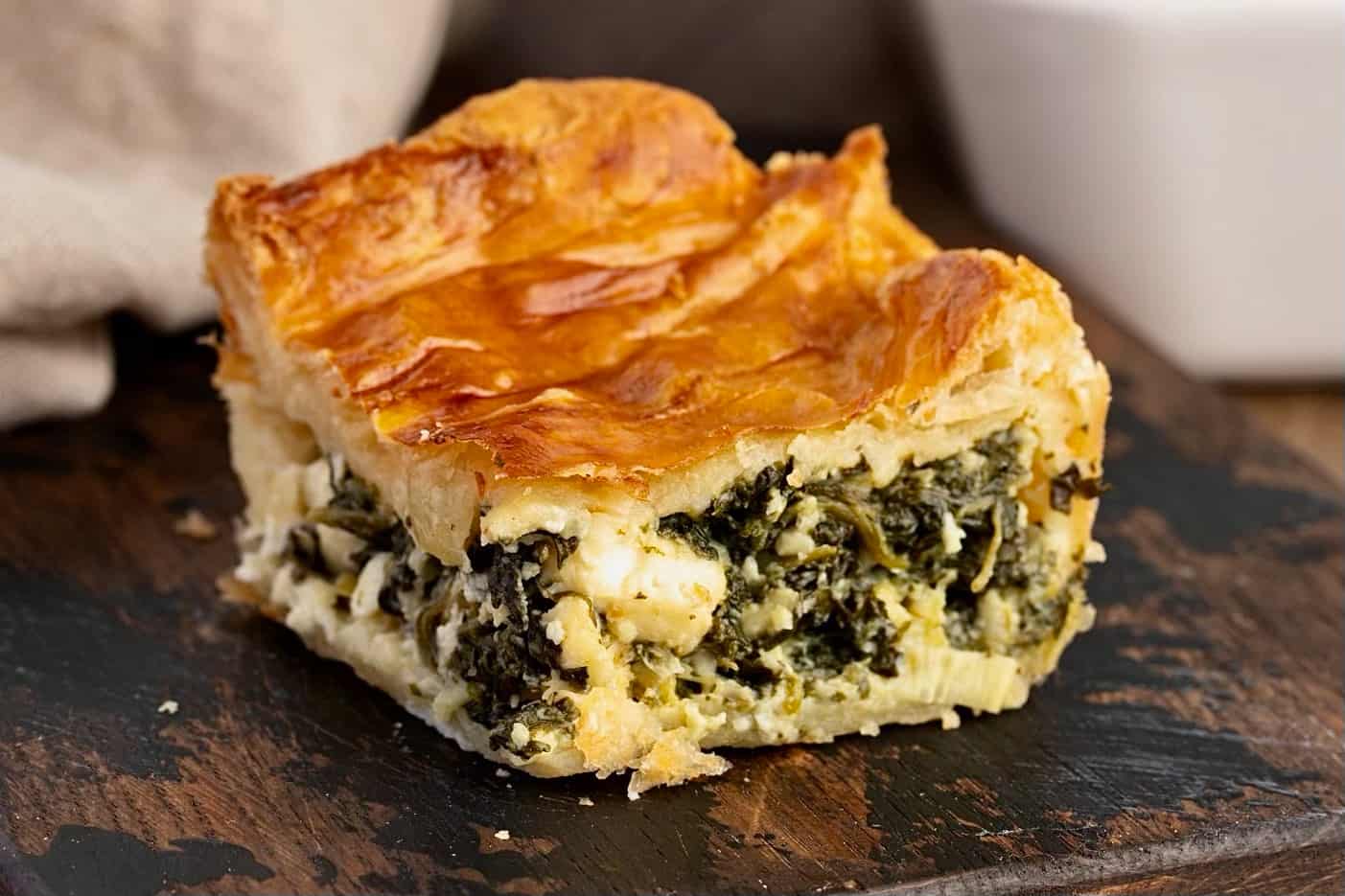