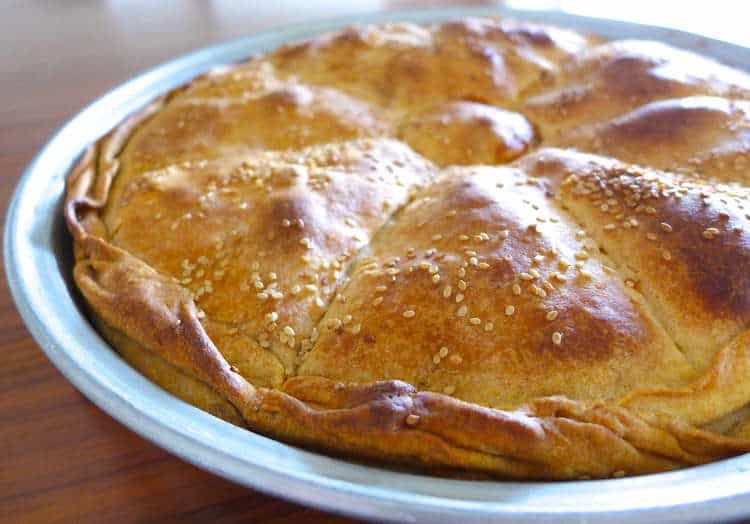 There is nothing better than the smell of a freshly baked homemade pie! Sumptuous savoury pies are a staple in Greek cooking. From the classic Greek spanakopita, chicken pie (kotopita) to cheese pies of various sizes and shapes, savoury pies are suitable for every time of the day, as a main dish, starter or mid-day snack.

This is a traditional Greek recipe for a vegetarian leek pie (prasopita) for you to recreate this delicious traditional delight from scratch.

The main ingredient you will need to make a Greek pie are leeks (prasa), which are a favourite ingredient in all types of Greek recipes and especially when baked with cheese wrapped in phyllo (filo) dough, until nicely softened and sweetened, mingling with the melted cheese.

As ‘village dough’ is a little bit difficult to find, you can either make this traditional Greek leek pie recipe using either commercial phyllo dough, puff pastry or, if you are feeling adventurous enough, make your own homemade phyllo with this easy recipe for homemade phyllo for beginners. Roll each sheet of dough with passion for good food and it will truly reward you with a crispy, flaky and delicious crust on your traditional Greek leek pie!

Try out this delicious traditional Greek leek pie recipe and amaze your friends and family with this crispy and velvety delight. Enjoy!

Discover this traditional Greek leek pie recipe (prasopita) with homemade phyllo for you to recreate this delicious vegetarian delight from scratch!