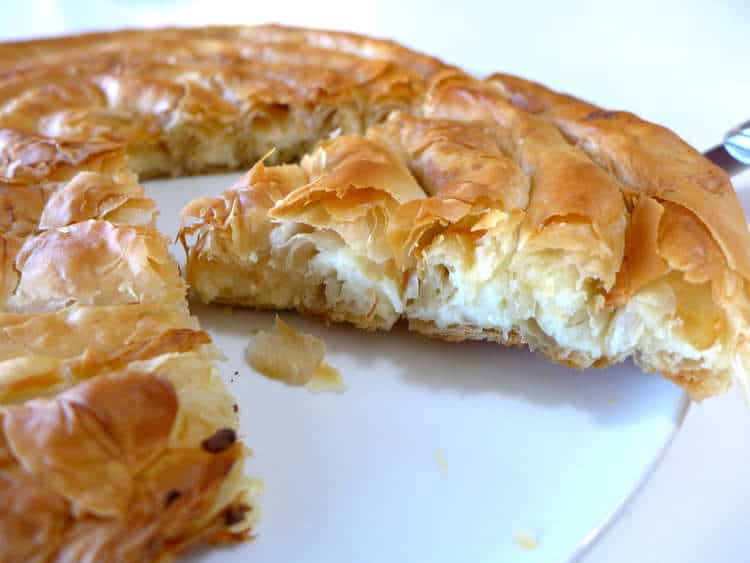 A very unique and impressive vegetarian traditional Greek cheese pie recipe from the region of Kozani! Sumptuous savoury pies are a staple dish of the Greek cuisine; from the classic spanakopita recipe, chicken pie (kotopita), leek pie (prasopita) to cheese pies of various sizes and shapes, savoury pies are suitable for every time of the day, as a main dish, starter or mid-day snack!

The main ingredients are feta cheese, eggs and phyllo dough and is quite different to the taste to the snail-shaped Greek cheese pie from Skopelos, despite the visual similarities (the version from Skopelos is made using home-made phyllo and is fried).

To prepare this snail-shaped Greek cheese pie from Kozani (Kichi) our feta cheese is mixed with hard yellow cheese, spices and seasoning, is wrapped in a soft, fresh phyllo and  baked until golden brown and perfectly melty on the inside.

Tip: A mature feta gives this traditional Greek cheese pie a bold and salty flavour, so be careful with how much salt you add in the seasoning!

Give this delicious traditional Greek cheese pie recipe a try and amaze your friends and family with its crispy and tangy flavor! Got any questions? Feel free to ask in the section below and if you enjoyed our recipe don’t forget to share with your friends and family on your favorite social network using the links above! Enjoy!

Find out how to make the perfect spiral-shaped Greek cheese pie (Kichi Kozanis) with this traditional, locally sourced recipe. It all starts with some good quality phyllo.