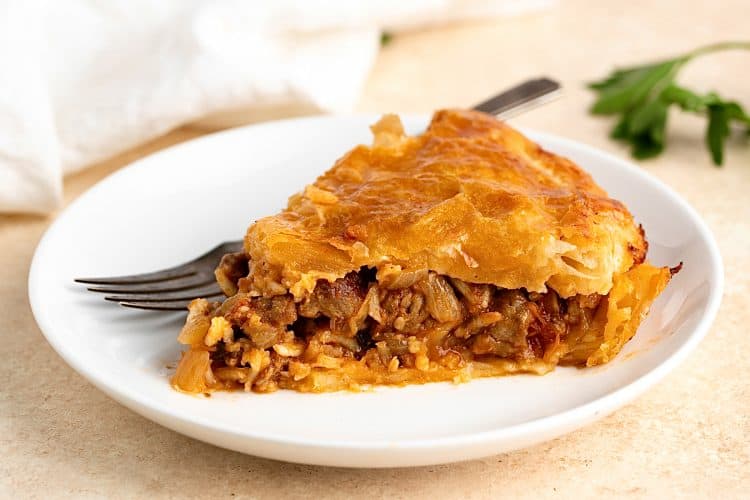 If you are looking for a classic Greek meat pie, then this recipe for Kreatopita will be just what you need! Combining two different types of meat, it is a traditional, rustic pie you would see in villages across parts of Greece.

So go ahead and discover how to make it to perfection with my delicious recipe, step by step photos and tips and tricks below!

What is Kreatopita (Greek meat pie)?

Kreatopita is a traditional Greek meat pie that you’ll traditionally find made in the villages across Kefallonia. They may not look like the fanciest of pies, but they are packed with so much flavour! They are also easy to make and can be a great way to use up some cuts of meat that you have in your freezer. This pie is a: 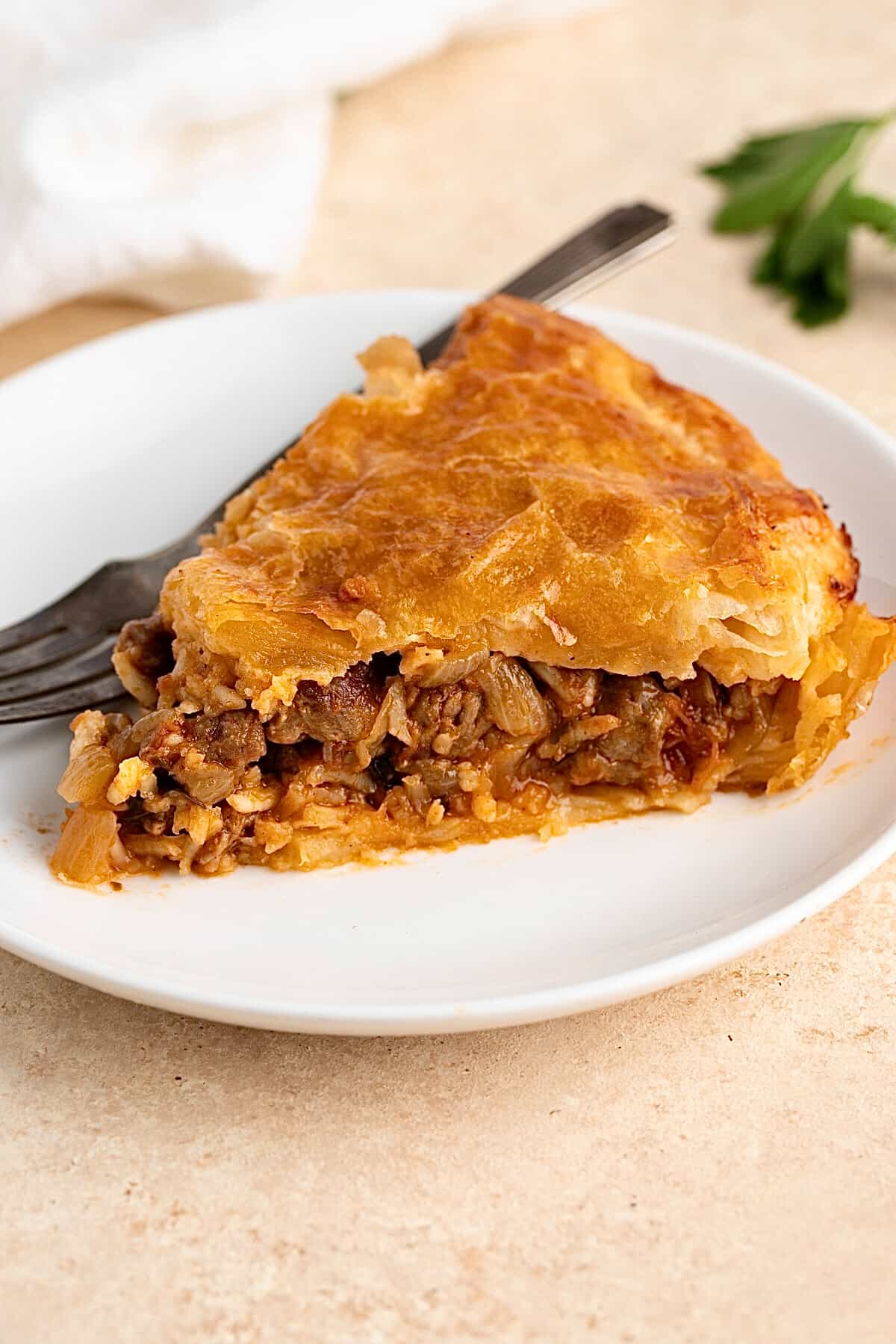 You can use any combination of meats such as lamb, pork, veal or beef in the pie but it is always traditional to use at least two different types. I would avoid pairing veal and beef as these can taste quite similar so you’ll loose out a bit on the flavor!

When selecting your cuts of meat, I find that shoulder works best for both lamb and pork as it contains a bit more fat than the rest, which gives the pie a more intense flavor as well as they are pretty cheap to get!

Finally, traditionally, Carolina rice is used in the pie but this isn’t always widely available outside Greece. So instead go for white basmati rice in the dish as it works just as well! If you do spot Carolina rice, then by all means, give it a try instead. 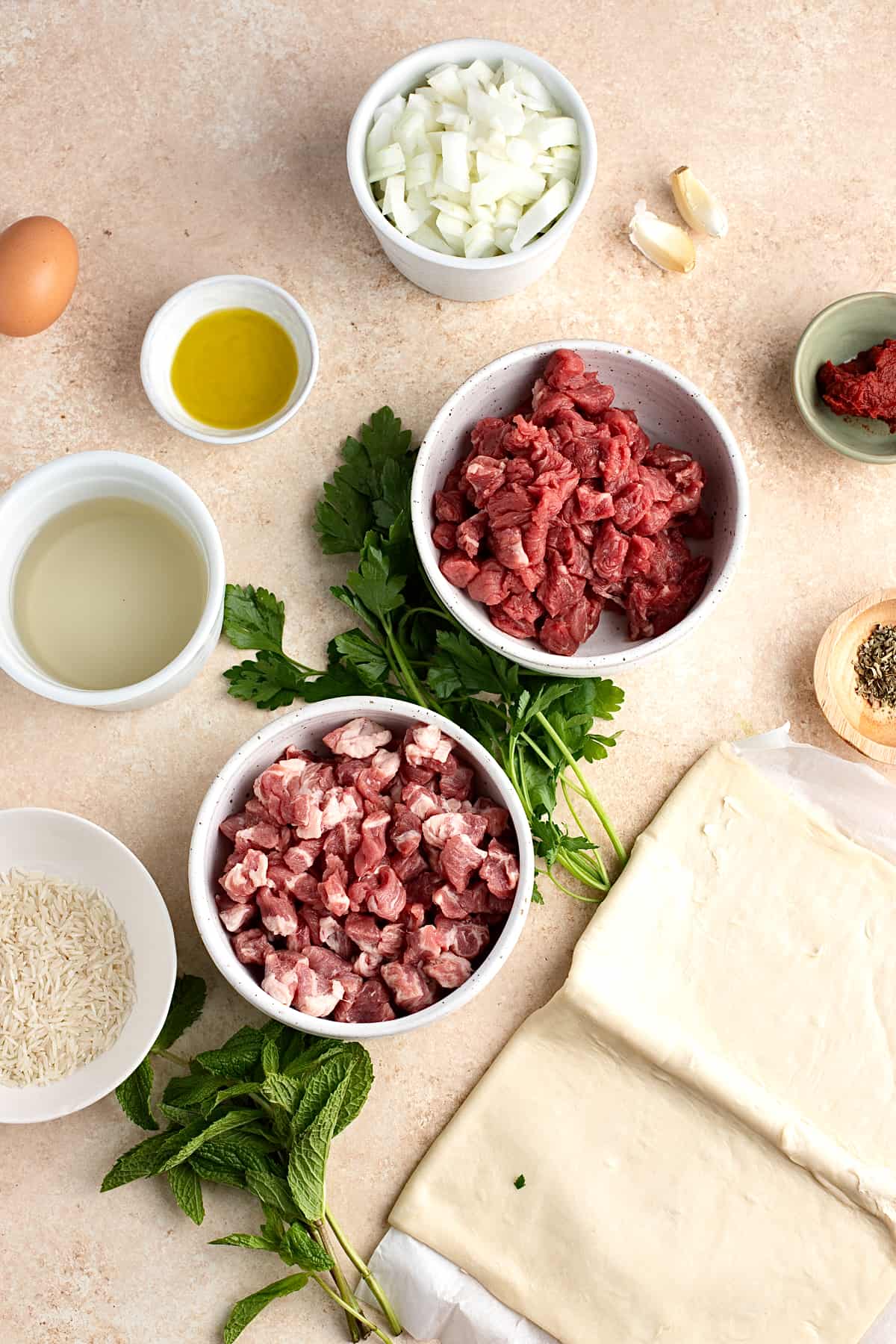 There are three main steps to prepare this Greek meat pie: 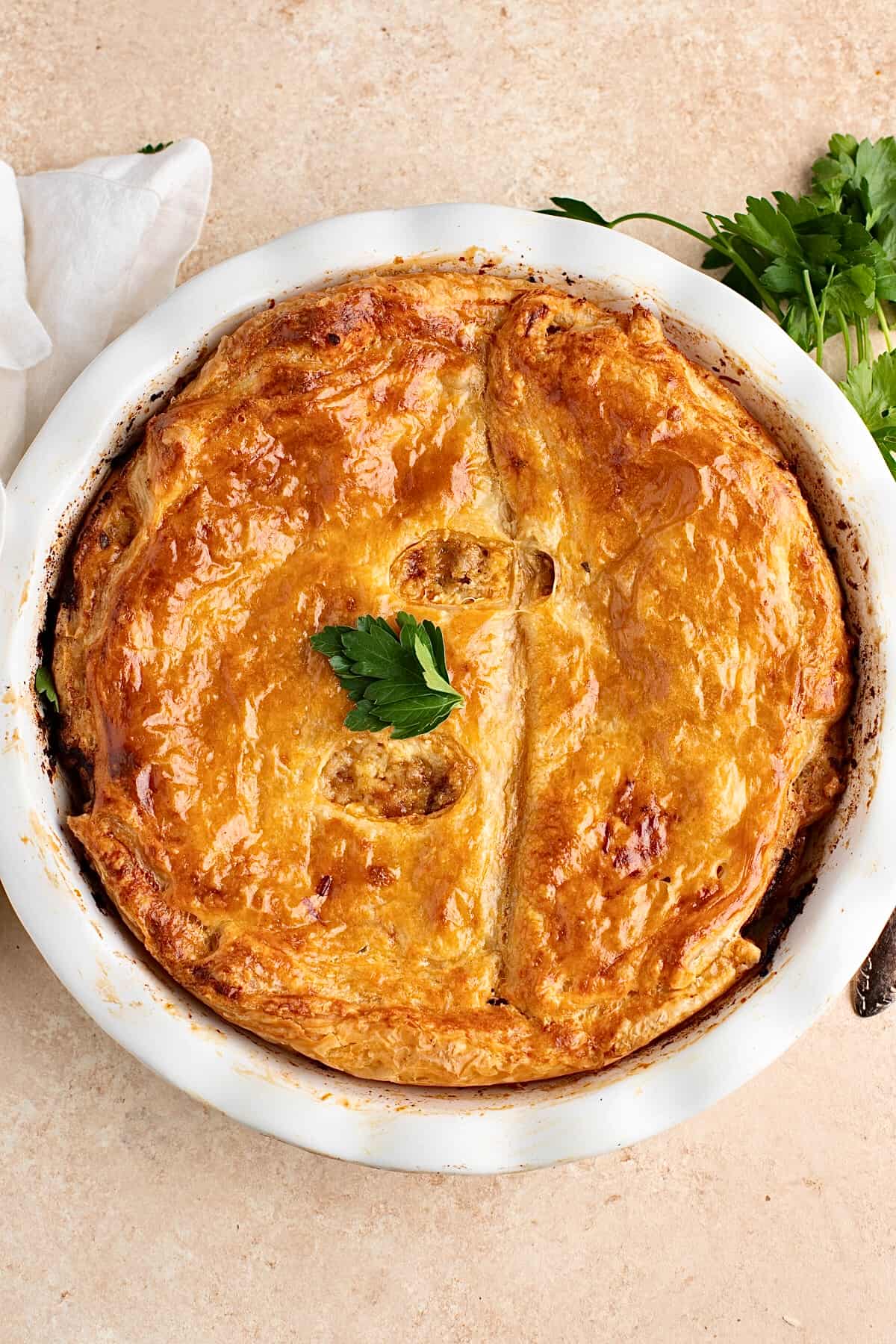 To make the pie filling, heat a large heavy-bottomed, lidded saucepan or casserole over a medium high heat with olive oil.

Brown the meat in batches, lowering the heat as needed to avoid burning bits on the bottom of the pan, and set it aside.

Tip: If your pan is not a non-stick type or not well seasoned you may get some bits of burnt meat on the bottom of the pan. If the brown patches are excessive, move the meat to another pan with a fresh splash of olive oil otherwise they may spoil the flavor of the pie filling as it will taste burnt! 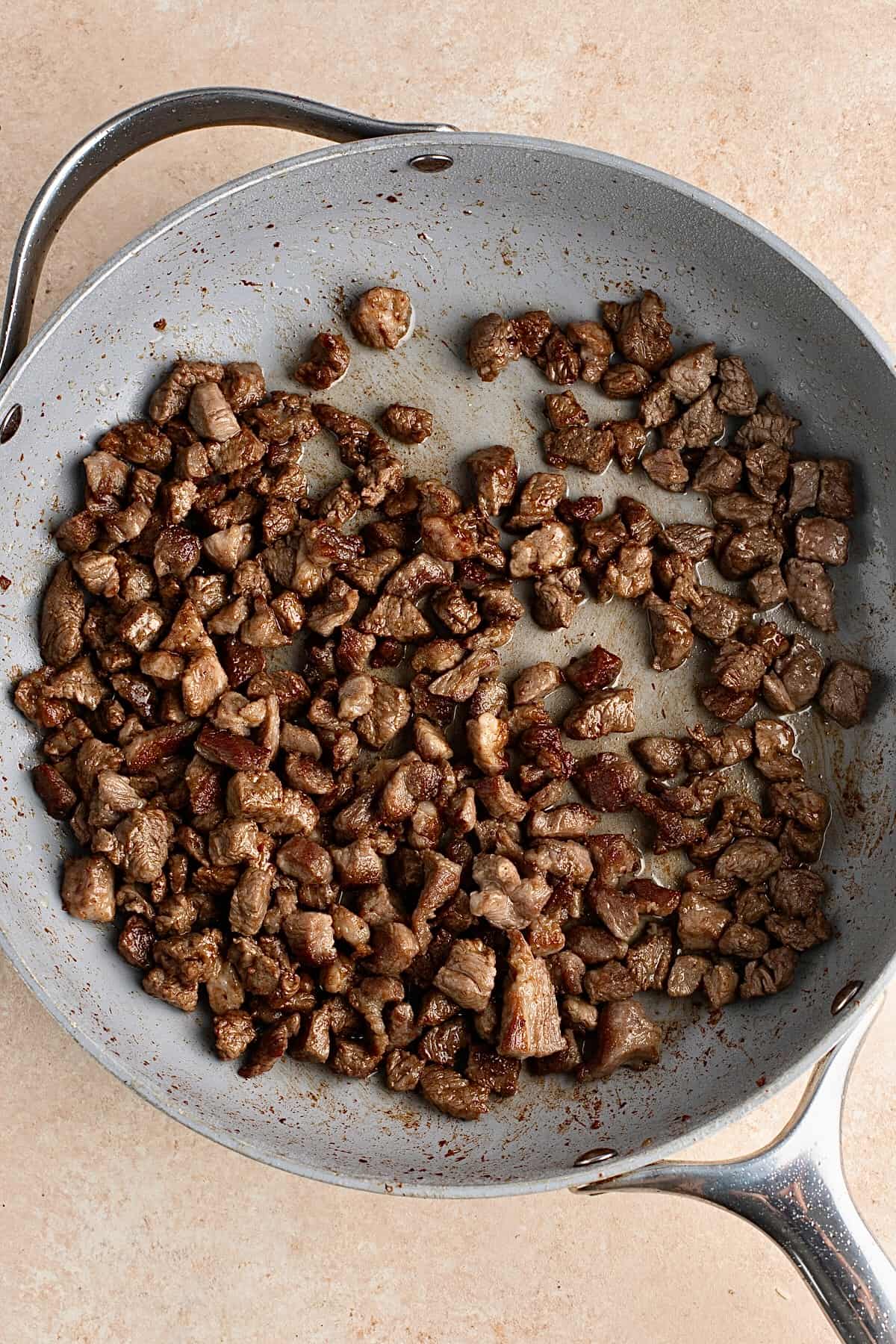 Start by reducing the heat to medium low – you want the sauce to simmer, not boil! Fry the finely chopped onion with a little salt and the fat leftover from the meat until they have softened, caramelised and started to brown. This usually takes about 6-8 minutes. Then peel and crush the garlic and add to the onion, cooking for another minute. 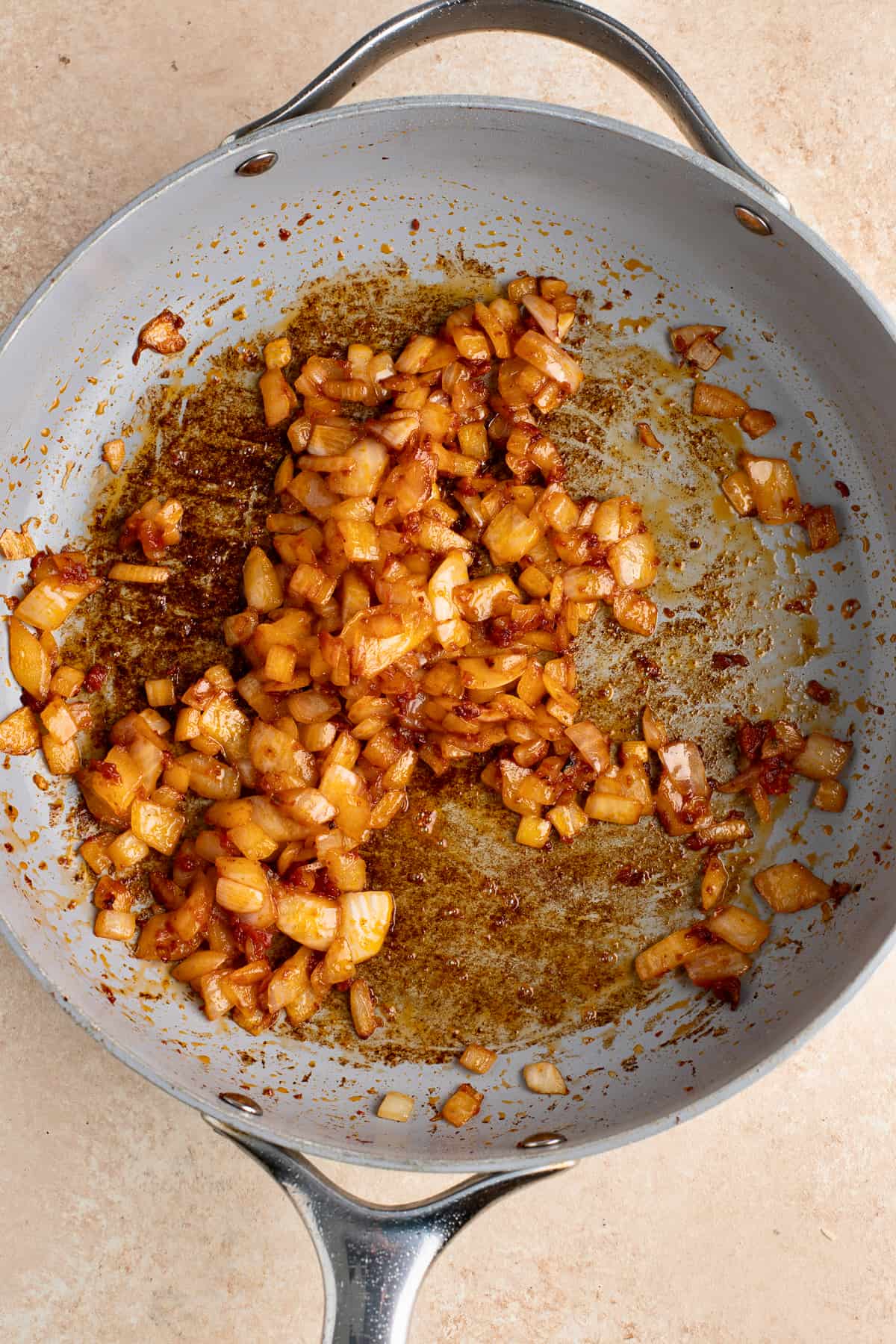 Then proceed to stir in the tomato paste and took for a minute or two to release the tomato flavor. Add the roughly chopped tomatoes and cook again until they start to break down then mix in the dried marjoram (or oregano if you’re substituting).

Add the white wine to deglaze the pan, let it simmer for a bit until it reduces by half then add 200ml or 3/4 cup of water and bring to the boil. Finally reduce the heat to low, add the lid on and simmer for an hour or so until the meat is tender.

Once done cooking, add the roughly chopped fresh herbs (parsley and mint) to the mixture, add the uncooked rice, stir then leave it to cool to room temperature. The rice will cook with the residual heat from the meat sauce and will soak up all its delicious juices! Once you are happy the pie filling is cooled, add more salt and pepper if needed.

Tip: Before adding the rice, if your sauce looks too dry, add a splash of water, bring it to a boil, remove from the heat then add the rice. 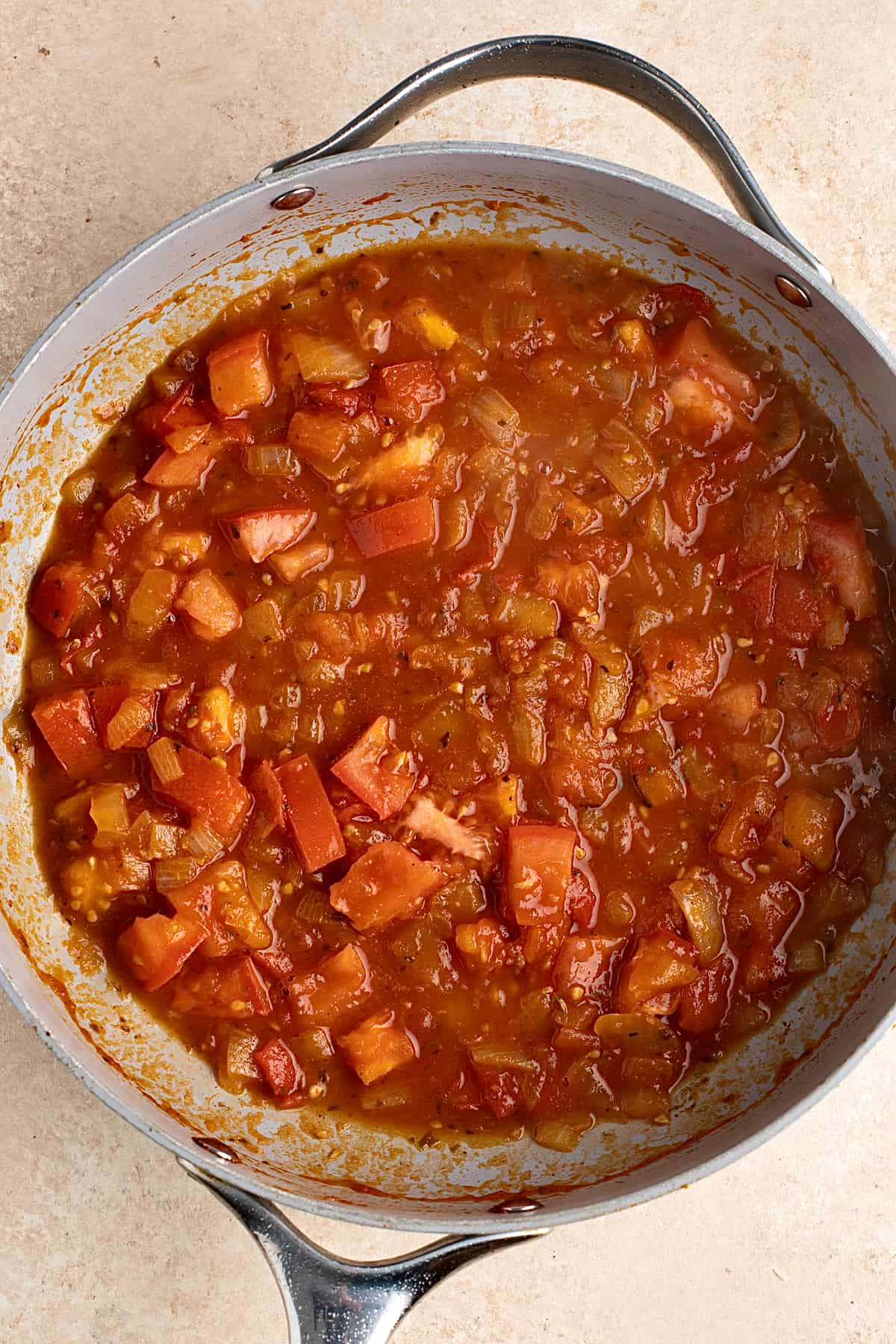 To assemble your kreatopita, preheat the oven to 180 degrees Celsius / 350 Fahrenheit and grease a large square baking dish (about 22 cm/9 inches square) evenly with some butter.

Split the puff pastry into two parts, one slightly larger than the other. The smaller one will make the pie lid while the bigger one is for the pie base.

Flour your surface, then roll out the larger pastry block into a square that comfortably lines the bottom of your dish and leaves a few centimetres or 1/2 an inch over the filling line. Use this to line the dish, pushing gently into the corners with your fingers.

Proceed to spoon in the cooled filling. Lightly beat an egg and use this to brush the exposed edges of the pastry. Sprinkle some of your grated cheese evenly across the pie filling. 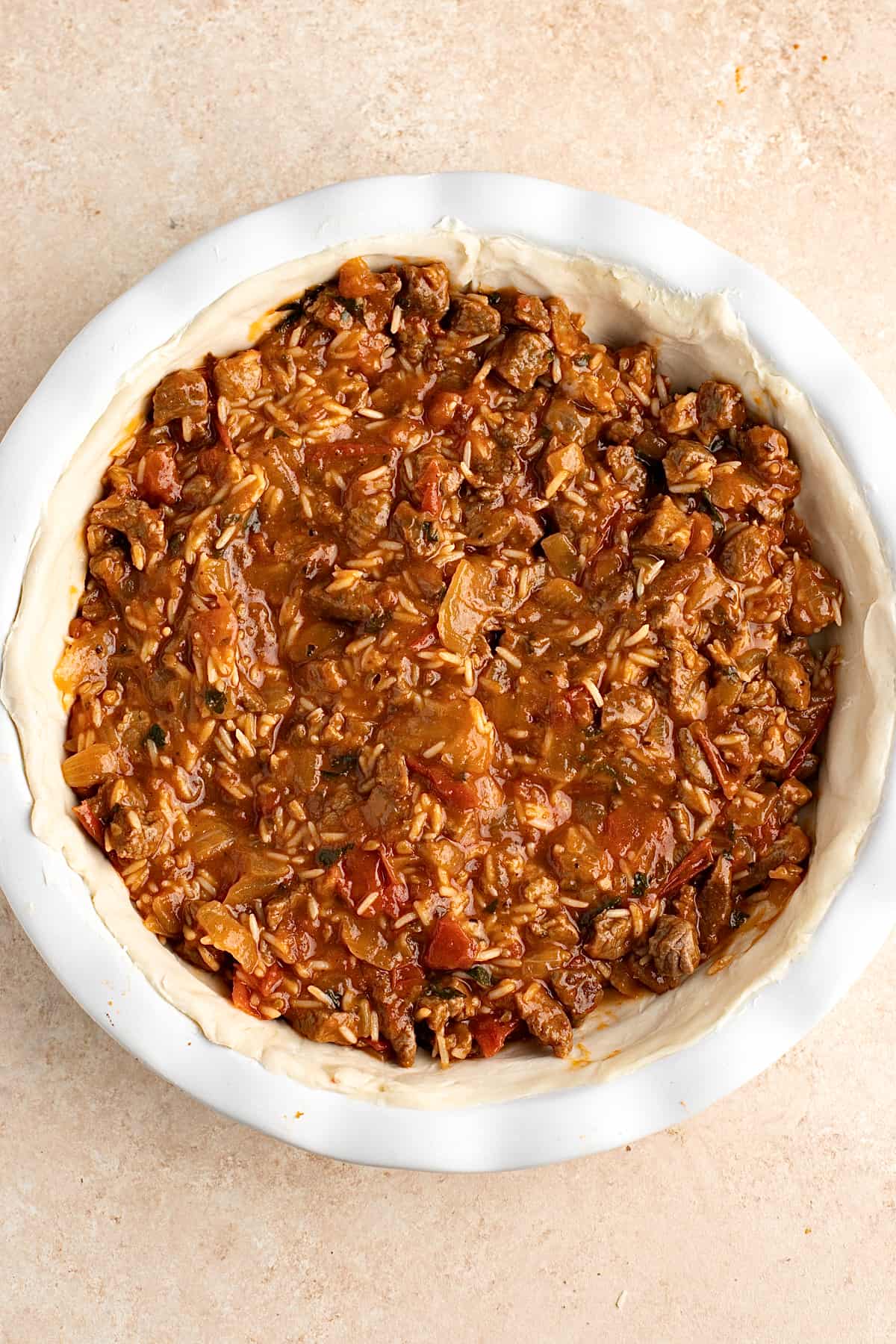 To make the lid, roll out the smaller block and add it to the top of the pie, pressing down to seal the pastry where you added the egg.

Trim off any excess and brush the top of the pie with egg wash. Cut two small holes in the centre so steam can escape as it cooks.

Finally, cook in the oven for 1 hour or until the pastry is golden. Leave your kreatopita to cool for 15 minutes before cutting and serving. 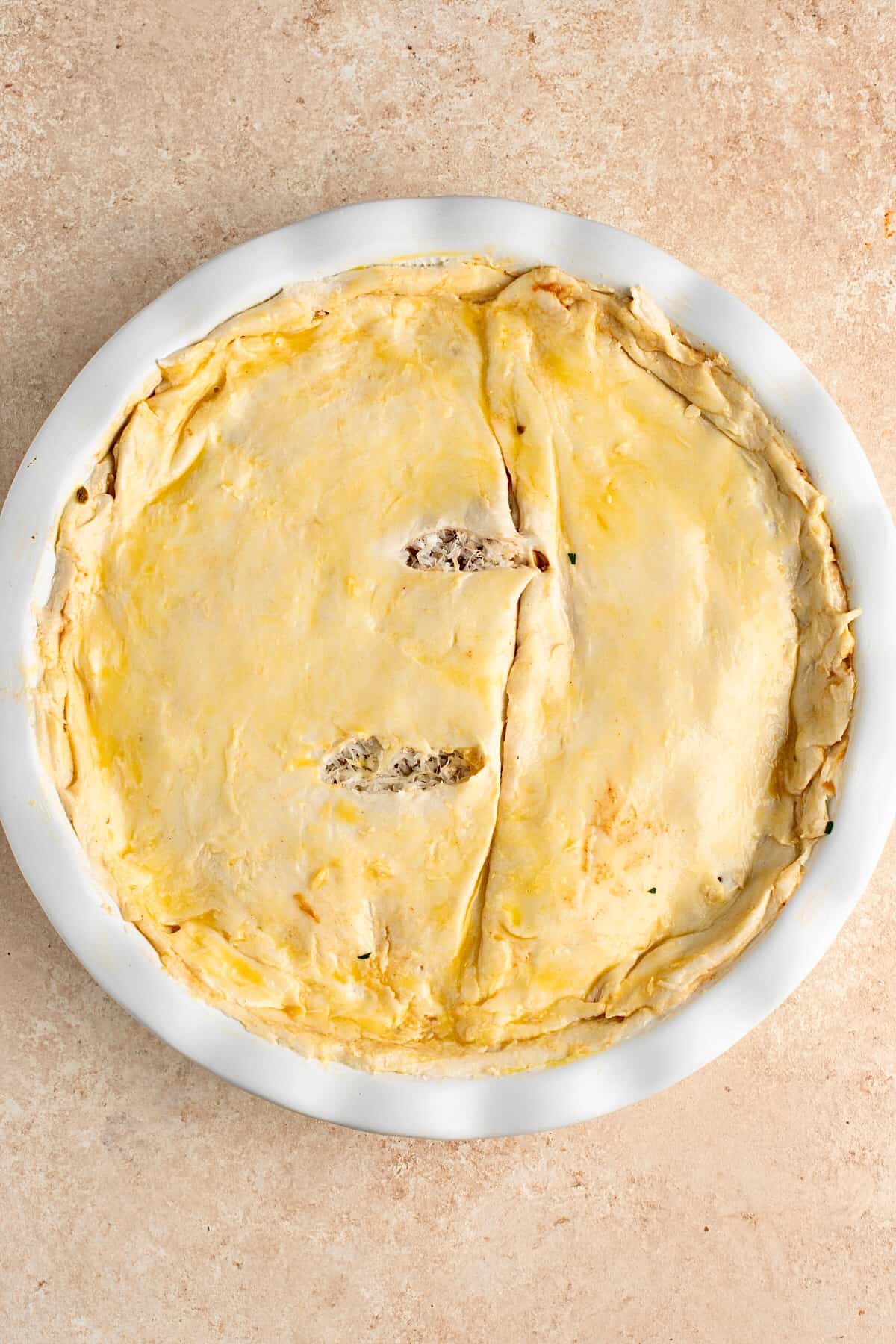 Can you use filo pastry?

You can definitely use homemade filo pastry for your pie! Feel free to give it a go using this easy homemade phyllo recipe. However, if you are not the most confident in working with pastry, use ready made puff pastry. It tastes great and it is also a huge time-saver!

Finally, don’t worry if the block of pasty you’ve bought is a little different in size than in the recipe below. Just follow the measurements as a rough indication of what is needed to cover the dish and adapt for your own bakeware.

I find it easiest to make the pie filling the day before I want to make the pie. Pop it in the refrigerator until you are ready to assemble the pie. Just take your filling out of the fridge, prepare your pastry, assemble and bake as per the recipe below. 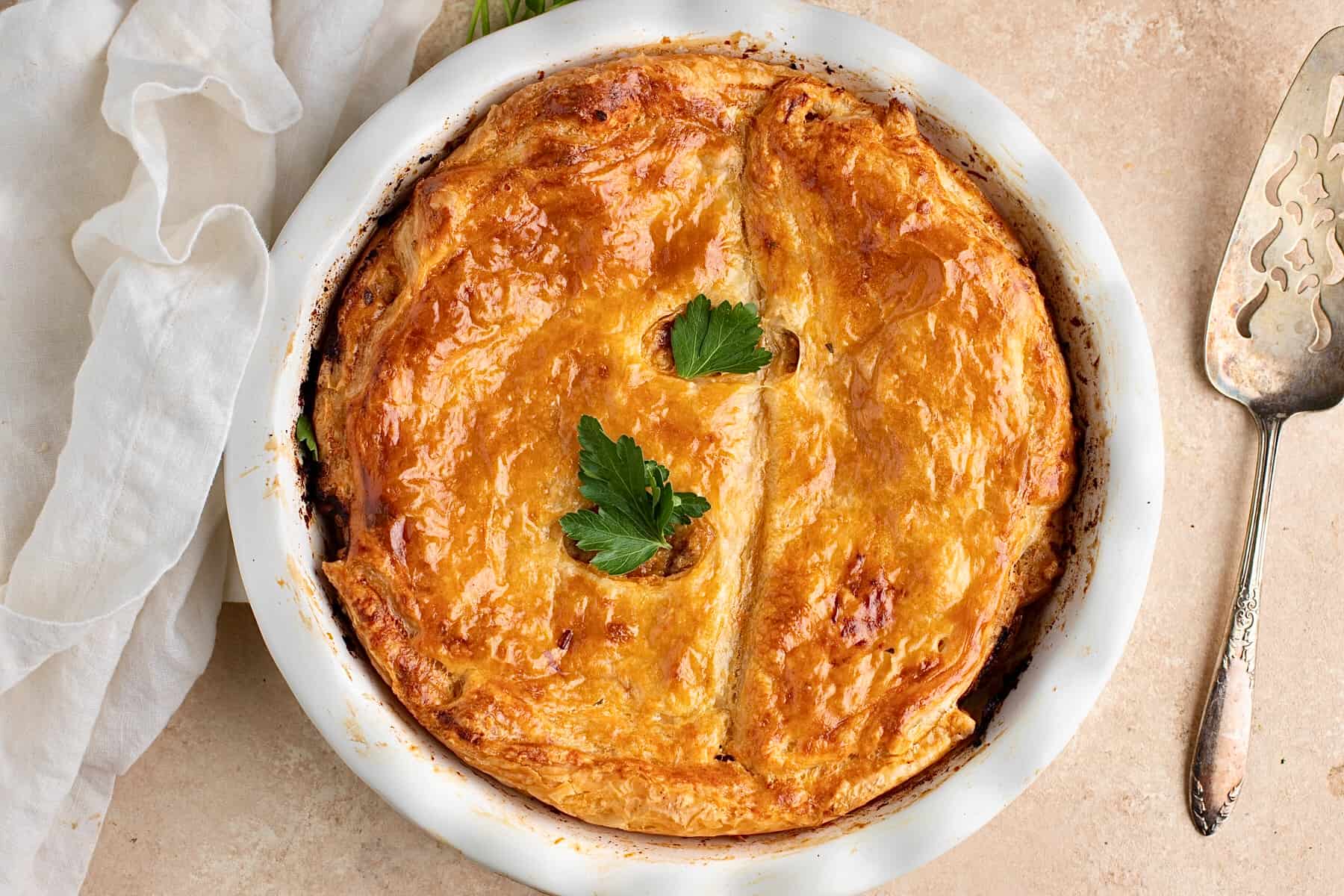 If you have leftovers, let them cool and store leftovers in the refrigerator for up to three days. Just reheat in the oven before serving.

Finally if you want to freeze the entire pie, its best to do this before baking it. Assemble but don’t glaze with egg, cover with plastic wrap and some foil then freeze for up to 2 months. Thaw completely overnight then cook in the oven as directed.

As the main course, Greek meat pies are perfect with something like a tabouli or Horiatiki Greek salad. You can also enjoy it as a light meal on its own! 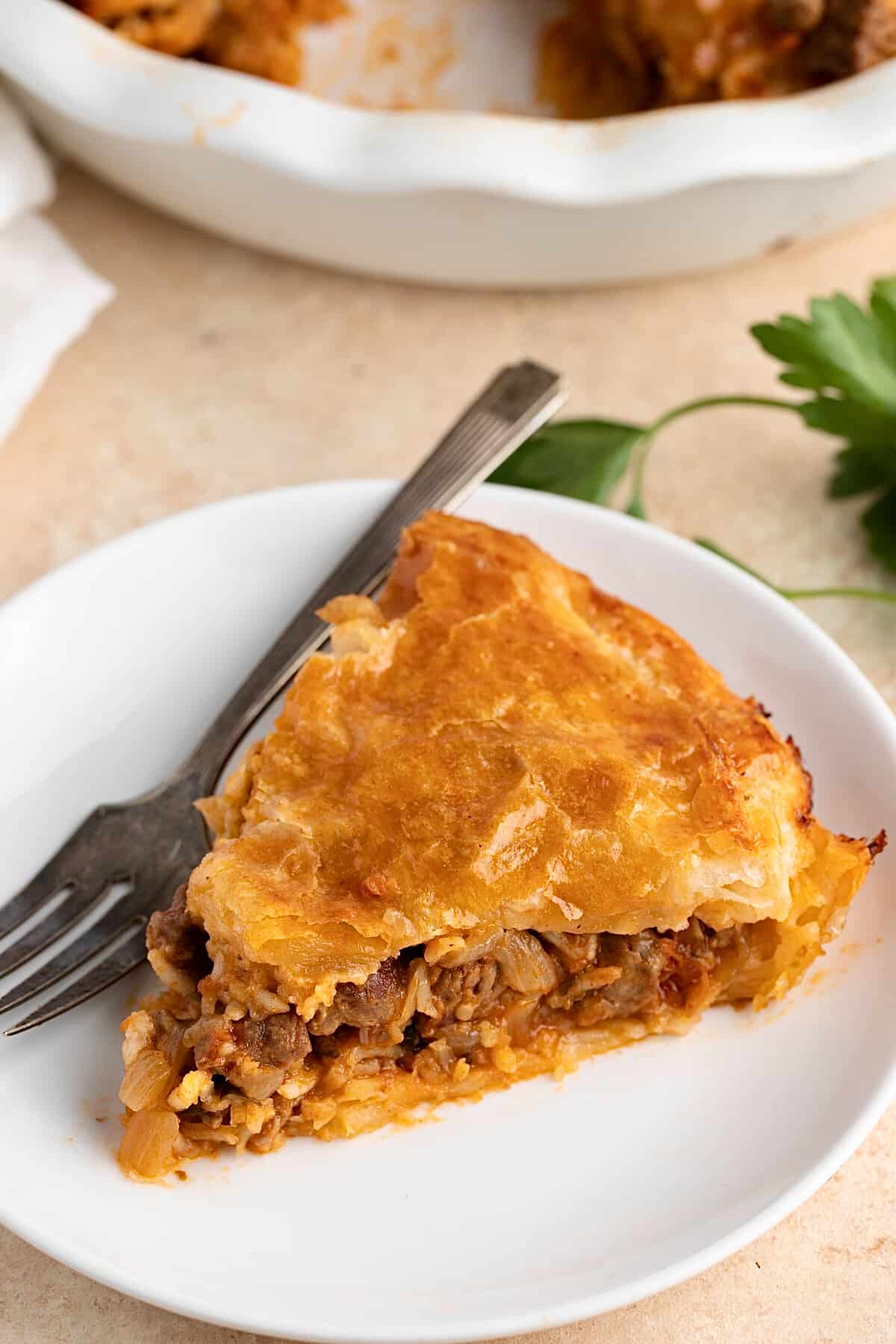 If you are looking for a classic Greek meat pie, then this recipe for Kreatopita will be just what you need! Combining two different types of meat, it is a traditional, rustic pie you would see in villages across parts of Greece

For the Greek meat pie filling

For the Greek meat pie filling

To assemble the Greek meat pie