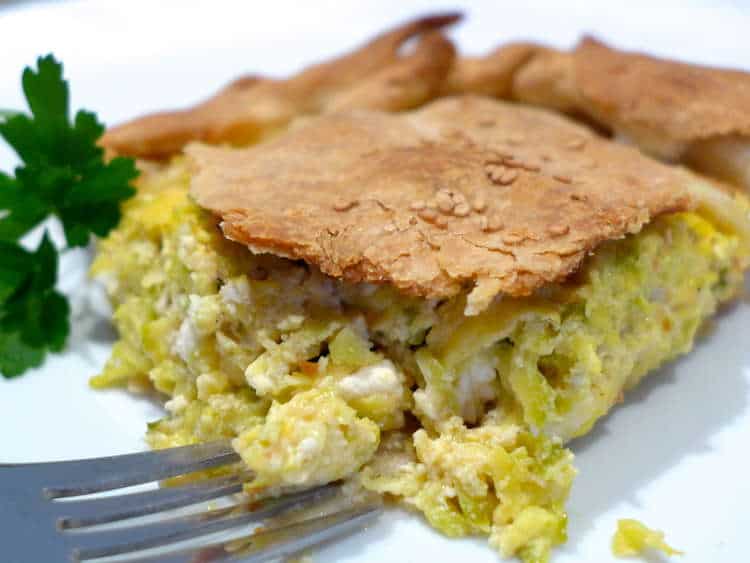 Sumptuous savoury pies are a staple in Greek cooking. From the classic spanakopita, chicken pie (kotopita) to cheese pies of various sizes and shapes, savoury pies are suitable for every time of the day, as a main dish, starter or mid-day snack.

This is a traditional Greek zucchini pie recipe (kolokithopita) for you to recreate this delicious vegetarian delight from scratch! (See also the preparation photos below).

Traditional Greek recipes for homemade pies use homemade phyllo dough or commercial ‘village’ dough (xoriatiko phyllo), which is a little bit thicker than the usually paper thin phyllo and gives a more rustic touch. As ‘village dough’ is a little bit difficult to find, you can make this traditional Greek zucchini pie recipe (kolokithopita) using either commercial phyllo dough or, if you are feeling adventurous enough, make your own homemade phyllo with this easy to follow recipe.

Roll each sheet of dough with passion for good food and it will truly reward you with a crispy, flaky and delicious crust on your traditional Greek zucchini pie!

If you choose to prepare this zucchini pie recipe with commercial phyllo dough (skip steps 1-3 and 6) use 4-5 sheets of phyllo to form the bottom of the kolokithopita and 4 for the top, brushing each one with melted butter. (For the beginners at working with phyllo, check the handling tips before starting.)

So go ahead give this delicious traditional Greek zucchini pie recipe a try and amaze your friends and family with this crispy and velvety delight. Enjoy!

A traditional Greek Courgete/ Zucchini pie recipe, made with home-made phyllo! This Kolokithopita recipe is made with juicy zucchinis, tangy feta cheese and creamy Greek yogurt, all combined into a velvety delight!