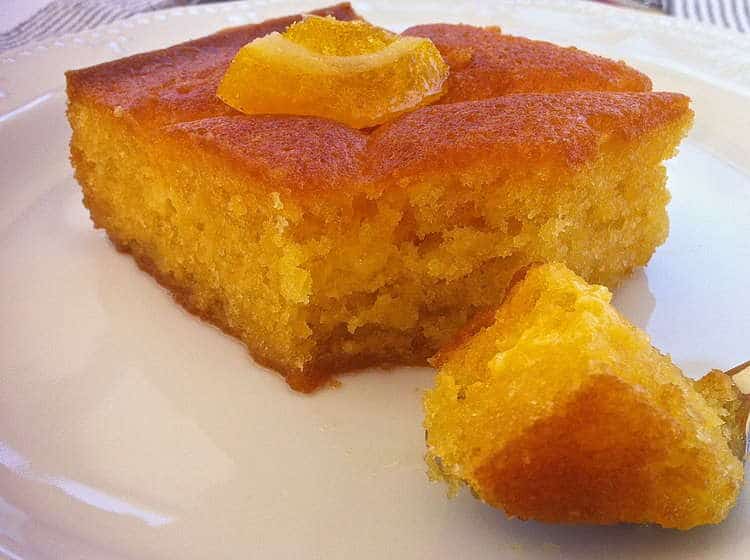 Fluffy and colorful and soaked in a delicious orange scented syrup! A mouthwatering Greek Orange cake (Portokalopita) with the aromas and blends of fresh oranges and cinnamon.

This is my ultimate cake which always surprises my guests when I tell them that it actually has no flour in it! Intrigued? Go ahead and discover what is portokalopita (orange syrup cake), how to make it the traditional way with my tips and tricks, how to store it, what to serve it with and of course my recipe!

The name Portokalopita is a Greek compound word formed from the roots “portokáli,” which means oranges, and “pita,” which refers to pastry. Why? Because this cake is made using phyllo pastry sheets! Even its Greek name literally translates to greek orange pie!

There is a saying that this Greek cake originated as a means to utilise the remaining dried up phyllo flakes that were left over when making traditional greek pies, like cheese pie and spinach pie. Which I must say is ingenious! It’s kind of like recycling but much tastier!

Most of the ingredients in this traditional Greek orange cake are fairly standard and most likely are already in your cupboard. The key ingredients that make all the difference in this recipe are: 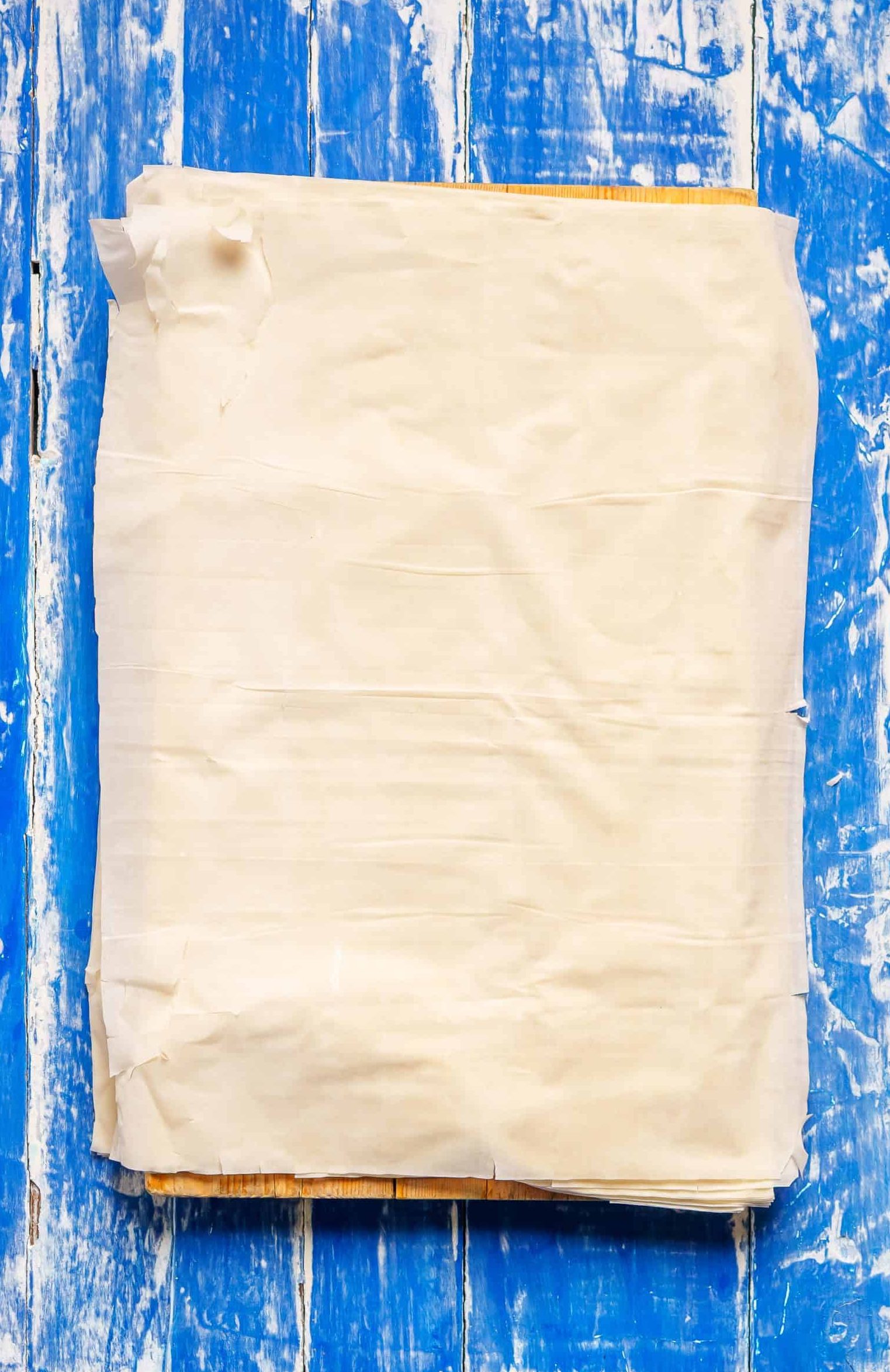 Preparing the phyllo for your Portokalopita

As the traditional portokalopita has no flour, it is very important that the phyllo sheets are prepared correctly – they act as the flour in your cake! So how to prepare them the traditional way?

Firstly, make sure your portocalopita phyllo sheets are completely dry. When preparing your orange syrup cake, the first thing to do is to take the phyllo sheets out of their wrap, crinkle them a bit with your hands and spread them over your work surface and let them stand for about 20 minutes until completely dry.

Alternatively, if you are short on time, crinkle the phyllo up and place it on baking trays and pop them in the oven at 100C/200F to dry. You’ll need to do multiple batches, so when the first batch is ready take them out, crumble them by hand and then repeat until all your portokalopita phyllo is dry. 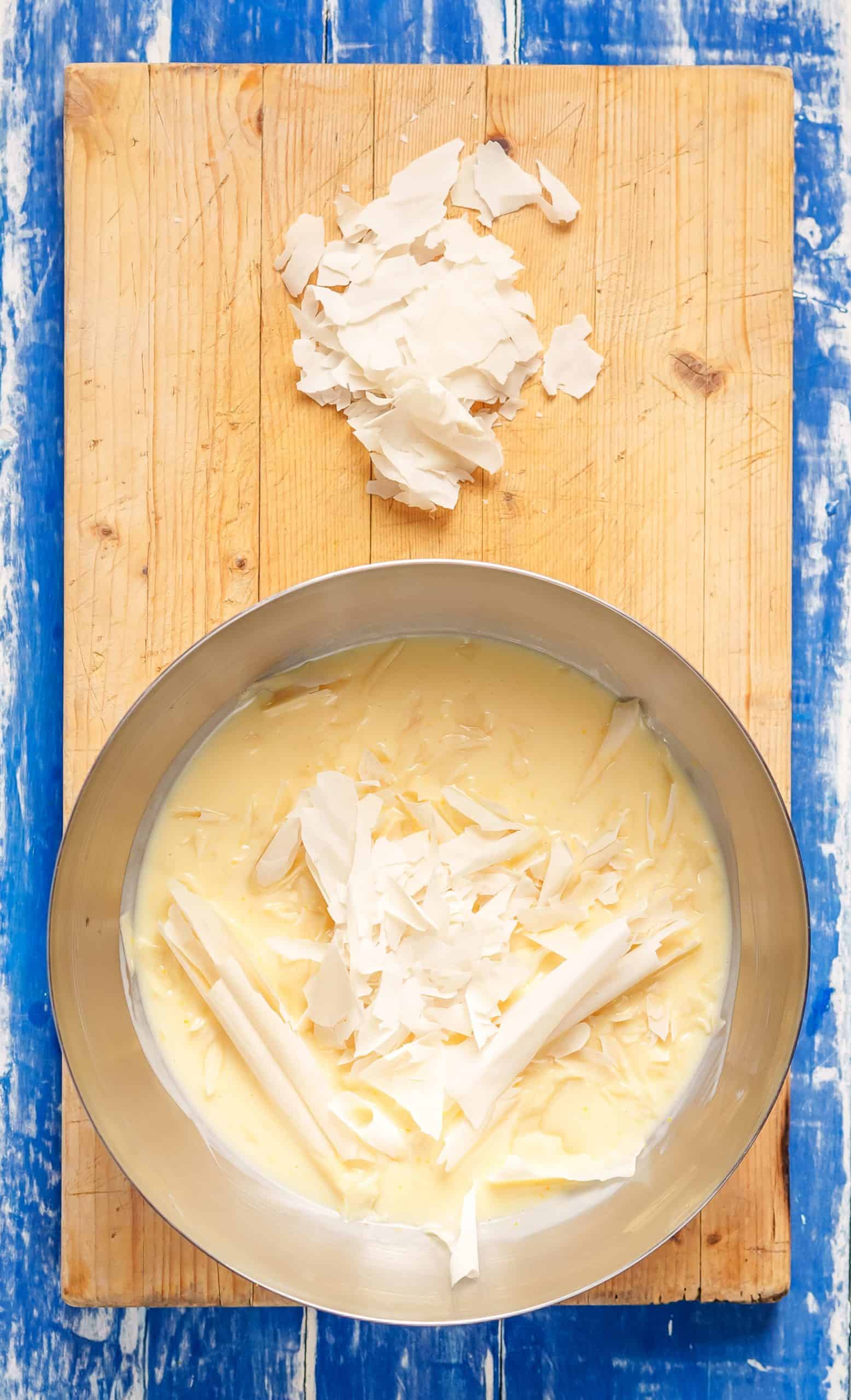 To prepare your greek orange pie start by making the syrup. Bring a pot of water, sugar, orange zest and a cinnamon stick to a boil. Simmer for 5-10 minutes, until the sugar is completely dissolved and the syrup has thickened. Allow to cool before using. 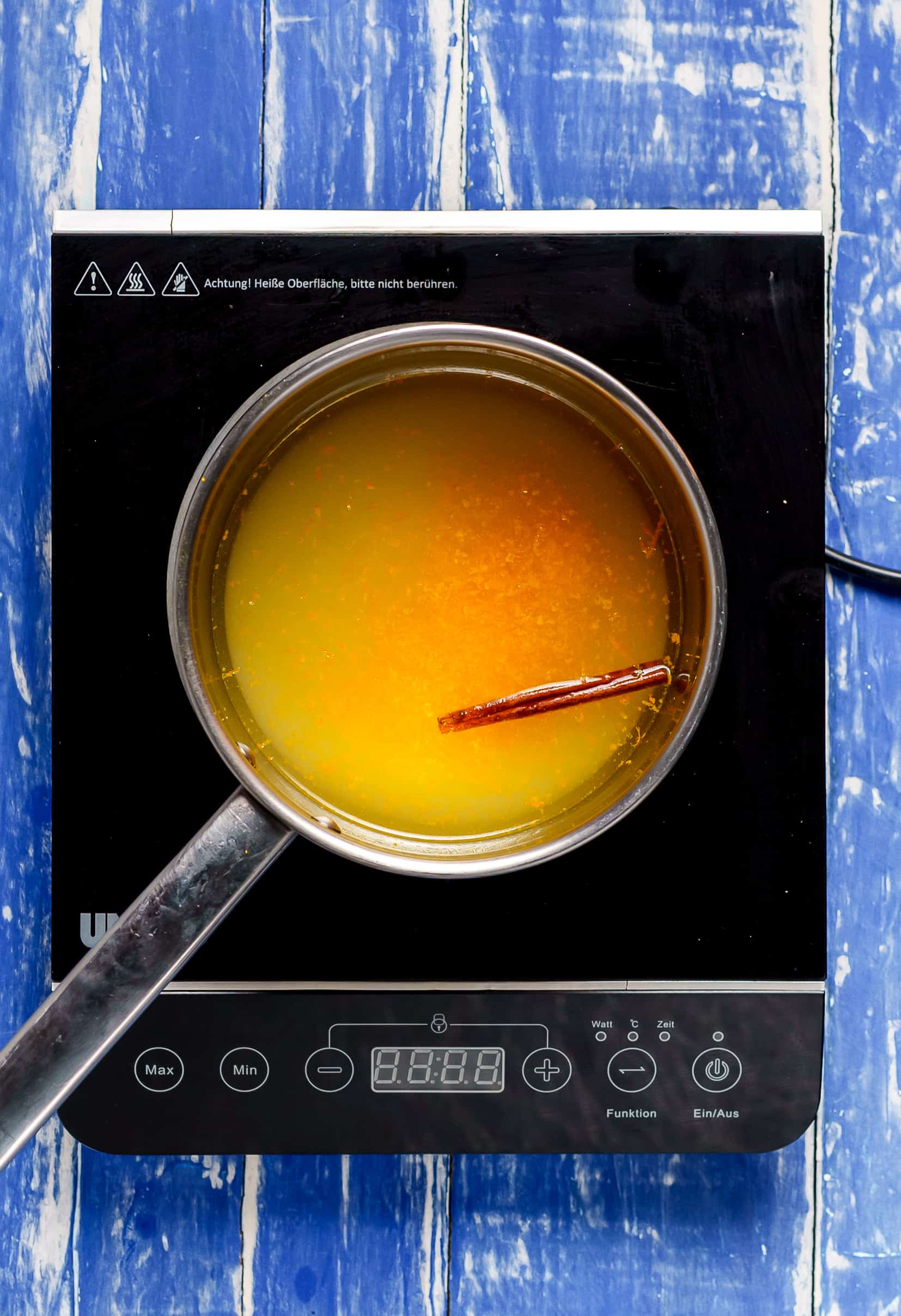 Meanwhile, prepare the orange cake mix. In a large mixing dish, combine the vegetable oil, sugar, and eggs and whisk until combined.

Take the orange zest, yogurt, orange juice and vanilla extract. Combine all of the ingredients in a medium-size mixing bowl with a whisk. Add the baking powder in small batches before adding to avoid clumping together.

Using your hands, crumble the phyllo into tiny pieces. Add them carefully while whisking so that they don’t clump together.

Get a baking tray approx. 20x30cm / 8×12 inch in size, oil the bottom and sides, then add the mixture. Bake for 40-50 minutes at 180C/350F until golden brown and cooked throughout. Test for doneness by piercing a hole with a knife; if the knife comes out clean, the greek orange pie is cooked. 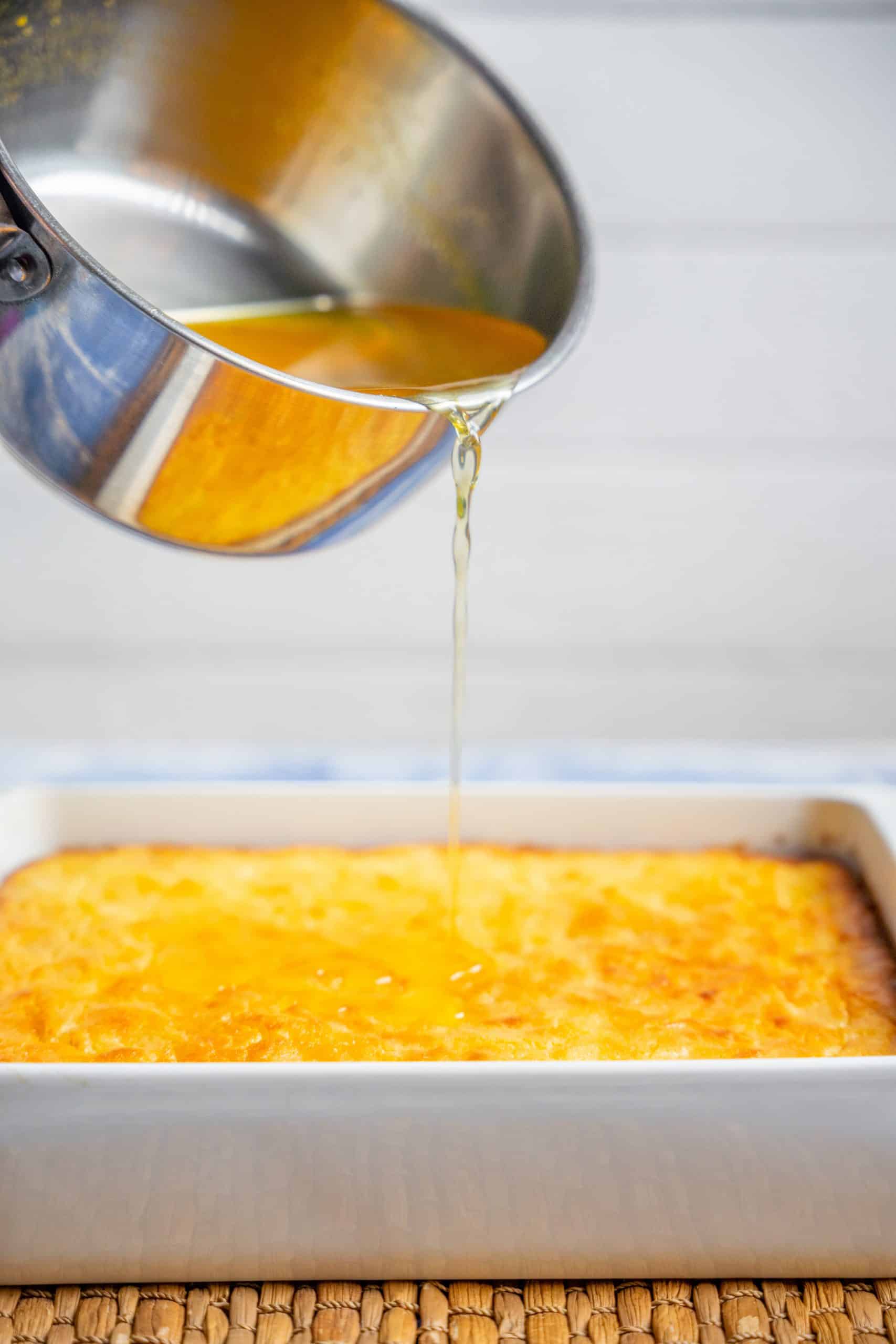 This Greek orange phyllo cake is ideal for making ahead of time! It must stay in the fridge for a while before the syrup can fully settle into the cake base, so it’s best to make it the day before you plan to serve it.

This orange syrup cake can be served cold, which I prefer, or at reheated to be lukewarm. To warm it up, serve a slice on a plate and pop it in the microwave for 30 seconds to take the chill off. Experiment with what you prefer and let me know in the comments below!

You can store your leftovers in the refrigerator for up to 5 days. This cake is not intended to be frozen as the phyllo sheets become soggy and will loose their delicious texture and flavor. 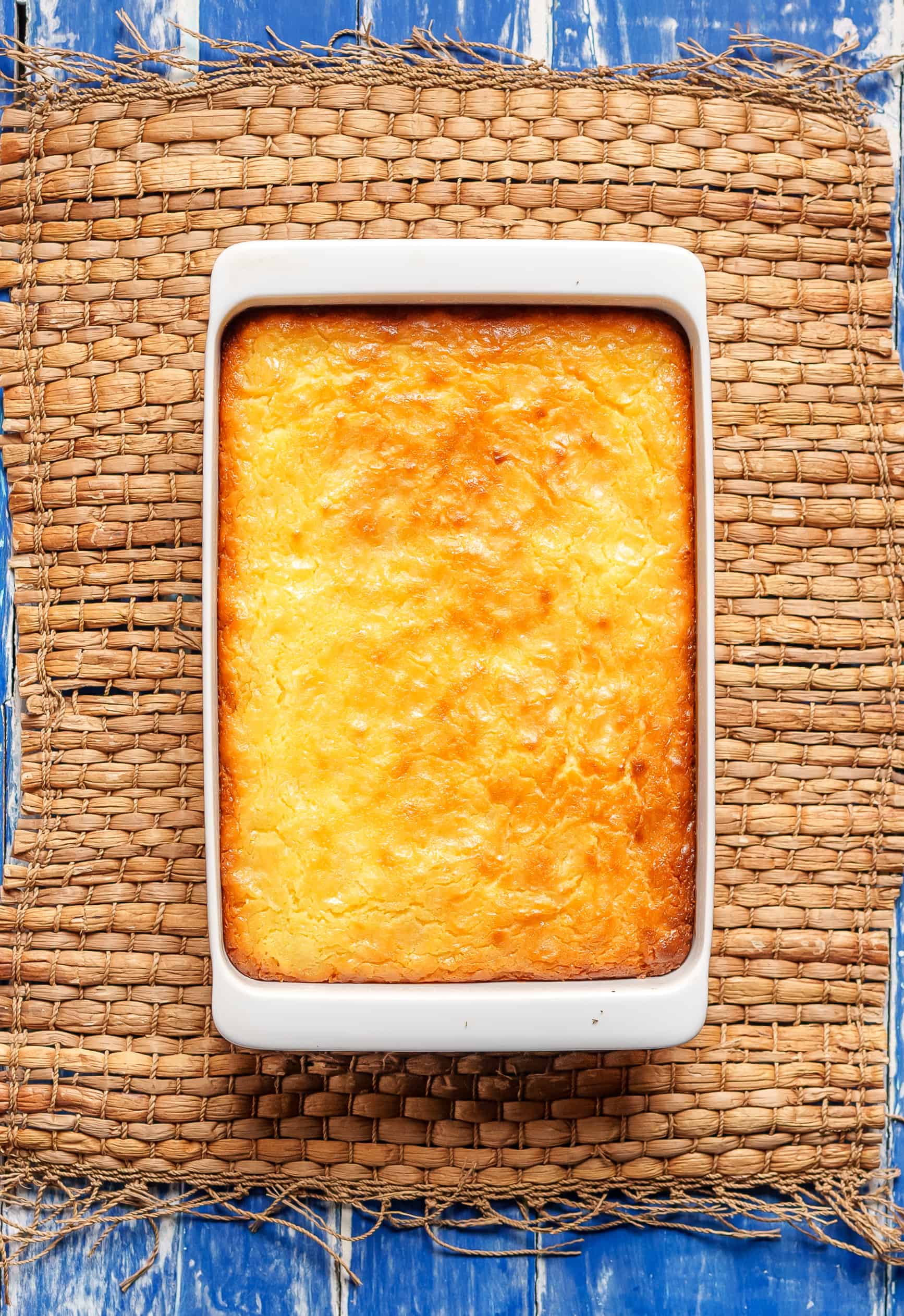 To add a touch of class, top the cake with thinly sliced oranges before baking. Before serving, you can drizzle your slices with chocolate syrup which goes amazingly well with the orange flavour of this cake! On a summer day, add a scoop of ice cream on top or some Greek yogurt on the side when you serve it, particularly if it’s hot outside!

If you love orange scented desserts as much as I do, these recipes are made for you!

Looking for a traditional Greek Orange cake recipe? Discover the secrets behind making this extra syrupy Portokalopita infused with the aromas of oranges and cinnamon.