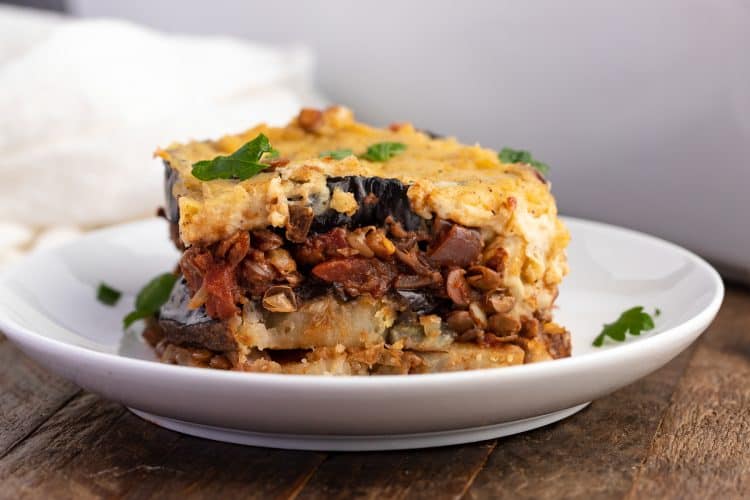 So you love moussaka but you are fasting for lent or you are a vegan? That doesn’t mean you have to miss out on your favorite dish anymore! This is my delicious vegan moussaka with lentils recipe that I’ve specifically crafted so it keeps the essence of the traditional one, yet is fully plant based! This recipe is so good, you won’t believe it is vegan!

With my Vegan Lentil Moussaka, you get all the delicious potatoes and eggplants along with a vegan-friendly Béchamel sauce that even uses a clever ingredient to create that cheesy flavor on the topping and my delicious, packed with flavour, lentil based filling!

So read along to discover what you’ll need to make the most delicious vegan lentil moussaka, my tips and tricks to help you make it to perfection, my step by step photos, and of course my unique recipe! 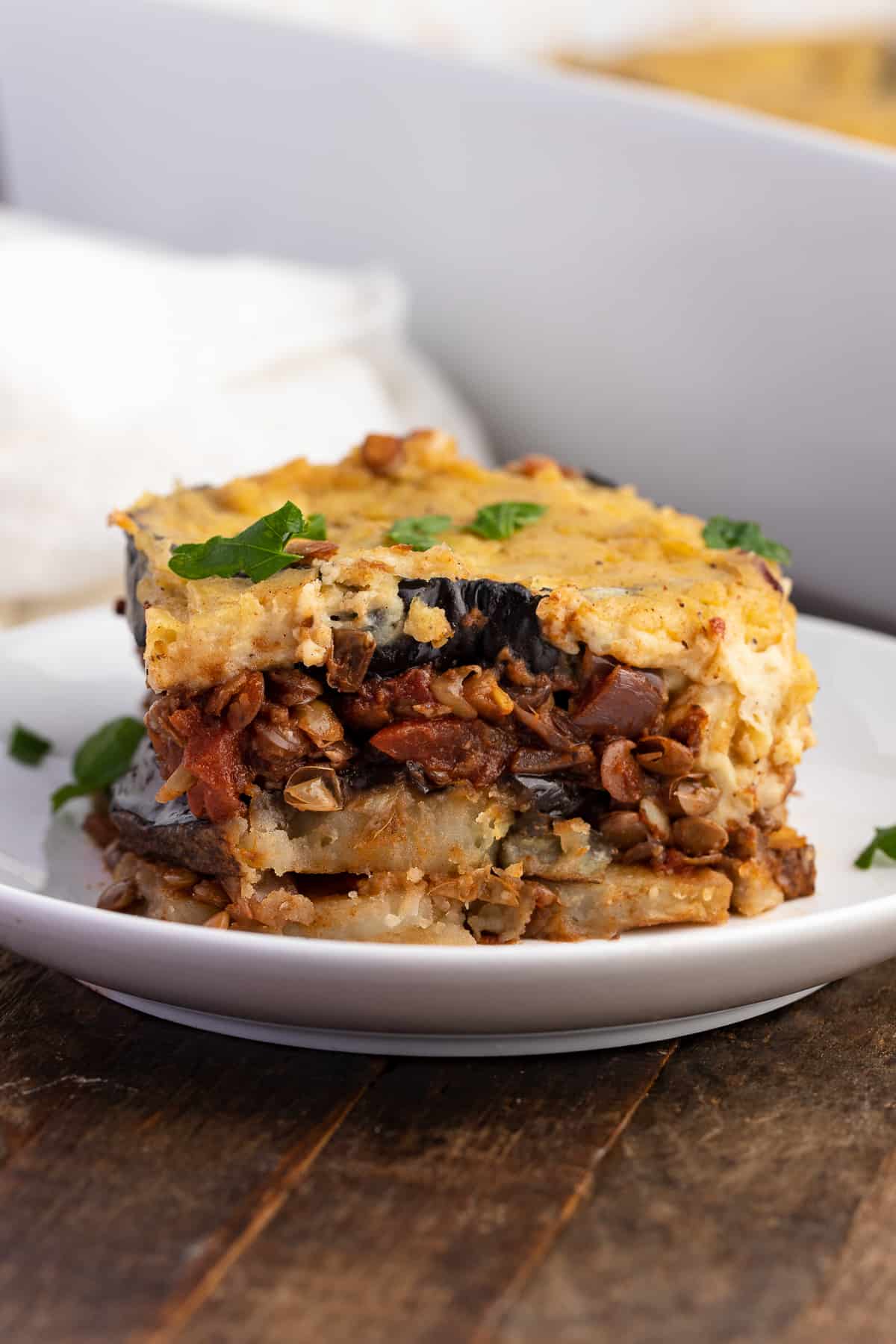 What is a traditional Moussaka?

Moussaka is arguably the most famous Greek dish. It is served in every Greek taverna and is the dish of choice for a large family gathering and special occasions.

Moussaka is a delicious eggplant, potato and mince meat casserole topped with a deliciously creamy and cheesy béchamel sauce. The essence of the traditional moussaka is summarised in:

So keeping the above in mind, how can we make the perfect Vegan moussaka while keeping its “essence” – the umami packed filling, its creamy béchamel and its deliciously juicy vegetables intact? 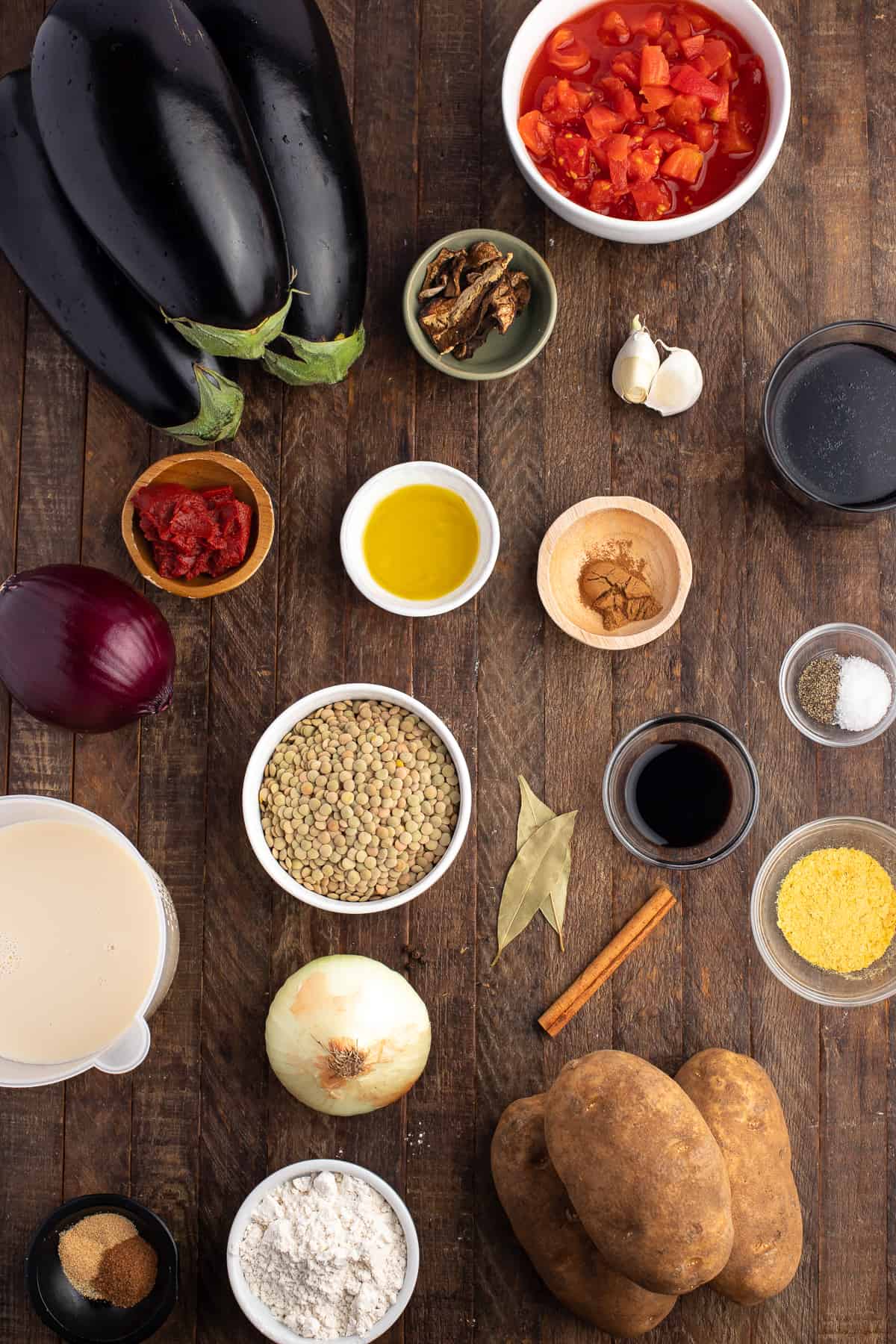 In order for your Vegan moussaka recipe to keep its authenticity, we need to carefully select our meat and dairy substitutes. After plenty of experimentation I’ve narrowed it down to the following key ingredients:

Tip: You can use almond milk in place of soy milk if you prefer. It will give the sauce a nuttier flavor but it won’t brown as much as it would with soy milk. So if you want to use this option, add some breadcrumbs to the top to help brown the dish. 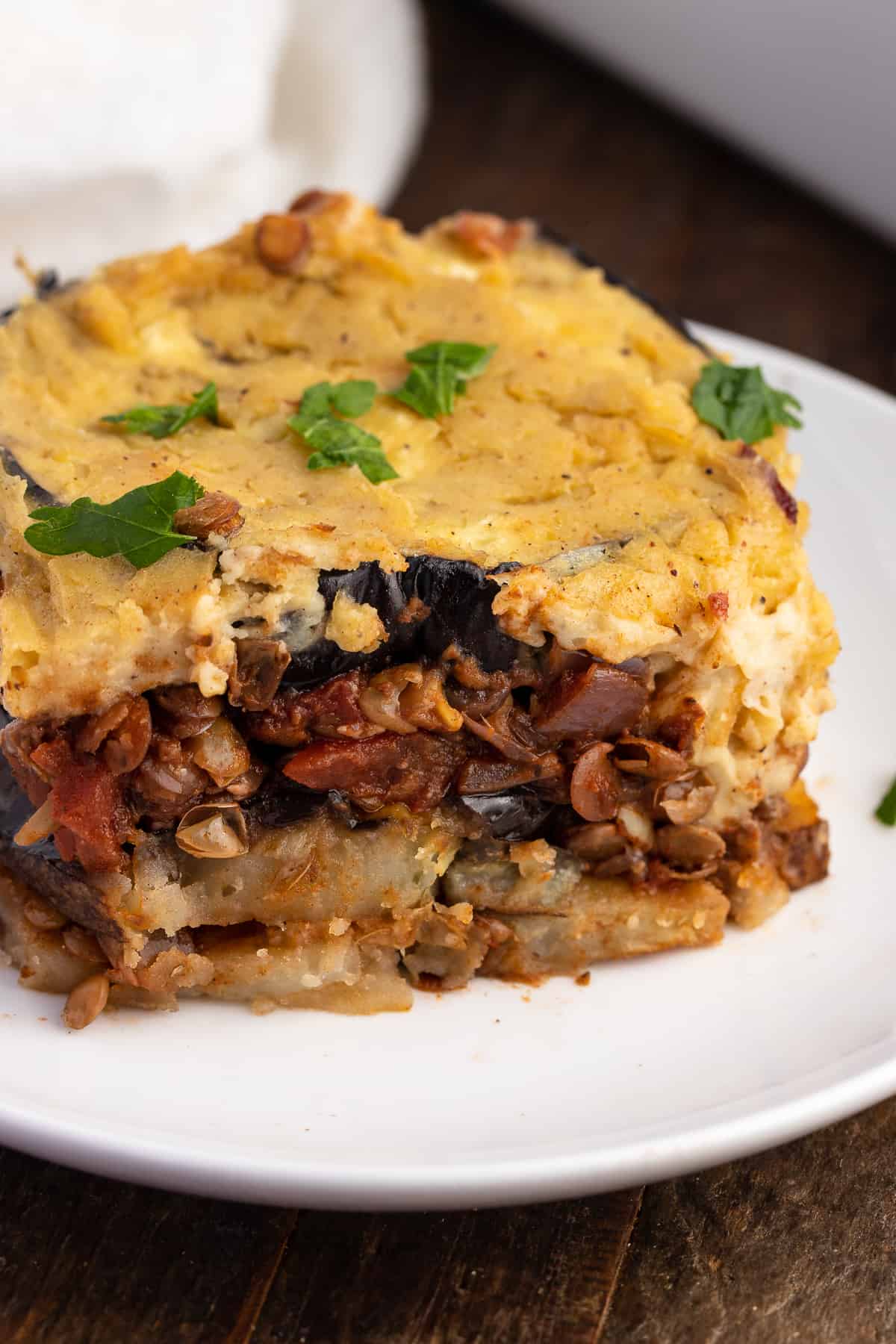 Preparing your Vegan Moussaka with Lentils

So get your pans out and let’s get started!

To prepare your Vegan Moussaka recipe lentil sauce, you’ll firstly need to soak your dried mushrooms in 500ml / 2 cups of boiling water. This will help the mushrooms hydrate!

Then in a large saucepan, warm 2 tablespoons of olive oil over medium-high heat. Add the red onion and cook for 5-6 minutes until translucent and just beginning to color. Add the crushed garlic and cook for another minute until its aroma is coming through. 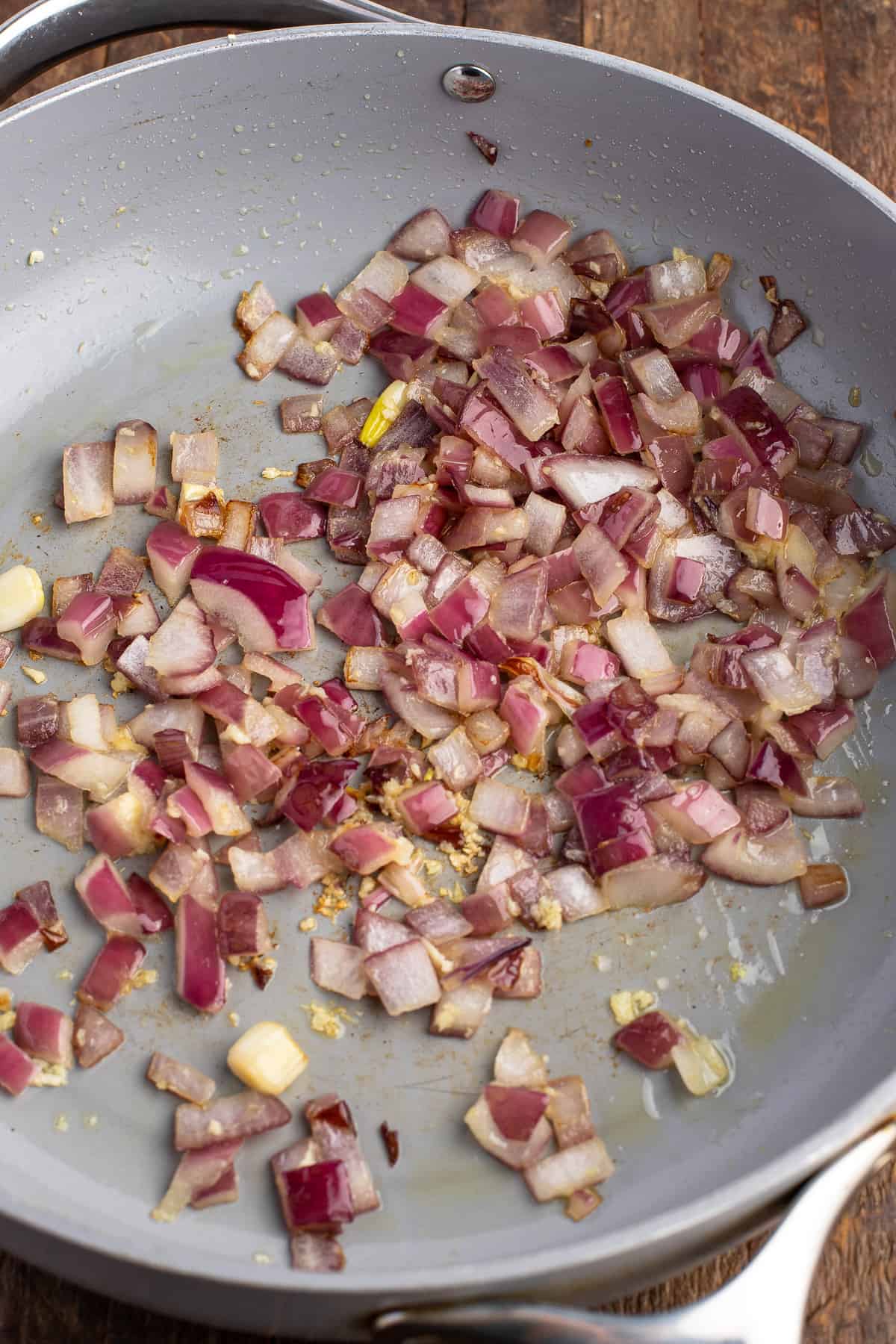 Next stir in the chopped tomatoes, red wine, balsamic vinegar and the water from the dried mushrooms, keeping a little aside to wash out the tomato tin to get all that delicious tomato juice! Stir in the lentils, oregano, the bay leaf and lastly add the soaked dried mushrooms.

Bring to a boil, then season with salt and pepper. Reduce the heat to medium-low and simmer for 1 hour until the lentils are soft, stirring occasionally.

Tip: Keep an eye on your lentil sauce when its cooking. If it looks like its drying out add a little more water and stir. 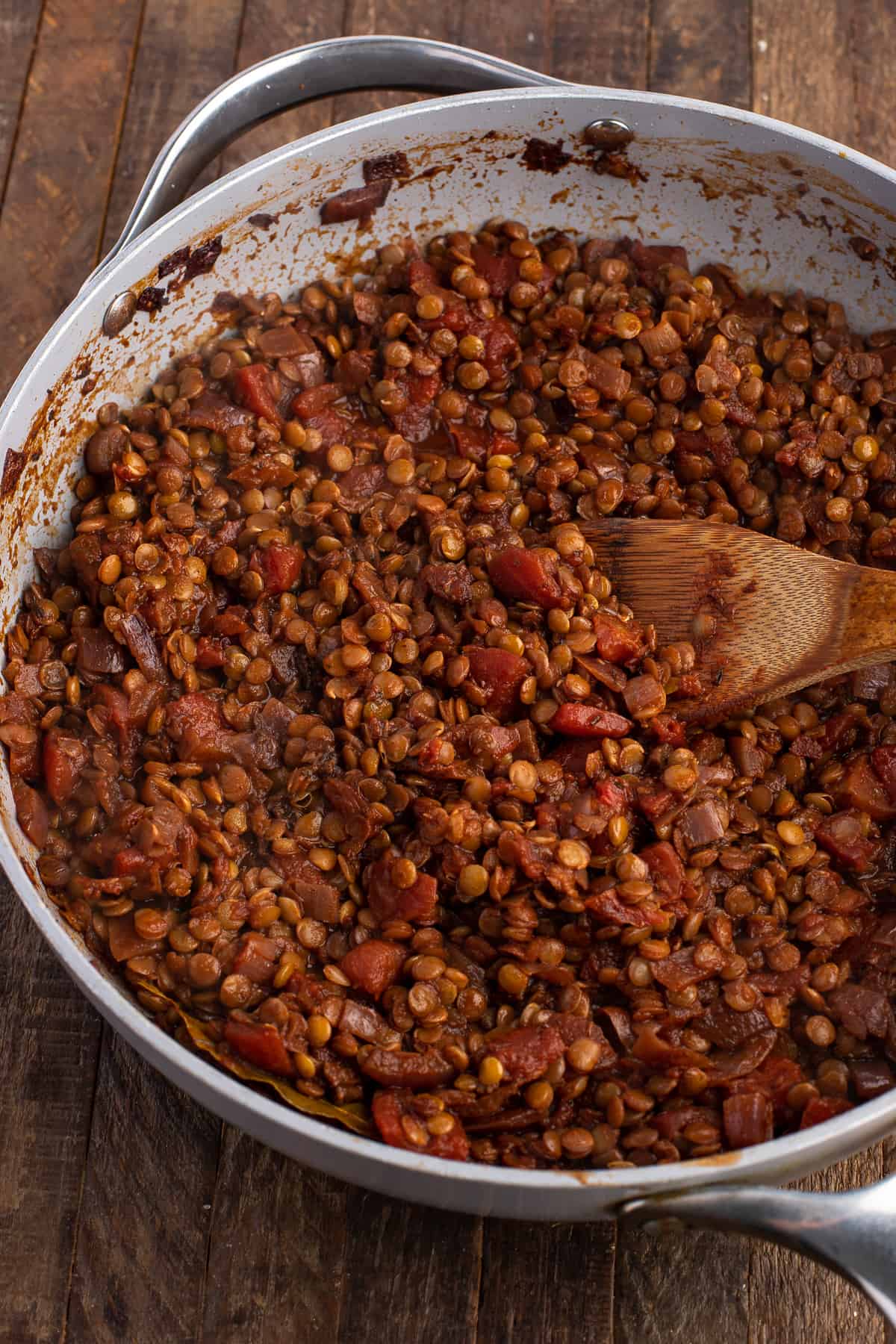 To prepare our delicious Vegan Bechamel sauce firstly we will need to infuse the milk. In a medium sized pot add your soy milk, the roughly chopped white onion, the cinnamon stick, the peppercorns and the bay leaf. Cook over medium-high heat until it just comes to a boil then remove and set aside to infuse.

To make the béchamel sauce, you’ll first need to make a roux. In another saucepan, heat the extra virgin olive oil over medium heat. Once the oil is warm and has started to simmer, add the flour and whisk. Cook for 1-2 minutes stirring constantly so your flour cooks and looses that flour-y taste. 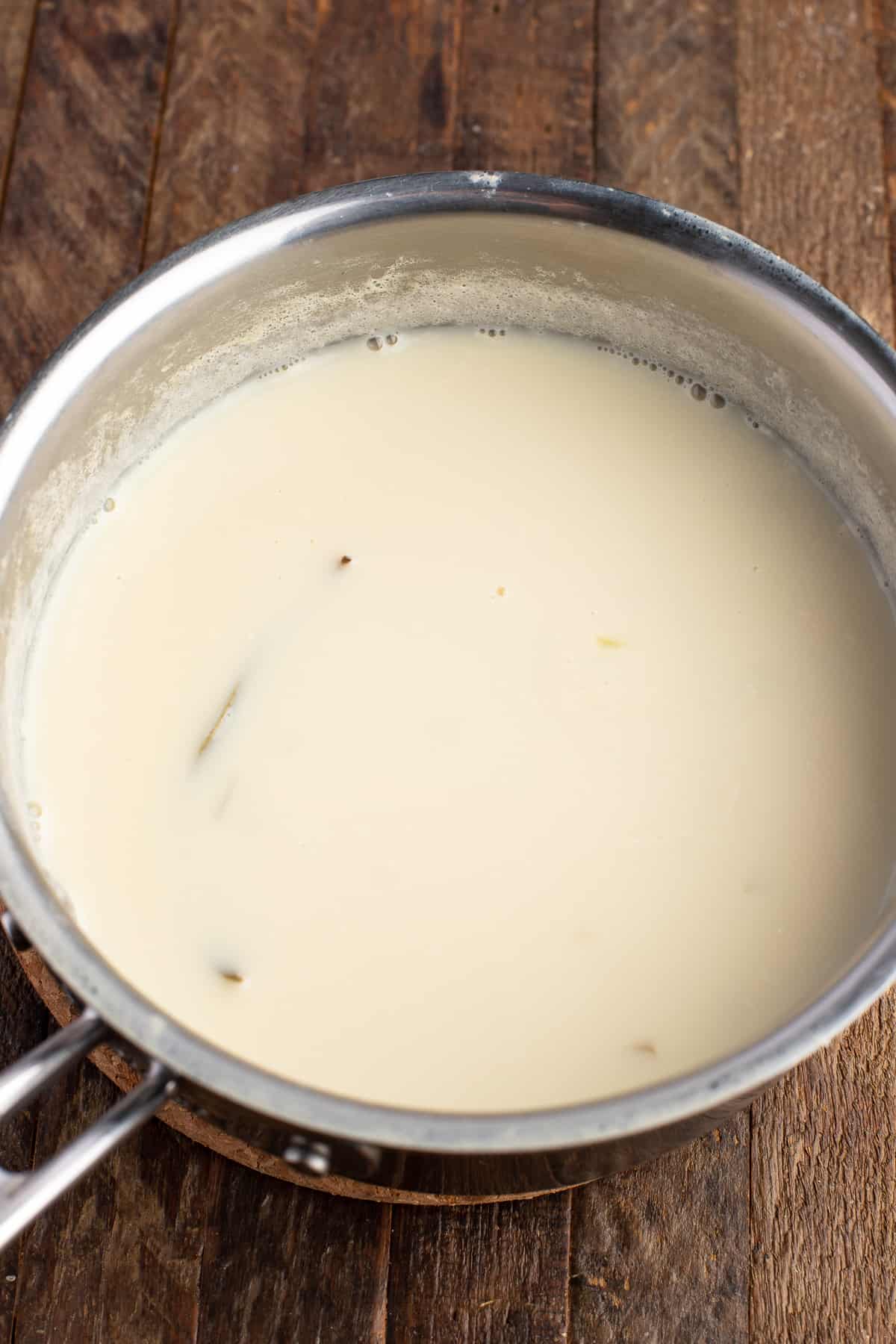 Strain your milk and gradually whisk in the flour mixture. You’ll need to keep whisking so no lumps form. To take some of the labour out, you can use your electric hand mixer with the whisk attachment!

Once all the milk has been absorbed into the flour and the sauce has thickened, remove from the heat and whisk in the spices – the nutmeg, garlic powder and salt. Add the nutritional yeast, whisk and taste. Add some more salt if needed to bring out the cheesy flavour of the yeast.

Start by preparing your potatoes. Slice them thinly and lay them our on a large baking sheet or two, depending on the size of your sheets and spray or brush with olive oil. Season your potatoes with some salt, flip them over and repeat.

Preheat your oven to 220C/430F and place your potato tray in to cook for approximately 30 minutes or until well browned.

Tip: Line your baking sheets with parchment paper – your potatoes won’t stick and you won’t have to flip them over while cooking either! Also, if you don’t have an olive oil spray you can brush olive oil onto the potato and eggplant slices using a pastry brush. 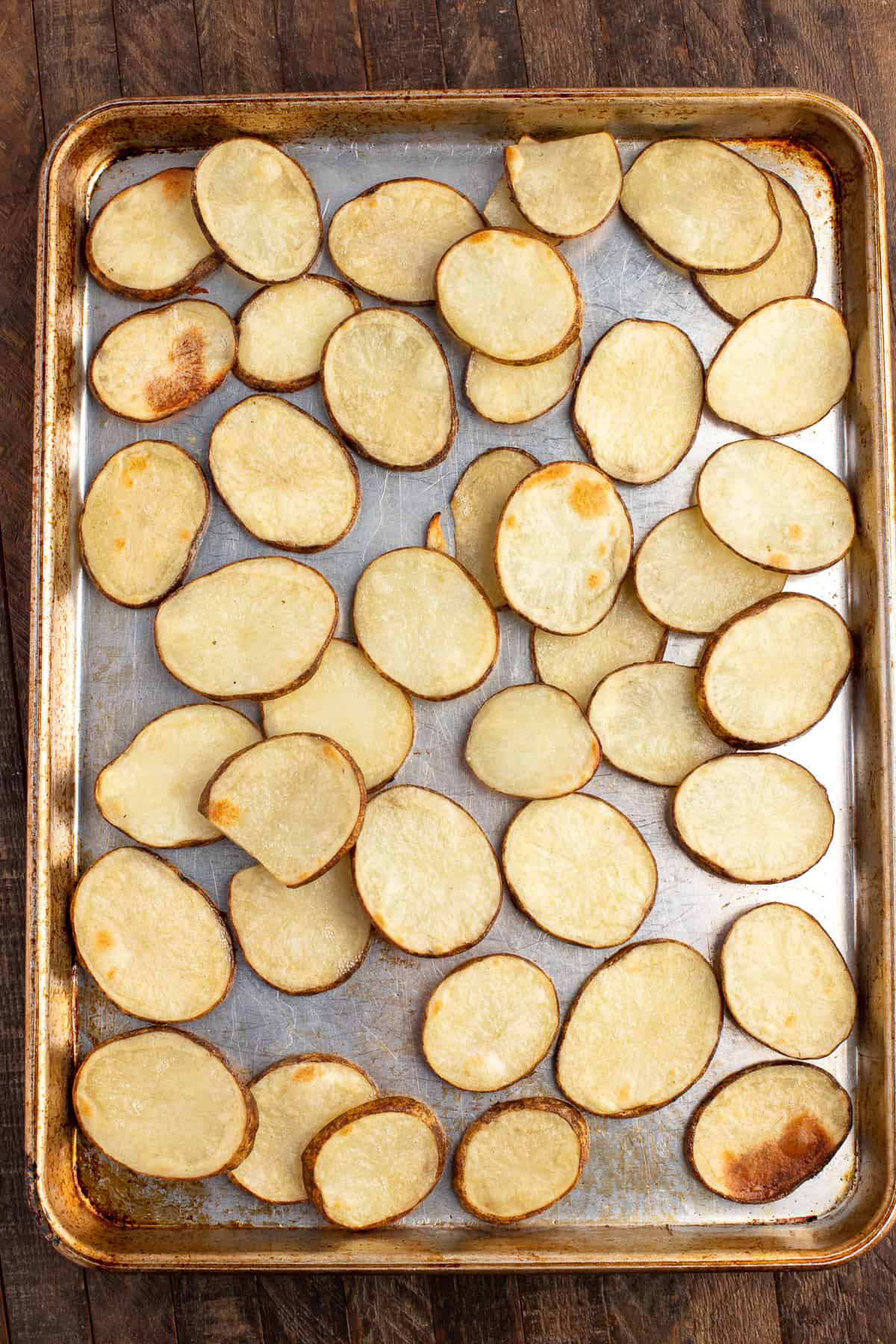 Now its time to prepare your eggplants. Cut them lengthwise into finger-width slices, place them on baking parchment lined baking sheets and season with salt. Spray or brush with some olive oil, flip them over and repeat.

In the preheated oven (220C/430F) bake your eggplants for approximately 20 minutes until tender. As with your potatoes, you won’t need to flip them over half way. However you’ll need to rotate the baking sheets in the oven half way to make sure they brown evenly!

Do you need to fry the potatoes and eggplant?

It is common to fry the potatoes and eggplant before assembling the dish but I roasted them instead for a healthier option. If you do prefer to fry them, cover the base of the pan with olive oil and cook over a high heat until golden on each side. Use some kitchen towel to blot away the oil and continue with the vegan moussaka recipe! 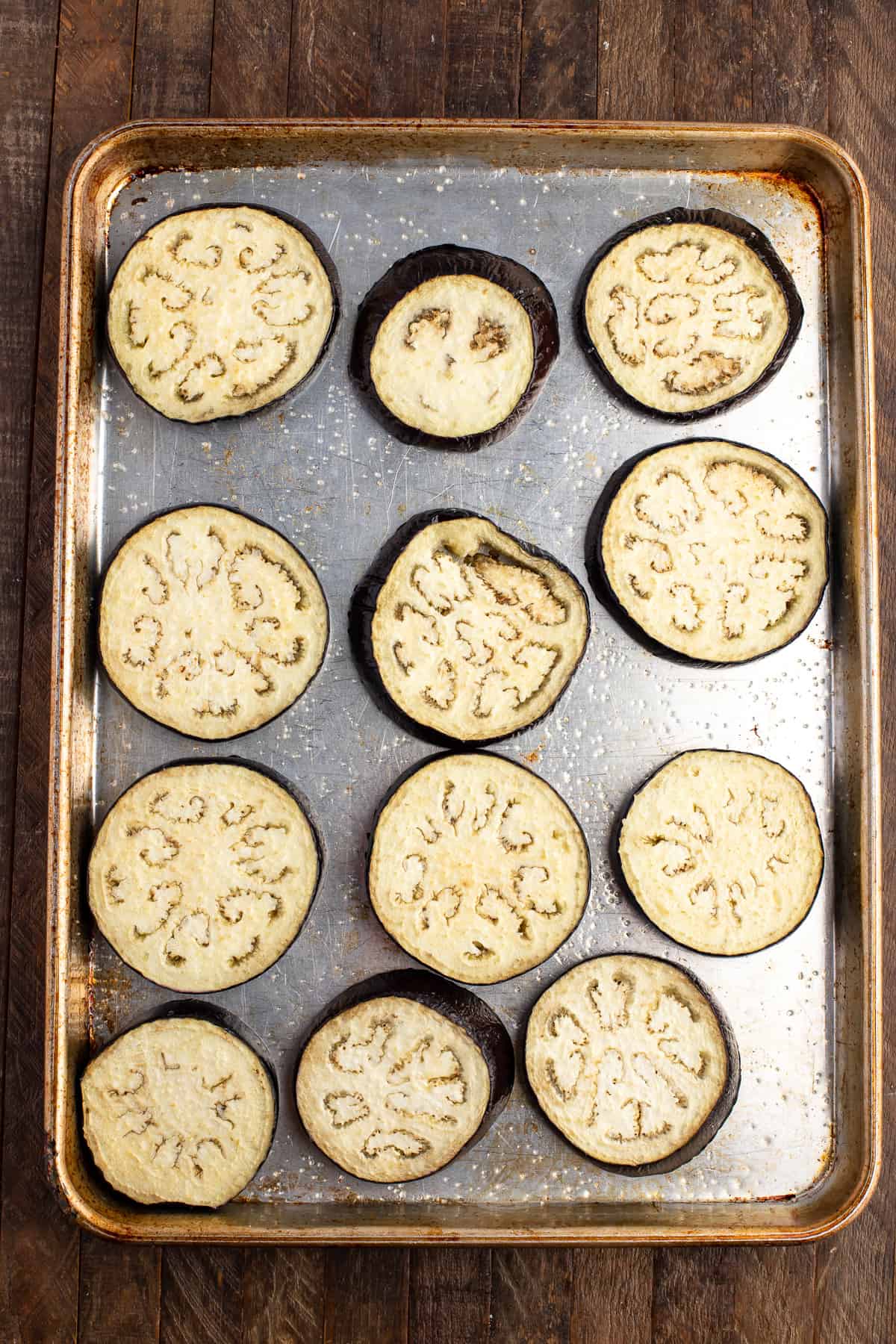 Do you need to salt the eggplant?

With modern eggplant varieties, there’s no need to salt them to remove bitterness. However, if you use heirloom varieties or find your eggplant is unusually bitter, you can salt the slices and leave them in a colander for about 30 minutes.

Rinse off the salt and squeeze out extra moisture before continuing with the recipe. Just skip the salt before roasting them if you do this.

Assembling your Vegan Moussaka with Lentils and baking it

Now that your key ingredients are all ready, its time to assemble the vegan moussaka and bake it. Start by spreading the potatoes in a single layer over the bottom of a deep 32cm x 20cm (12-inch x 8 inch) baking dish.

Then layer half of the eggplant slices, followed by the lentil mixture. Add the rest of the eggplant, spreading them evenly on top. Finally pour over the béchamel and smooth it over with a spoon or a spatula.

Reduce the oven temperature to 180C/350F and bake your moussaka for 30-45 minutes until the top is golden brown.

To serve, remove your vegan moussaka with lentils from the oven and let it rest for 10-15 minutes until it has cooled down a bit. This will help you cut the dish without it falling apart! 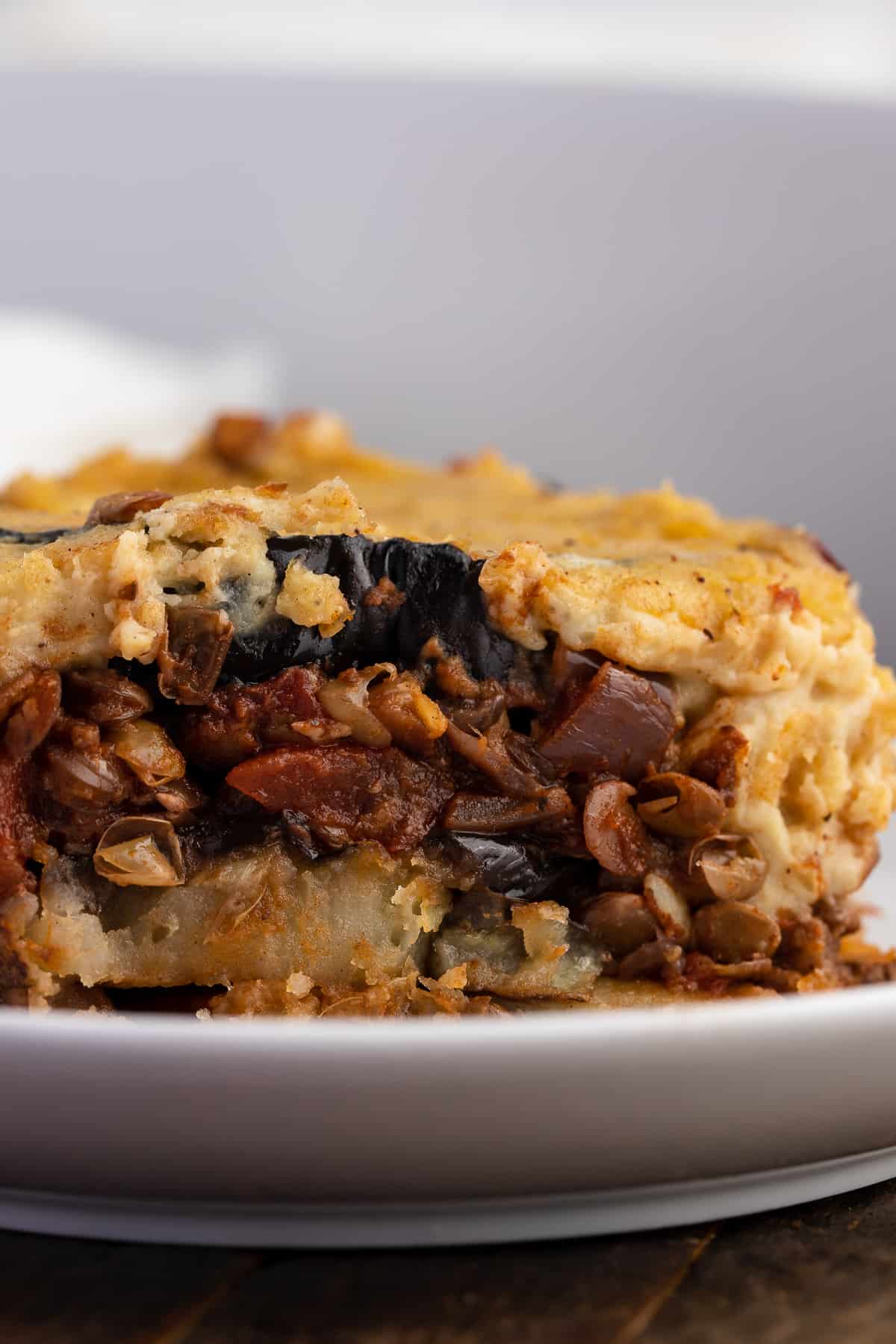 From my experience, this recipe doesn’t freeze very well as the béchamel, filling and potatoes turn soggy when frozen. If you want to prepare it in advance, prepare all the key steps and assemble the dish. Cover it with some cling film and place in your fridge where it will last for 1-2 days. When you want to serve, preheat the oven and cook for approximately 45 minutes to 1 hour.

To store any leftovers, slice them up and place them in airtight containers. You can store them in the fridge for up to 3 days. To serve, place your slices on a baking sheet and reheat at 100C / 220F for approximately 30 minutes until piping hot throughout. 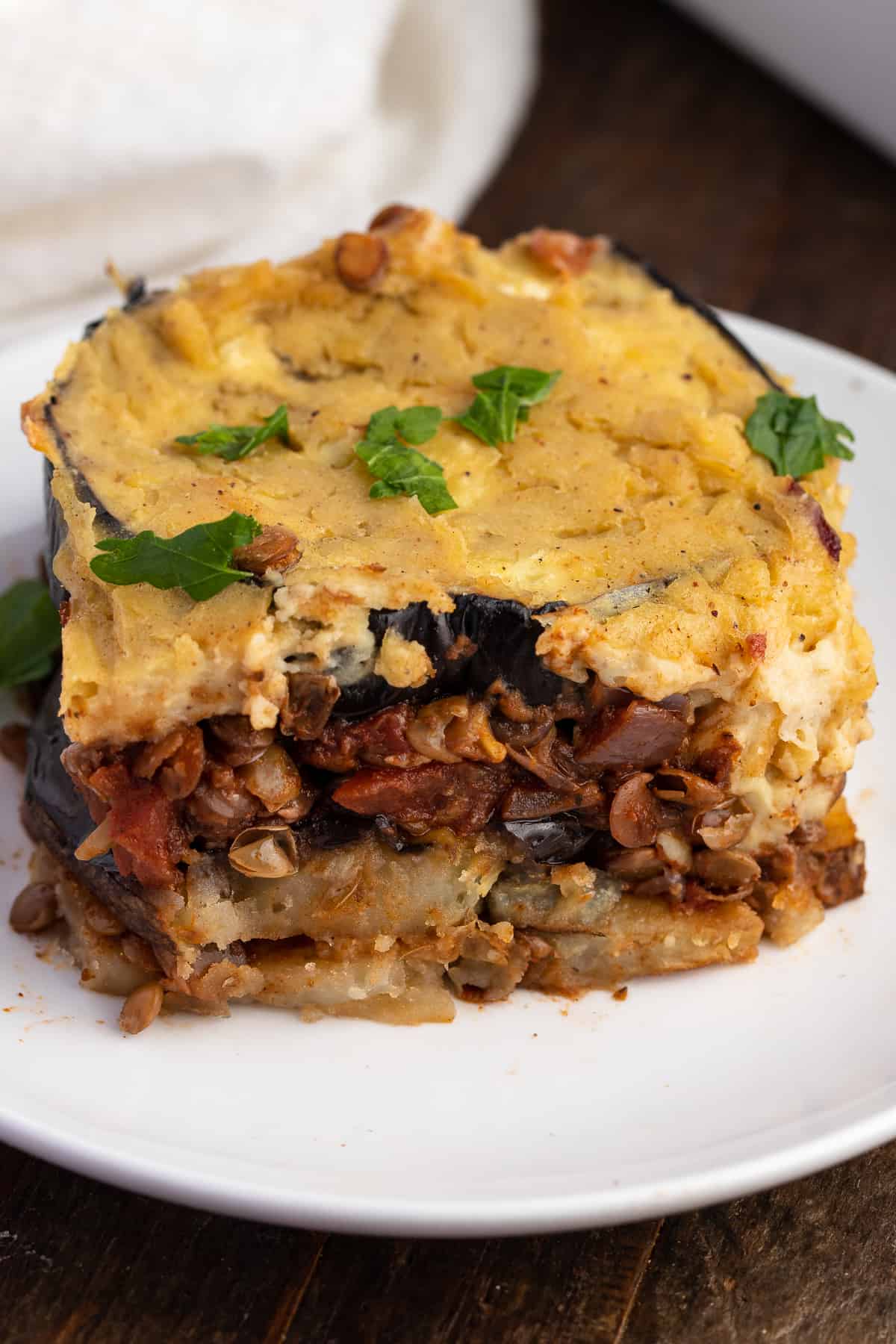 For more Greek vegan and lenten recipes take a look at my hand selected collection below:

And of course my vegan meze platter collection below:

So you love moussaka but you are fasting for lent or you are a vegan? That doesn’t mean you have to miss out on your favorite dish anymore! This is my delicious vegan moussaka with lentils recipe that I’ve specifically crafted, so it keeps the essence of the traditional one, yet is fully plant based!

For the Vegan Moussaka Lentils sauce

For the Vegan Moussaka Béchamel sauce